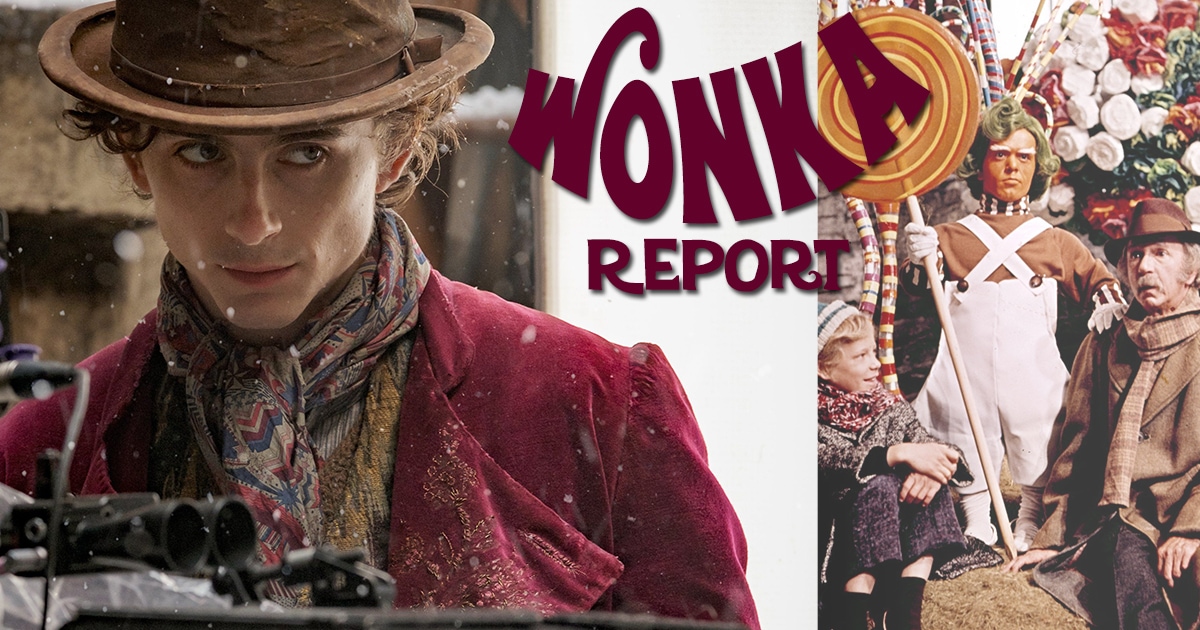 Sometimes the sweeter things in life are worth a wait and while Timothée Chalamet’s Wonka is still a year out, this week we uncovered multiple Scrumdiddlyumptious pieces of news to share. Plot details revelations so shocking that the famous chocolatier himself would be enticed to package and sell it!

Now, this film is a bit interesting as it’s entirely set BEFORE Willy is in charge of his own world-famous chocolate factory. So with that, I’m happy to confirm that viewers will indeed see the Oompa Loompas in Wonka when it hits theaters in 2023.

Our investigation started when Alex Perez, a fellow writer here at The Cosmic Circus, discovered an entry for a “Space Worker” and brought it to my attention. I instantly thought of the Glass Wonkavator, Vermicious Knids, and a need to Scram! If that sounds familiar it’s because these were important elements to the sequel, Charlie and the Great Glass Elevator. A quick search also helped confirm that Narrow Mark is a production title being used for Wonka.

This in-production musical may be a bit more grounded than its predecessors I believe with the unwrappings I’ve come across this weekend. In a recent complaint from Village Roadshow against Warner Brothers, more than was intended has been shared in public documents.

Since they are publicly available the plot points will come out anyway but keep in mind that if you don’t want to see any Wonka spoilers, you may want to step away now! But to summarize from that documentation…

There will be no mention whatsoever of Willy Wonka’s father. Willy and his mother live with a gypsy caravan, she introduces him to his love of chocolate on a birthday with a cake and mentions the “Palais Gourmet shops” (where the best chocolate in the world is found, another casting for a “Posh Shopper” slightly confirms his arrival to the destination).

While Willy is away from the group, he returns to find them gone and their transport burned down in the midst of a war backdrop. (Another interesting point is that we found that a military adviser who worked on the film 1917 listed on IMDb, and many of the vehicles photographed on set are clearly 1930’s styled vintage.) Wanting to make and share his mother’s chocolate recipes with the world is what drives the plot of this movie.

But more importantly, the introduction of Willy Wonka to the Oompa Loompas will differ from past iterations where he extended shelter and cacao bean compensation for labor after meeting them and inviting them back to his factory. Instead in Wonka, he unknowingly steals from the Oompa Loompas’ tree due to a guard sleeping on the job. After the guards’ blunder, the rest of the Oompa Loompa tribe push him to hunt him out and make Wonka pay many times over for his crime. Interestingly enough – this to me is the lesser change of the important characters of the franchise, as they state: “in Wonka the Oompa Loompas will also be depicted very differently than they were in Charlie.”

Back to the Inventing Room

In both movies with Oompa Loompas, they’ve been shown as very little men in colorful clothing and (in the 1971 film) green-colored crazy hairstyles which was an idea strictly for the camera. Quite different from the original idea in the book: “The Oompa-Loompa bowed and smiled, showing beautiful white teeth. His skin was rosy-white, his long hair was golden-brown, and the top of his head came just above the height of Mr. Wonka’s knee.”

Perhaps they come to a closer depiction of the book in choice of hair colors and clothing options. Whether they change the most important aspect – height – remains to be seen.

With this movie also poised as a musical and multiple dancers cast, I would not rule out at least 1 musical ensemble with the hilarious yet ominous performers – maybe even paired with Wonka himself!

Other smaller but intriguing castings The Cosmic Circus staff stumbled upon were for “Slugworth’s Shop Assistant”, Arthur Slugworth was one of the rivals of Wonka who used spies to steal inventions and recipes.

These actions were very important to the plot of the book as they forced Wonka to shut his doors to the public before his idea of distributing gold tickets. It would not surprise me if we see this shop in “Palais Gourmet” briefly in the same manner that we saw the ‘Sizzler’ chocolate bar in the original film on the shelf display above Wonka Bars.

The casting of this character may suggest we get to spend some time inside, whether we see Arthur Slugworth himself is still unknown. If they intend to make more than one film, in this case, I’d rather they kept him as “the man behind the curtain” for a more flavorful reveal later. Although I have a tiny belief that Rowan Atkinson may be filling that role already since his facial control could mold him into a confectionary menace!

I did uncover a couple of other smaller castings that suggest there is a wedding scene, but likely small and unimportant to the overall story. While on topic, I did want to speculate on Freya Parker’s (who has a role in this years’ Jurassic World: Dominion) character of Miss Bon Bon, with no details and lack of mention by outlets.

My best guess is she plays the love interest or a chocolatier that Wonka finds himself admiring. And she has a great character name that doesn’t sound very antagonistic compared to Prodnose, Slugworth, or Fickelgruber.

Multiple set photos also help confirm the promised adventure Wonka embarks on after the death of his mother and extended family. More than one has appeared with the actor (suitcase + bags in tow) riding on top of a wine van with “Moreau & Fils. Grande Choix. Marchand de Fruits de Mer. Tel 328-6” (a winery dating back to 1814) and a shrimp on the door while on a seaside set.

The Great Yarmouth Mercury was able to confirm that Warner utilized the historic steam drifter Lydia Eva, built-in 1930, in Lyme Regis for a scene where Wonka arrives in England. One shows the known actor-comedian Keegan Michael Key in an oversized blue Hussar jacket and walking with Chalamet on a snowy harbor.

Filming in Bath provided a couple more behind-the-scenes looks where fake snow was used throughout the period of filming to make an Everlasting wonderland at night. In front of Bath Abbey church was another vehicle, this time with “Zoological Gardens Security” and a large wooden crate behind it, which is a complete mystery to me at the moment.

Could some Hornsnozzlers, Snozzwangers or Whangdoodles become a nuisance and Willy somehow intervenes to save the day? Likely not, but it’s a Fun Dip into some speculation.

A set video from October even provided a glimpse and a tune filming the lead on top of a truck and what sounds like a sea shanty playing alongside Chalamet’s pleasant singing voice.

The lyrics “now it’s time to show the world my recipe, I’ve got 12 silver sovereigns in my pocket and a handful of dreams” even help confirm the narrative beats we have uncovered. The slight departure of the source material, a refreshing adjustment to the Oompa Loompas backstory, and an adventure in locations as magical as his inventions.

Wonka is set to hit theaters on March 17th, 2023 so we have a while before golden tickets go on sale. What’s your favorite Wonka candy (I like them all except Bottle Caps!)? Are you going to watch this movie in the theaters? Let us know in a comment below or send us a reply on social media!