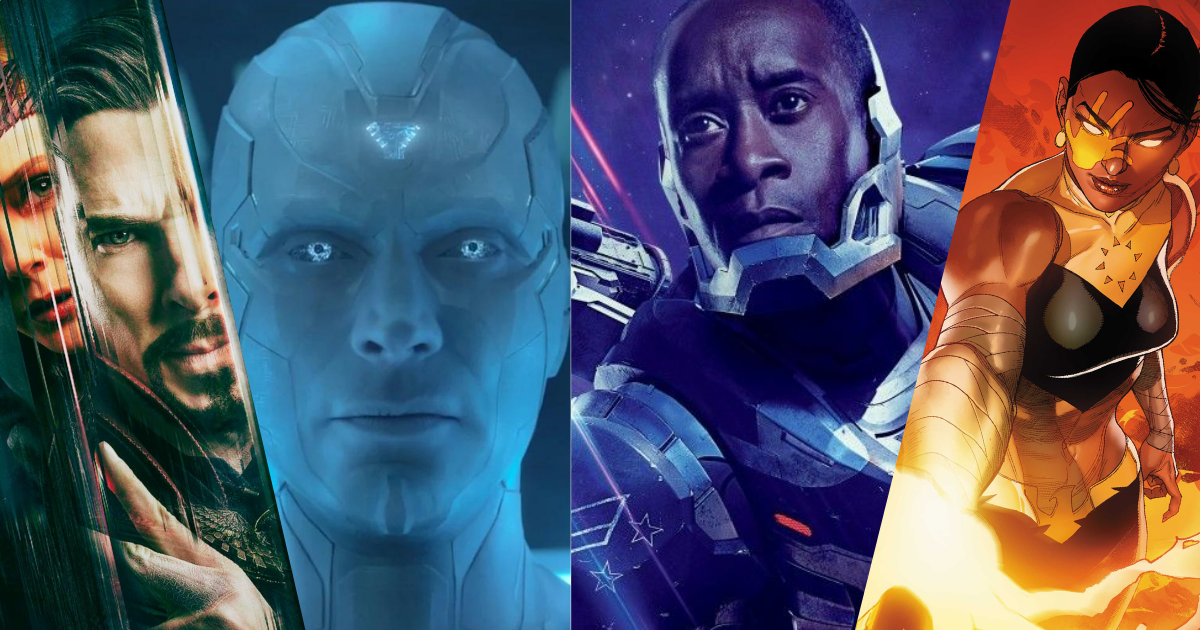 With 2021 coming to a close, it’s safe to say that Marvel Studios had a good year. After taking 2020 off due to the ongoing pandemic the studio released four films and five shows to Disney+.

The year was full of promise and hinted at the future direction of the MCU. So over the next couple of weeks, some of us here at The Cosmic Circus will explore storylines from 2021 and how they could play out in the MCU in 2022 and beyond. Without future ado, let’s start this series off where the year began, with a trip to Westview.

What Happened to White Vision?

WandaVision delivered on many twists and turns throughout its nine-episode run, though none so much as the appearance of White Vision (Paul Bettany). Created from the remains of the original Vision, director Hayward (Joshua Collins Stamberg) activates him in the post-credit scene of episode eight.

The scene still gives me chills during my rewatch as the camera zooms in towards the monochromatic face and the eyes flash alive.  Check out the scene below via Movie Mail’s Youtube!

White Vision’s primary purpose in the finale is to find and destroy Wanda (Elizabeth Olsen). Though bringing about the end of the hex and capturing a second Vision if possible are also high on the to-do list. White Vision contains all the powers of the original Vision, however, lacks the memories and the Mind Stone. His arc in the finale came to a close when Hex-Vision reinstates his memories and he flies off.

White Vision’s introduction was intense and with his memories restored, there is much more story left in him. So where might his story be heading?

Could White Vision show up in Armor Wars?

The first and most obvious place he might show up next is Armor Wars. Hayward states quite a few times how White Vision was an expensive collection of technology. One that can be used as a weapon. Besides the vast amount of Vibranium that his body is composed of, his mind is the combination of J.A.R.V.I.S. (Stark Technology) and Ultron. He has all the makings of a hot commodity for those looking to add to their forces.

Armor Wars is described as a show about Tony Stark’s legacy and those attempting to steal his technology. Seems like White Vision fits that bill. Could different companies or governmental agencies be searching for White Vision? Having that type of weapon at your disposal would be enticing for anyone looking for power.

This new dynamic would provide Bettany with a new perspective for his character and test the limits for this new Vision. He would also be a potentially very dangerous high-stakes challenge for Don Cheadle’s Rhodey to deal with. How will Vision survive or who’s team would he join after his journey of self-discovery?

Or what about Doctor Strange in the Multiverse of Madness?

The next theatrical release for the MCU is Doctor Strange in the Multiverse of Madness. Paul Bettany’s WandaVision co-star Elizabeth Olsen will be reprising her role as Wanda Maximoff/Scarlet Witch and it seems like she and this new Vision are almost certainly destined to meet again.

Stemming from the post-credit scene of WandaVision, it’s believed that Wanda will search for her children throughout the multiverse, after hearing them scream out for her. It’s possible that in her attempt to find her children, she comes across White Vision. A tender moment between the two serves as closure for both, as each continues on their individual journeys. This scene would provide hope for both’ future individually and together.

But what do you think? How will Wanda and Vision cross paths again? Or will they?

Echo is another possibility.

While this may be more of a long shot, I thought an appearance by White Vision in this show could serve as a mirror to Maya’s (Alaqua Cox) journey. White Vision flew off at the end of WandaVision, more than likely to look for answers and find himself after having his memories returned.

Neither the true Vision nor a completely new version, he will feel lost and unsure where he belongs. This is the almost exact same emotional place we left Maya in Hawkeye. Maya will continue looking for answers about the death of her father and who she is now that she is out from underneath Kingpin.

Together the two could help each other find those answers and perhaps some closure to the loss both have experienced. Similar to The Falcon and the Winter Soldier, the unlikely duo could work towards embracing their hero identities, providing a better vision for both of their futures.

Wherever White Vision shows up next, I don’t believe his story is over. Instead, this twist presented in WandaVision breathed new life once again into a character who had been around since the infancy stage of the MCU. His journey to find out who he is without the mind stone and after his destruction will be exciting to see.

Where do you think we’ll be seeing Paul Bettany’s White Vision next? And how do you think his story will play out? Let us know in the comments or on Twitter @mycosmiccircus!