With reports of The Mandalorian season three finally in production after a long hiatus, let’s take a look at the hit Star Wars series and what we may expect to see next.

The previous season of the show ended on quite a surprising bang, with none other than Mark Hamill’s Luke Skywalker himself showing up to save the day and rescue Grogu, presumably to train him to be a Jedi. Such a surprising revelation has left fans contemplating the future of the show. Some have felt that the show relied too heavily on Grogu and Mando’s quest to find a safe haven to survive the Empire’s relentless pursuit.

In season three, it seems as though the show will have a chance to finally branch out into new territory besides just protecting Grogu. It’s likely for the majority of the season that Grogu and Mando will continue to have parted ways, and gone off on their own adventures. Since the show is called The Mandalorian, this upcoming season will undoubtedly focus on Pedro Pascal as Din Djarin and his future endeavors, with perhaps only references or brief appearances by the beloved Grogu (at least to start off).

The first and most important plotline for the show is Mando’s journey, as it’s his show. As much as we would love to see the father-son dynamic continue throughout season three between the Mandalorian and Grogu, I feel it’s likely the season will delve into other important topics of the show such as the homeworld of the Mandalorians, Mandalore.

We left off with Bo-Katan (Katee Sackhoff) and Mando seemingly in a standoff over the Darksaber that was taken from Moff Gideon (Giancarlo Esposito). As we learned, the Darksaber can only be obtained through combat and therefore Din Djarin is the rightful owner of the saber for now. This means a showdown between Bo-Katan and the Mandalorian is likely to take place at some point during season three. The outcome of that duel as well as Bo-Katan and Mando’s friendship is likely to be a major plot point of the next season with the outcome remaining to be seen. 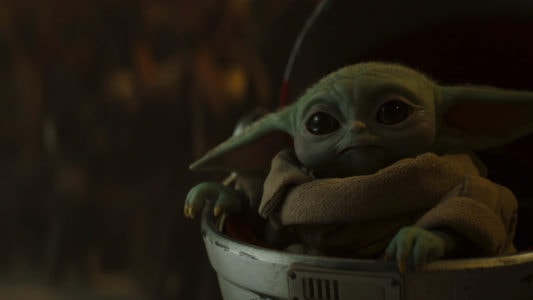 The next storyline to touch on is where did Grogu go? The final shot of season two saw Grogu, Luke Skywalker, and R2-D2 all leaving Moff Gideon’s imperial light cruiser. It is currently unknown where they went but many fans have speculated that Grogu goes on to join the group of young Jedi, including Ben Solo, to be trained by Luke Skywalker. If that is the case then it seems unlikely that we see Grogu much if at all during season three, which would be a massive disappointment to many fans.

Another scenario is that Grogu masters his abilities and rejoins Mando at the end of the season to help turn the tide in the war against the remaining imperial troops. Perhaps even help Din Djarin and Bo-Katan reclaim their home of Mandalore. While we may not see Bo-Katan and Mando reclaim Mandalore in season three, the show certainly seems headed towards a big showdown in Mandalore.

After watching two seasons of The Mandalorian, we know by now to expect all sorts of cameos and characters to be introduced each season. Last season specifically, we saw a number of cameos and character appearances such as Ahsoka Tano, Boba Fett, Bo-Katan, Cobb Vanth, Koska Reeves, Frog Lady, and even a name drop of the infamous Grand Admiral Thrawn.

I expect a mix of new and old characters to return in season three. I fully expect Katee Sackhoff’s Bo-Katan to return in an expanded role along with Carl Weathers’ Grief Karga and Mercedes Varnado’s Koska Reeves. Other returning members could be Timothy Olyphant’s Cobb Vanth, Ming-Na Wen’s Fennec Shand, and Temuera Morrison’s Boba Fett. At the moment, I feel as though Ahsoka Tano is less likely to be in season three as she’s likely off searching for Grand Admiral Thrawn. However, it is likely that the Mandalorian and Ahsoka Tano will cross paths again one day. In terms of new characters introduced to the show, seeing a mix of returning characters from the Clone Wars, Rebels, and other Star Wars productions as well as more original characters would make a great deal of sense for the show. One established character fans have been itching to see in The Mandalorian is Sabine Wren, a fellow Mandalorian last seen searching with Ahsoka Tano for the lost Ezra Bridger. While this storyline is likely to be explored in the Ahsoka Disney Plus show, Ahsoka Tano was not currently with Sabine Wren when we saw her in season two. So at that time, it appears she’s somewhere else, but could still wind up encountering our favorite Mandalorian, Din Djarin.

Overall, seeing season three continue to build on the larger story of the series would be an efficient way to get things back on track. The absence of Grogu may hinder the show in the beginning, but I wouldn’t expect him to be gone for too long as Disney knows fans love him so they can’t do without him for very long.

What would you like to see from The Mandalorian season three? Leave us a comment below or tell us on social media!