‘What if…? New Trailer Breakdown 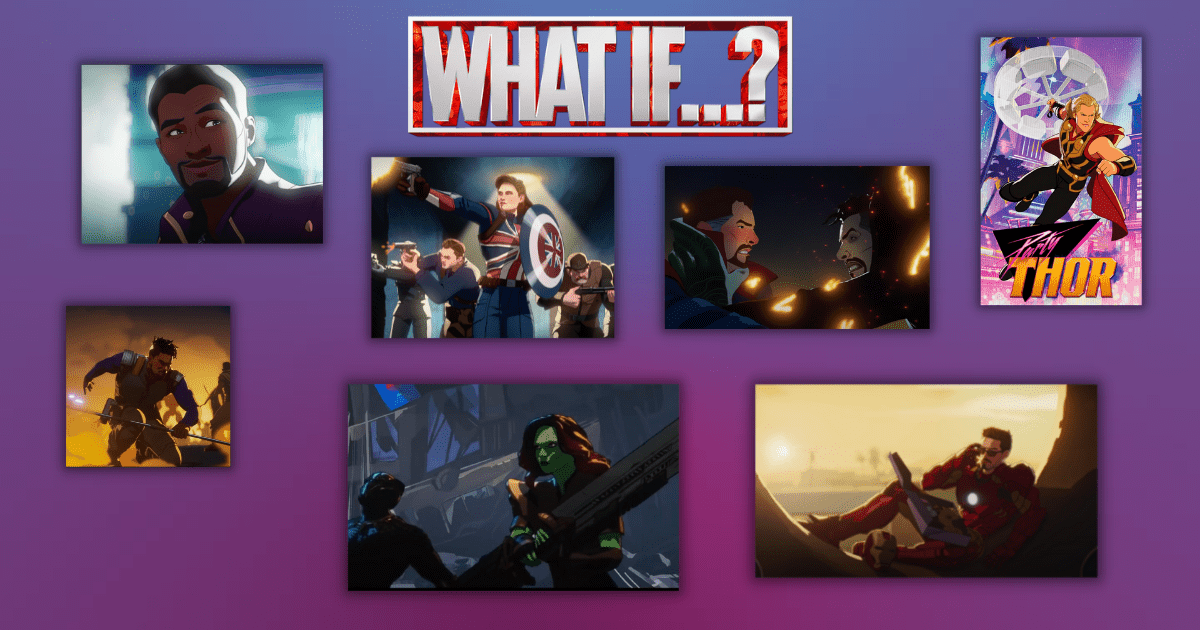 ‘What if…? New Trailer Breakdown

Marvel Studios dropped another new look at the Disney+ series What If…? yesterday. In the thirty-second clip released in a tweet from Marvel Studios, we get a few glimpses of what’s to come in the ten episodes releasing on the streaming service beginning August 11. Let’s explore the clip and see if there are some answers to some of those big “what if…? questions.”

It is widely known that Hayley Atwell is reprising her role as Peggy Carter from Captain America: The First Avenger and the popular ABC series Agent Carter. Her transformation in a pod is shown as a metallic blue liquid is pumping into the machine and Howard Stark looks on slightly worried. The scene is very similar to Steve Rogers’ (Chris Evans) transformation in Captain America: The First Avenger.

It then cuts away to a scene where she flips and lands in her hero pose, smashing her United Kingdom-inspired shield into the ground. Her suit shares many similarities with Captain America’s from the movies, though instead of the traditional Stars and Stripes, the chest is emblazoned with the Union Jack.

This episode of What if…? at first appears to be a closer interpretation of its MCU film counterpart, where Captain Carter is created for the sole purpose of kicking Nazi butt along with a scrawny Steve Rogers suiting up in his own Stark designed Hydra stomper suit. However, how will that one event change the course of the film? Perhaps Peggy still loses Steve but in a more permanent way. An explosion, a death, and then a grieving Peggy must move onto her next mission. Not only would that fundamentally change from the course of the sacred timeline, but it would also leave scars that she may never heal from. Especially if she never got her dance with him.

But hold on! Later in the trailer, we see a suited-up Peggy with her shield in one hand and a large silver sword in the other. The sword is a different choice from her usual fist or occasional gun. Though another flip later and Carter dives into a mess of slimy tentacles, believed by many to be attached to Shuma-Gorath (a rumored villain in the upcoming Doctor Strange In the Multiverse of Madness). Known to be the ruler of hundreds of universes and with the ability to alter realities, Shuma-Gorath would be the perfect big bad for a show about exploring the multiverse. If he can alter realities, is he causing many of the what-if changes? Or is he just feeding off the chaos left by the branches?

Already this tells us that we’re in for something wildly different from what we’re used to with the Marvel Cinematic Multiverse. Through different promotional material and leaked merchandise, it appears that Captain Carter will lead the Guardians of the Multiverse. Which consists of other heroes with new spins on their characters as well. Being a good soldier is in the genes of Carter as well as being a good person. So I am excited to see who her team consists of and how they will save the multiverse from impending doom.

In a “blink and you’ll miss it” scene Gamora is shown clad in Thanos armor from Avengers Endgame and swinging the double-edged sword that her Grimace-faced big bad dad is known for. It seems in this reality at least, Thanos achieved exactly what he wanted when he abducted Gamora from her home planet. A daughter who would take up his mantle and continue his mission.

Will we see a version of Gamora who helps Thanos conquer worlds and rid the universe of half of all population? Or perhaps one who wears her father’s armor as a badge of honor after defeating him once and for all? Either way, the look on her face was one of anger and vengeance. So probably best to stick to watching her from a safe distance, from the safety of your Disney+ account. At one point in the trailer, the face of Vision appears, though his face is distorted with anger or disgust. Right away it seems like this is not the incredibly hilarious and innocent Vision who joined the ranks of the Avengers. The pink face is also encased in the shiny silver metal casing that resembles Ultron’s face in Avengers: Age of Ultron. This appears to be a “What if?” about if Ultron was able to complete his evil scheme and took over Vision’s body.

That was his intention from the beginning. His “vision” for a better future. though in reality his better future was killing and enslaving the human race. We haven’t explored many possibilities with Avengers losing. Except for Avengers Infinity War. It could be interesting to see what the world would look like if they had lost a battle earlier on. An apocalyptic hellscape run by a puppet off his strings. From what we know Natasha Romanoff is in this episode, perhaps as the leader of a rebellion against Ultron’s vision.

A few seconds of the footage showed Bucky Barnes from his Captain America: The Winter Soldier era, long floppy hair and all. We observe him fighting a zombie version of his best friend Steve Rogers, who for some reason still has his shield. It appears the story was flipped from The Winter Soldier for Bucky to be the heroic one, navigating a world full of fan-favorite heroes who are looking for a bite to eat. What other heroes are still alive in this world? Is Bucky by himself in this fight? I believe that in much the same way Steve Rogers (Chris Evans) attempted to save Bucky, Bucky would fight and try to save his best friend, if possible.

You got a friend in me

Meanwhile, Tony Stark’s story also seems drastically changed when instead of being captured after the infamous explosion from Iron Man. He’s saved by Killmonger. Killmonger is shown to launch the bomb like he is Tom Brady at the Super Bowl. A second scene shows the two unlikely allies standing on a stage, acting rather chummy. Could this be an indication that Wakanda comes out of the shadows at a much earlier date than we saw at the end of Black Panther? I could see Stark working with the Wakandan people in hopes of expanding their technology to the world. Together they could protect the world from onslaughts of villains but also help with such things as medical advancements. But it’s the events of the first Iron Man that made Tony first learn the evils of his past business practices, and how dangerous it is for Stark weaponry to get into the wrong hands. So how would not learning that painful lesson in the same way, affect how Tony behaves? How does that Tony even come to create an Iron Man suit? Perhaps these questions would and should be answered by the What if…? episode.

In another episode, we see a child version of T’Challa abducted by Yondu’s ship. Similar to the scene in Guardians of the Galaxy where Peter Quill is abducted. T’Challa is dressed in clothing similar to Black Panther and brandishes a spear at the approaching alien ship. I do think it’s odd that T’Challa appears to be abducted near his home, especially when you consider the shield that is protecting Wakanda. Perhaps the shield doesn’t exist yet, or maybe T’Challa has wandered too far from home. Later he is shown growing up, in an outfit, this is reminiscent of Star-Lord’s (Chris Pratt) outfit in Guardians of the Galaxy. Except for more purple, naturally.

Towards the end of the trailer, a young-looking Shuri appears to be speaking with someone whom she indicates they have a common enemy. . She indicates that they have a common enemy, whoever it is. The intercut of the trailer is tricky, and it is made to look like she’s talking to Killmonger, before a big battle, but that could easily not be true. Remember trailers are often made to mislead, create red herrings, and keep surprises, a surprise.

Also, what were those robots marching onto the field? They looked reminiscent of the ones created by Justin Hammer (Sam Rockwell) in  Iron Man 2. Perhaps he is connected to the story as well? Hmmm…

With each episode containing a major twist, it won’t be long until the connected world of What if…? is changed so drastically, we no longer recognize it from the films. What seems to begin as a riff on our favorite MCU stories will become an entity all its own.
What if…? will stream exclusively on Disney+ beginning August 11. New episodes drop every Wednesday.

Check out the new What if…? trailer via our official Twitter below!