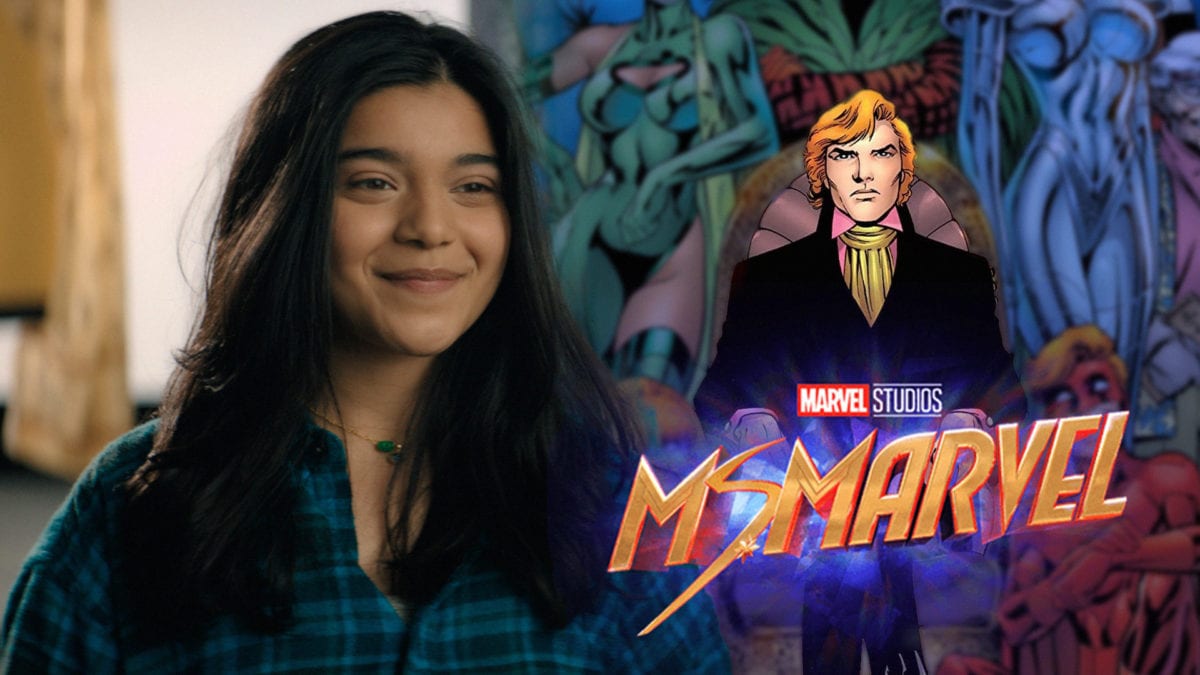 For many months now, rumors have been going around about changes to Ms. Marvel’s origin story, and power set, and fans have been wondering if we’d even see the Inhumans in the upcoming series or not. Like any good little scooper, I’ve been listening and watching and hearing things and comparing notes, all along. Unfortunately, much of what I’d been hearing about Ms. Marvel left me troubled, scratching my head, and a bit hesitant to talk about it – so I’ve mostly kept my mouth shut. One of those head-scratchers (followed by a quick search on Google) came early this year when I heard who the villains/antagonists were in the series: ClanDestine.

Found it? Okay. Moving on… ClanDestine, a family of half Djinn super-beings, is one group of antagonists in Ms. Marvel. The other being a government organization called N.I.C.E. led by Alysia Reiner in a currently unnamed role. You may recall that Reiner was caught filming by paparazzi back in May. (see Just Jared image here, and a clear pic of the N.I.C.E. logo here)

Now both N.I.C.E. and ClanDestine being in it has been rumored in certain spoilery corners of the internet (Various Discords, MarvelStudioSpoilers Reddit, The Cosmic Circus’ work Slack) for at least a couple of months now. Most recently a fairly new site Movie Scope has come out with a report saying they have heard this from sources as well, and yes I did notice that making the rounds a bit yesterday on Twitter.

With all that being said, I will confirm now that yes, I have heard that as well from my own sources early this year. (see video proof dated March 25, 2021 below)

When I first heard this, as I already mentioned, I was pretty befuddled at this out-of-left-field choice of villain. I wondered for a while if it could be an alternate on set name for the Inhumans as they tried to hide them from leakers. They do sometimes do that, as they did this on Loki with Ravonna Renslayer (she was known as Ms. Alternity for a while on set in order to hide the involvement of a certain conqueror).

I trusted my original source a lot, but I was also like… really? And wondering why in the world they weren’t using more known and popular Ms. Marvel villains for this, ones that have been rumored. Because up until then at least, there wasn’t one word about the ClanDestine being in it from anyone that I could find. But as I’ve been talking to people and watching rumors pop up about it, it became even more clear that this really random group of Marvel characters with no real tie to Ms. Marvel are indeed in the series.

One thing that’s odd is that there’s been no leaked casting for these characters, at least none that would match up with Adam Destine and the ClanDestine family as they were originally represented in the comics. Take a look at the image below. One of ClanDestine in the comics, the other being an image of what is assumed to be the main villain group in Ms. Marvel, from the recent Disney+ Day teaser… Do these two groups look anything alike to you? So it would seem that there will be a pretty drastic change in that family and their back story as well. They’re not the only ones, as anyone who has been following spoilers and rumors about the series has been noticing. For instance, rumors have indicated that Kamran is one of these ClanDestine, but he isn’t in the comics, he’s an Inhuman. Even his double (who has since deleted this listing from IMDB) said so…

I know that screenshot comes from “take it with a grain of salt” IMDB but it’s still an odd thing for the guy to specifically put in there unless he thought that’s what his role was because it was. But I suppose it could have been a mistake from confusion, like the rest of us, over the apparent drastic character changes for this series. Admittedly, part of me was hoping these ClanDestine & Djinn rumors were wrong too, especially after I saw the upset fan reactions to those rumors as they started to come out. Especially upsetting to fans has been rumors about Kamala having a connection to the Djinn (aka genies) and possibly really drastically, inexplicably, and potentially very inappropriately, changing her origin story.

As for my opinion on, “Is she or isn’t she?” I’m admittedly still undecided. After I was initially told by a trusted source that she was still Inhuman, it was corrected later that she just wasn’t called that in the series. But even excellent sources can be wrong from time to time, unfortunately, and other evidence has not exactly supported that claim. It’s always best to keep in mind that no source or scooper online has all the puzzle pieces to have every twist and turn to these projects. No matter how inside the insider claims to be, there will always be stuff that Marvel manages to keep from the leakers. So I think it’s best to be patient and see what the final form the series takes, before judging too harshly stuff we “hear” and don’t like.

The reason I haven’t entirely lost hope that she is Inhuman is that it’s possible that this Kamala is Djinn rumor is, in fact, a “red herring.” That perhaps Kamala will go on an emotional journey in the series with a late-season discovery as she learns who she truly is: Inhuman. Or alternately, what if the ClanDestine are in fact changed to Inhumans but are just being called Djinn as well? It could be sort of like the whole science and magic are the same discussion between Thor and Jane in the first Thor film. If magic and science are the same in Thor, then that goes for the rest of the MCU too, right?

But the above is speculation from me, for the most part, and I’m sure at least some of you probably think I’m just in denial here. Maybe I am. I’m sure I’m not alone. But either way, I’ll repeat that I think we have to wait and see what they actually do and the context in which they do it, in the series itself, before we judge any changes too harshly. When all is said and done, Iman Vellani looks like perfect casting for Kamala and seems like a truly lovely person, it would be a shame to not support her and her role as Marvel’s first Muslim superhero in whatever ways we can.

Rumors of a power set change for Ms. Marvel herself, as well as rumored backstory changes that include her being one of the Djinn like ClanDestine as well, have left Kamala Khan fans troubled and angry. But, despite some leaked marketing for Ms. Marvel seemingly confirming the long-rumored “purple Lantern” crystal powers, all hope is not lost.  The series isn’t expected to be out until Summer 2022 after all, with some significant reshoots planned. Here’s hoping that Marvel and the Mouse have heard our concerns and correct at least some unnecessary changes/mistakes before the show hits Disney+.

How do you feel about these changes to Ms. Marvel or the addition of the obscure ClanDestine into the series as the antagonists? Let us know in the comments or on social media!