Little is known about the actual plot of Thor: Love and Thunder, but based on new toy images from the S.H. Figuarts line, we may have some exciting speculation about The Mighty Thor and her new hammer!

While discussing the new action figure images yesterday with the rest of the Cosmic Circus team, it was pointed out by Alex Perez and Brian Kitson that Jane’s Mjolnir seemed like it could be changing its shape. Alex even suggested the idea that her hammer could form any other shape she wanted as if it was some kind of malleable weapon. To me, their speculation immediately points to Undrjarn, Jane’s brand new weapon in the comics. At the end of War of the Realms in 2019, Jane’s Ultimate Mjolnir is destroyed entirely. But the pieces of the hammer immediately return to Jane and reform into a new item called “Undrjarn the All-Weapon.”

This is a new tool (not a hammer) that can take any shape imaginable. The idea is that Mjolnir was formed into a hammer because that’s what was most suitable for Thor at the time of its forging. However, now that the hammer has been destroyed, the material is free to match any shape the user needs, including weapons, wings, a shield, or even a communication signal. What should also be immediately noticeable is how the gold color on the toy is similar to Undrjarn’s golden color in the comics. While there could be any number of explanations for what the yellow spikes represent (eg. an explosion), Jane’s stance seems like she’s holding it as a weapon. Furthermore, the shape of the spikes themselves suggest the form of a short-handled mace.

Additionally, both these toys and previous image leaks have shown that Jane’s hammer will have cracks. These cracks indicate that her hammer was likely re-created from the shards of a destroyed Mjolnir, similar to the idea of how Undrjarn was made in the comics. These cracks and shards could also be connected to how the hammer then reshapes into other weapons. You’ll notice there seem to be bits of the hammer in the image of the figure and her weapon above.

Since the Undrjarn is a very recent comics development, it would be exciting if we’re seeing it brought to life in the movies already. This could even be a surprisingly accurate adaptation since the MCU already has a broken Mjolnir that Jane could repurpose.

Adapting the Undrjarn now also suggests that Taika Waititi could be streamlining the Jane storyline, as the Undrjarn didn’t form in the comics until after she ended her time as Thor. Simplifying Jason Aaron’s mammoth Thor saga isn’t a surprise for the movies, and I’m happy to see that MCU Jane’s weapon could be even more powerful than Thor’s. 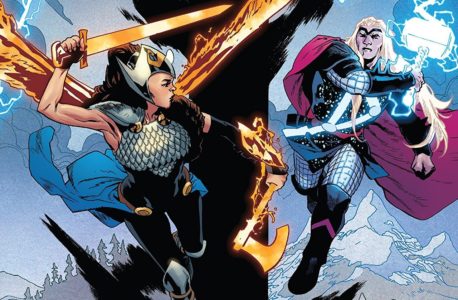 It remains to be seen how and why Jane exactly will acquire the pieces of Mjolnir or how they could possibly reform into Mjolnir/Undrjarn. All that we know is that the sacred requirement of worthiness must also apply to Jane Foster in order for her to become the new Thor.

Set videos from last year revealed a scene with Natalie Portman’s Jane being hoisted into the air above near what is believed to be a shrine to the broken Mjolnir – could this be the moment the hammer shards reunite? Does Jane’s presence trigger Mjolnir/Undrjarn to reform, deem her as worthy, and bestow the title of Thor upon her?

Video of Natalie Portman’s stunt double on the set of Thor: Love and Thunder today

In examining more images via The Daily Mail, you can see Natalie Portman as Jane looking at some kind of bubble-protected shrine with what looks like a stone in it (if you look carefully), and getting quite close to it before a guard nearby is mysteriously pushed away (in another Daily Mail image). This obviously takes place before the video above.

You’ll notice this video of what most people believe is Jane transforming is very close to that area, and there appears to no longer be a bubble over the object in that image. In addition, if you look closely at the first image in the tweet below, you can see a piece of stone that almost certainly is part of Mjolnir.

Tessa Thompson and Natalie Portman with Taika Waititi on the set of Thor: Love and Thunder

But the question then is, how has reforming and being connected to Jane now changed, Mjolnir? Perhaps this new Mighty Thor action figure gives us a clue and hints at a powerful alternative weapon for Jane taken straight from the comics. Much remains to be speculated on and uncovered, but stay tuned to the Cosmic Circus as we try to figure this out together!

What do you think? Would you be excited if Natalie Portman’s Thor got a cool new weapon like this? What are your Thor 4 theories? Let us know on social media!

All images courtesy of Marvel

For More on Jane Foster and Mjolnir in the comics, check out the Mighty Thor Comics Reading Guide!