Theory: Potential Future for Kate Bishop as a Vigilante with Help from The Swordsman 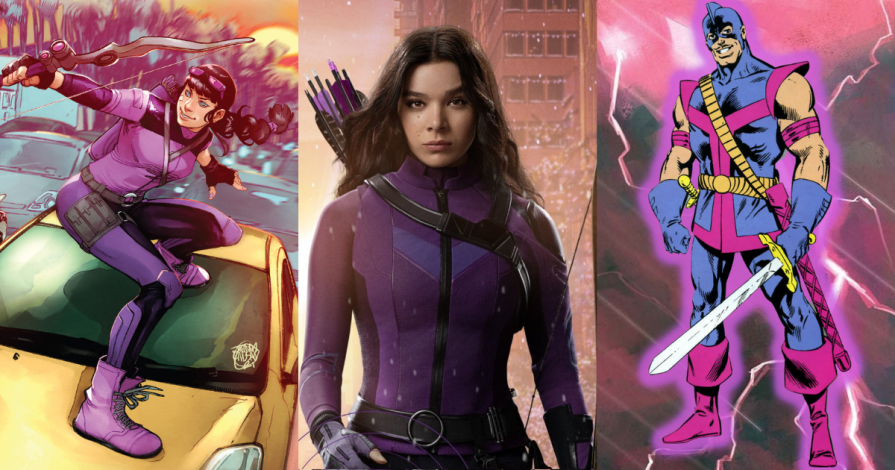 Theory: Potential Future for Kate Bishop as a Vigilante with Help from The Swordsman

Marvel’s latest Disney+ show ended with the future of Kate Bishop being left rather ambiguous, in terms of where she will show up next, and what exactly she wants to do now that she’s on her own. In this article, I’ll discuss the future of Hailee Steinfeld’s Kate Bishop once again, as a continuation of my previous article about the possible street-level futures of Kate Bishop. This theory for her future, in particular, hasn’t been explored in the MCU as of yet, at least not with brand new superheroes.

By the end of Hawkeye, Kate Bishop no longer has family, outside of the Barton’s and her almost step-father Jack (Tony Dalton). As a result, we can assume that Kate will most likely try to make a life for herself as a new superhero, being Clint’s current partner and all.

Hawkeye ends with Jeremy Renner’s Clint inviting Kate to meet his family, and showing a more vulnerable side of Clint. On the other hand, Kate is now in a far more dangerous situation than when she started. Her identity has been exposed to the bad guys, her mother betrayed Kingpin and then was exposed for her own crimes and sent to jail, her father is dead or missing still.

According to our own Editor-In-Chief Lizzie Hill, early plans for the Hawkeye season finale had Kate’s father Derek actually come out of hiding and return to her alive. If they use this twist for later seasons of Hawkeye or Kate’s story elsewhere then this could also add to the danger for Kate. Her parents’ past association with the Kingpin (Vincent D’Onofrio) puts Kate at significant risk for retaliation from the crime lord (assuming as most everyone does that he survived his last moments in the finale somehow).

I believe an alternative future could be in store for Kate Bishop, where she ventures solo; away from the Barton family, dishing out justice on her own terms. This is based on the comics, as well as a personal belief that Kate could be a very interesting vigilante. The ending of the Fraction run of Hawkeye also acted as inspiration for this idea.

Throughout the Hawkeye series, we are shown that Kate is not only incredibly independent but also very impulsive, and acts on her feelings almost immediately. Similar to Clint following the Snap, there is a chance Kate will try to find out just where everything connects in regards to her family’s involvement with Kingpin.

For instance, she could look into what they did for him over the years, especially after her mother had such a large involvement in these activities. This exposure could then get her into more scrapes with bad guys as she works to take them down and right wrongs that her mother may have been responsible for as much as Kingpin. Kate would most likely take a less violent route than Clint, however, given her horrified reaction to Clint’s admission of guilt about The Ronin.

There are many factors to include about Kate’s current situation that may make it more likely for her to become a vigilante. Firstly, during the course of Hawkeye, she has seen:

Secondly, the Barton family is clearly tired of the constant risk they face as a result of their parents being Current/former secret agents and heroes. Kate would most likely not want to risk any danger to the Barton family now that she has become a target to criminal organizations. While Kate may wish to venture solo, she could have a new partner, one that isn’t related to Clint, but rather her mother.

The Swordsman and the Hawk

Jack Duquesne, aka, The Swordsman, is played by Tony Dalton in the Hawkeye series. In the original comic storylines, Jack is actually a villain, and the original mentor to Hawkeye, who eventually turns on him and creates a very bitter rivalry with him.

In the show, however, they subverted expectations and had Jack play a far minor role, and be (mostly) innocent throughout the show. Despite his innocence, he clearly has experience in areas that most would not, or certainly wouldn’t have a reason to hide, as his Swordsman experience is evident, allowing him to spar with Kate very easily.

Jack may not be a villain, but there are lots to this character to explore, and he may approach Kate and still attempt to take that step-father role if she is willing to allow him into her life following her mother’s arrest.

Kate becoming a vigilante means she would require immense amounts of training, and Jack could be her teacher. It was clear from the fencing match they had that Jack was holding back and testing her skills even then, and his fatherly fondness for her makes it seems quite natural for him to train her further in swordplay. This mirrors the relationship the original Hawkeye had with Jack in the comic’s timeline.

This could mean Kate could become a dual wielder of both the bow and sword in her crime-fighting, which also lines up with her comic character. One of her first introductions involved her wielding a sword and bow in an undercover mission, proving she is well trained in both areas, even as the ‘new’ Hawkeye. The above image displays her wielding these weapons, which include Hawkeye’s bow, The Swordsman’s sword, and Mockingbird’s battle staves.

Kate Bishop is a brand new character, and while this is a little far-reaching to assume she’ll become a vigilante, wielding sword and bow across the country, I believe it is still a likely possibility. I’d be very interested in seeing Marvel take this route for Kate.

We’ve seen enough of Kate realizing that superheroing isn’t as cracked up as it seems and that there are many consequences to its troupe. Allowing Kate to accept the consequences that come with being a hero straight away, and instead determine how she wishes to dish out justice, solo or alongside Jack, would be a unique take on a new superhero in the MCU.

Normally, I’d say that she should remain with Clint, but in the MCU, he has a family, with children. The circumstances are different here, and Kate knows all too well what it’s like to lose a family. This idea means Kate explores the world as she deems fit, and will do whatever she can to bring down the criminals that associate with her family.

The major difference between her and Ronin, however, is Kate has a different sense of justice, and would most likely just leave her enemies unconscious and available for the responsible authorities to collect.

Time will tell, however, and the future for Kate Bishop is uncertain, but most definitely exciting. Do you believe this idea would be good for the character? Or do you think a different path is best for Kate? How would you react if this path is what the future holds for her? Let us know in the comments or on Twitter @mycosmiccircus, and please share it around, we’d love to know what everyone thinks!