Theory: ‘Hawkeye’ and Presenting the Sins of the Father from Both Sides 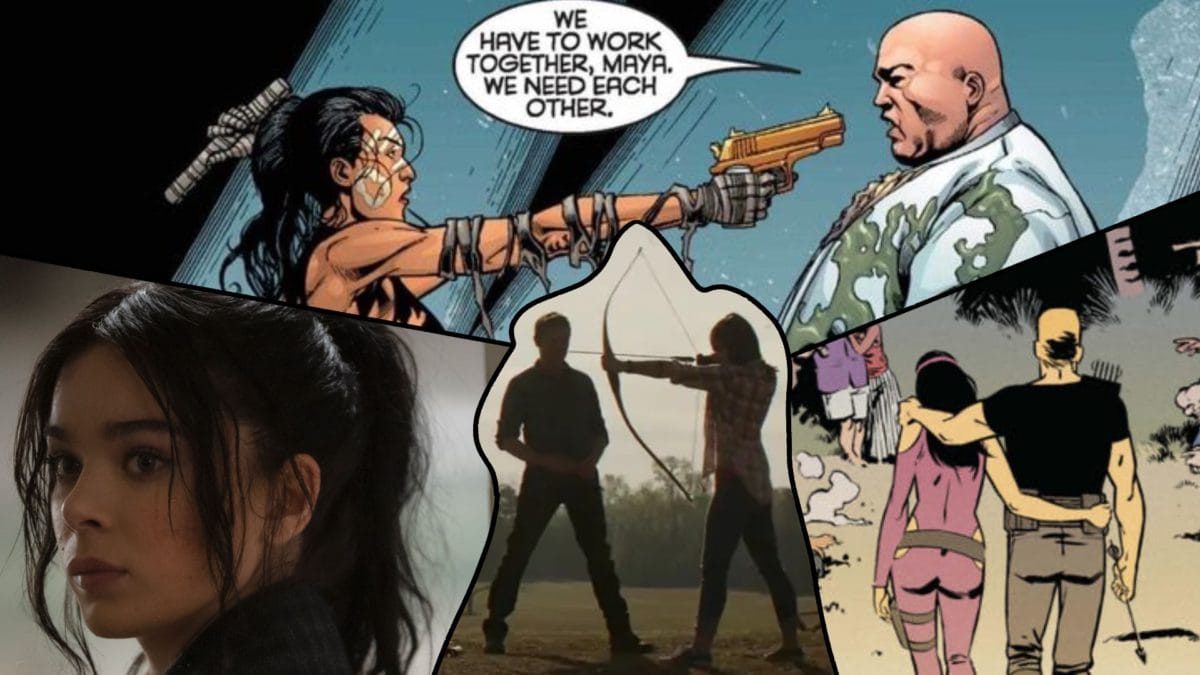 Theory: ‘Hawkeye’ and Presenting the Sins of the Father from Both Sides

Disney Plus and Marvel Studios’ newest series Hawkeye just kicked off last week, and the two-episode premiere was satisfactory. Now, that’s not the glowing review I wish it could be, but at the very least I can say that this show has presented something with the potential to affect me incredibly deeply. After a little bit of brainstorming, I am dying to talk about the potential themes of Hawkeye and why it could be the most emotionally rooted Disney Plus Marvel show yet.

WARNING: Potential spoilers for Hawkeye episodes 1, 2, and the rest of the series.

Ever since 2015’s Avengers: Age of Ultron, the importance of Clint Barton’s family was established. In every subsequent appearance of Clint (Jeremy Renner), that importance has been more and more reinforced. In Captain America: Civil War, Clint had retired and gone away before being called back. In Avengers: Endgame, Clint looks incredibly happy to spend his time under house arrest bonding with his family. Then, we see the repercussions of what happens when that family is taken away from him.

This show then wastes no time reassuring the audience that Kate (Hailee Steinfeld) has (or had) just as strong a relationship with her own father before his tragic (but unseen) death during the Battle of New York. Their relationship was so strong even, that when Kate is perceived as in distress and Derek (Brian d’Arcy James) asks who should go get her, Eleanor (Vera Farmiga) answers rhetorically in a way that suggests Kate would obviously rather see her father. Right away, the show is preparing the audience to walk down the road of fatherhood.

I don’t think it’s an accident that in the same moment that Kate’s father (presumably) died, she sees Hawkeye and witnesses the very thing that will inspire the choices through the rest of her life up until we see her in the show. In that very same way, I don’t think it’s an accident that Kate and Clint’s relationship starts to grow once Clint’s kids are sent away. It sets the stage and plants this idea that the two will be a surrogate for each other’s father and children; especially when Kate acts fairly childish toward Clint like a daughter might, and when Clint does fatherly things like tending to Kate’s wounds.

I had this thought recently about Clint’s relationship with the persona of both Hawkeye and Ronin. Hawkeye was an identity created to protect everyone from danger, and given his relationship with them, you kind of get the idea that he was inspired to do so by the birth of his kids. Then, once taken away from him, Clint becomes the Ronin; a force of revenge and retribution dedicated to doing whatever he can to get satisfaction and justice from the universe for taking his family. It’s an idea that I think is awesome, and I’m glad they’re exploring that more, and I think it has implications for the rest of the show.

That darkness presented in Ronin, and the duality we now see in Clint could be present in Derek. Because the show chose to connect the two and make Clint the surrogate for Derek in the eyes of Kate, I immediately began looking for ways that the two could potentially be the same. Well, just as Clint has Ronin, Derek might have a dark side of his own. Although the comics are hardly ever treated like scripture and followed to a tee, I think it’s important to note that Derek Bishop from the comics had ties to the West Coast Masters of Evil. There’s also the shady way that Derek died because when it’s never explicitly shown on screen, people are always going to have questions. I think I have the big, round, white, powerhouse of an answer: Wilson Fisk aka Kingpin (Vincent D’Onofrio).

While Kingpin has been rumored to appear for quite a while, I think the exploration of the theme of fatherhood even further supports the possibility. Assumptions and eventual reports about Fisk’s appearance had always been tied to the inclusion of Maya Lopez aka Echo (Alaqua Cox), who is Kingpin’s adopted daughter in the comics. You heard that right: here I sit speculating about the thematic importance of fatherhood, sins of the father, and otherwise, and right in front of me was the inclusion of Wilson Fisk as Echo’s adoptive father.

So here’s where I think the rest of the Hawkeye series could go. I think we could see Clint further struggling with the identity of Ronin and his relationship with Kate grow stronger until Yelena (Florence Pugh) appears and reveals to Kate that Clint was the Ronin, a brutal figure of violence. Reflectively, we could see Echo’s relationship with Fisk explored as a daughter and a tool for his use. Then, it might all converge when it’s revealed that Derek Bishop was working for Fisk all those years ago.

Showing Kate that her father was a flawed man who made mistakes but still managed to be loving and caring would reflect the same truth about Clint. Clint made mistakes and is paying for them, but can still be a good guy and a good father. Meanwhile, we could see Echo realize the truth about Fisk at some point (that he killed her father), and the realization that she is nothing but a tool to him, would likely drive her to the side of the main character of the show, setting up for her eventual series.

I’m excited to see how this show handles things like this. Ant-Man and Scott’s relationship with his daughter is the closest we’ve seen to a complicated parent relationship, but Marvel has always had a thing for heroes with daddy issues. Iron Man (notoriously), Spider-Man, Thor, Loki, Hulk if you count Thunderbolt as a daddy-in-law, and just so many others. Finally seeing it fleshed out in a 6-hour show could be great, and I’m excited to see how it’s done.

Also interesting to note the father & son-esque relationship that Jack (Tony Dalton) and Armand (Peter Callow) held when we saw them together, further pushing the exploration of that kind of relationship.

New episodes of Hawkeye release on Wednesday and Echo is reported to begin filming in April. In the meantime, let us know what you think of my theory. Reply in the comments or on social media!