‘The Umbrella Academy’ Season 3: Hotel Oblivion and Other Details Teased 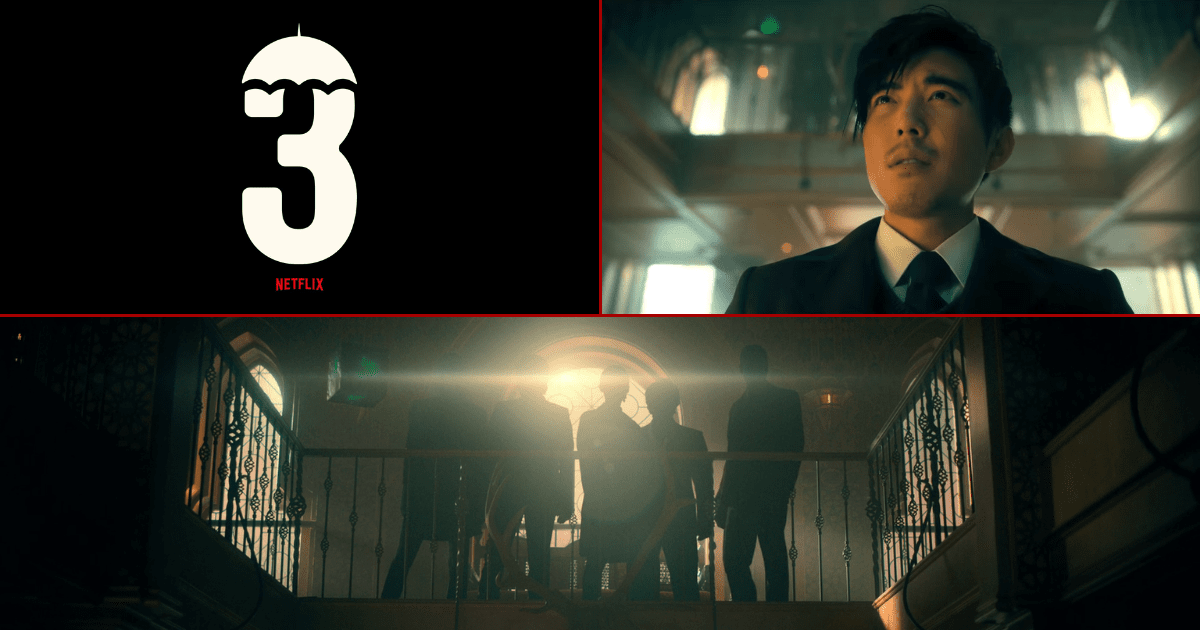 ‘The Umbrella Academy’ Season 3: Hotel Oblivion and Other Details Teased

Although last weekend Netflix had their inaugural and massive TUDUM festival to showcase clips and other featurettes from their catalog headliners, they curiously withheld any info or footage from The Umbrella Academy which has its third season set to premiere next year. Instead of any teaser or preview like those shown for Stranger Things or The Witcher, Netflix decided to ask some of the leads a few fun questions in a Q&A. But with today being the First of October, which also happens to be the birthdate for all the members of The Umbrella Academy we got a little birthday “gift”, see below:

We are the gift. Happy birthday to us! pic.twitter.com/rpdrcVaaDA

But today it has also been discovered that Netflix snuck in an announcement video directly on The Umbrella Academy page,  found under the “Trailers and More” subsection. The teaser is nothing more than an animation of an umbrella with sparrows that morphs into a familiar concierge bell that would be found on the front desk of most high-end hotels with a final “2022” title card. However, to those familiar with the comics, this announcement confirms the setting of the third season which will be in Hotel Oblivion.

Hotel Oblivion, an off-world prison facility run by Sir. Reginald Hargreeves in the comics, is also the title for the 3rd volume in the comic series that is still ongoing and with a  “Volume 4: Sparrow Academy” slated to release sometime this year. The takeaway here though is that in the comics, the name for this new locale is somewhere “no one could escape” according to creator Gerard Way. Looking back at some tweets, you can see some teasing about this from one of the series leads:

every beginning has an ending. hello oblivion.

Yet another tweet includes a cockroach which is what Dr. Terminal was fed during his time spent at Hotel Oblivion. Is this a hint towards a greater threat for a chance to have two sets of graduates to team up against? Something that would require a big ensemble? Here’s hoping for a tease at John Perseus X!

Fans of the show are still reeling from the season 2 finale stinger of Justin Min’s Ben not only revealed to be still alive but also leading an entirely new Academy. New cast members include Justin Cornwell, Britne Oldford, Genesis Rodriguez, Cazzie David, and Jake Epstein. In that chilling promotional clip posted today, we are shown that it is in fact the “Sparrow Academy Ben” that is addressing the audience, as our “Umbrella Academy Ben” said his goodbyes with a departing hug in the emotionally charged scene with Elliot Page’s Vanya.

Seems like ol’ Ben has fully sided with The Sparrow Academy now as he excuses himself from TUA and the promotional pieces being put out absolutely want us to know this in advance of any other previews. Adding to this, newcomer Genesis Rodriguez also posted a tweet in celebrating her fellow Sparrow graduates:

The back and forth between the two Academies on Twitter give us a little indication as to how the competing classes may treat one another. The Sparrow Academy being demonstrably cold and seemingly annoyed towards the “Brelly’s” as Justin put it. While we don’t know much about the plot, we did get a reveal a few months back that gave us the titles for all the episodes (pictured below) and we do know that showrunner Steve Blackman was involved with writing the first episode of the new season alongside Michelle Lovretta. 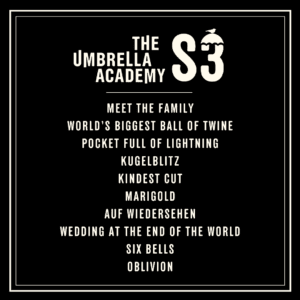 Collider also recently spoke with Luther/Number 1 played by Tom Hopper who had this to add:

“I think it’s a great setup for Season 3. I thought that the show really found a groove. I think what was so great about Season 2 is that we’d set up the world in Season 1, and I really feel that Season 1 was almost like a setup for the rest of the show. You’re not trying to figure out what this world is anymore, you know who these characters are, you know where they’re at in their lives. And, then we can really get things going. And I think towards the end of Season 2, you really start to just see what the show is, and it’s a great setup for what’s going to happen in [Season] 3.”

With the cliffhanger ending and the next season still a way away, the words from this leading cast member are reassuring that the team is working well in their pursuits of providing us with another good time with this family.

Last year Gerard Way sat down with Forbes in advance of the release of the first spin-off from The Umbrella Academy series, You Look Like Death. He took a moment to make a mention of Volume 4 saying:

“[It] deals with a very big reveal in the Umbrella Academy universe, something that had been secret for a long time, and our siblings learn a lot about what was happening behind the scenes, as well as discovering the true nature of some characters that have been with them since the beginning,” Way teased. “The series finally starts to answer the question: ‘What about the other babies born on that day, in that moment?’ The Umbrella Academy siblings are not alone in the world anymore.”

So while the details are very sparse, we have much to look forward to in the third season of Netflix’s hit comic book adaptation series. With the introduction of an ominous area, a new set of what could be either foes or friendlies, the return and elevation of fan-favorite Ben, and hopefully even more great music as we heard throughout the first two seasons. Look forward to The Umbrella Academy Season 3 when it releases sometime in 2022.