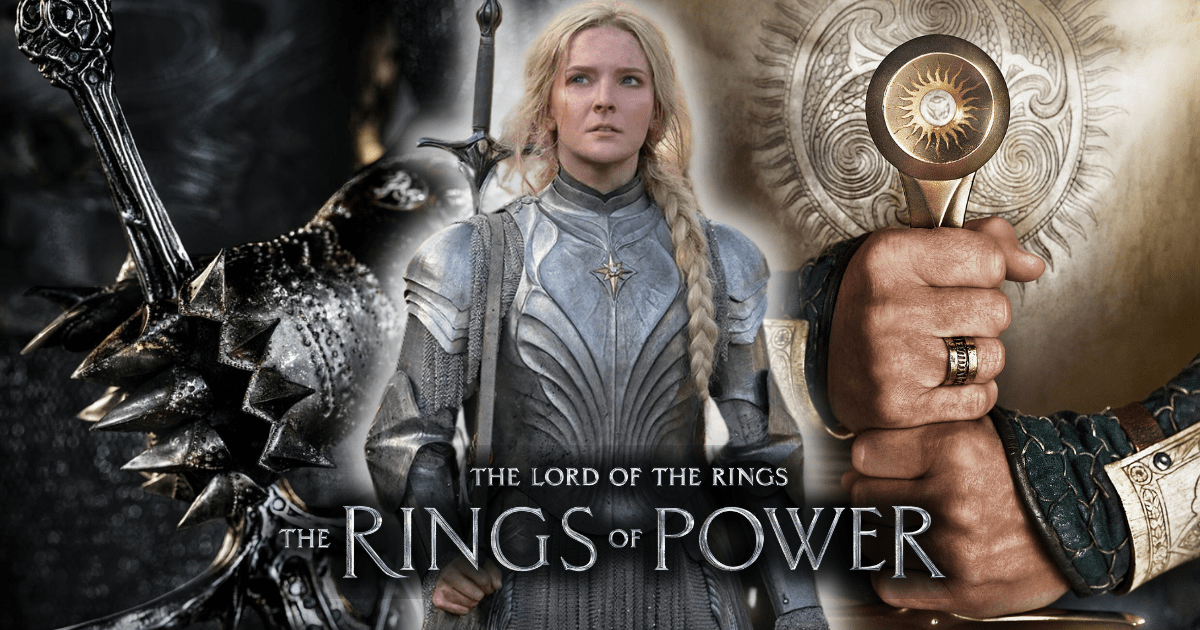 This past weekend fandoms around the world descended upon San Diego for four days of complete and total nerd takeover. SDCC is one of the biggest events of the year for Studios and fans, as all eyes are on the upcoming projects in film and television. Amazon Prime Video, not wanting to be left out of all the fun, was also present at this year’s SDCC, with a panel about everyone’s favorite accessory.

That’s right, The Lord of the Rings: The Rings of Power had its very own Hall H panel, with appearances from the cast, showrunners, and some first looks at the series. Moderated by a long-time fan of The Lord of the Rings Franchise, Stephen Colbert, those in attendance were truly in for a treat, as the exciting, magical world of J.R.R. Tolkien was brought to life right in front of their eyes once more.

[Warning: Spoilers from The Lord of the Rings: The Rings of Power SDCC panel are below!]

Opening the LoTR panel with music and Stephen Colbert

The panel began with a typical sizzle reel highlighting many of the exclusives on Amazon Prime Video, which ended with some new footage from The Rings of Power. After the sizzle reel was over, those in attendance were treated to something that I definitely wasn’t expecting, a full orchestra and choir played the musical score, led by composer Bear McCreary. What an epic way to start off a panel showcasing the newest project in Tolkien’s expansive world.

Stephen Colbert made his way onto the stage upon the orchestra and choir’s completion, providing anecdotes about his entry into LotR as well as a bit about the show. Not only did Colbert first read the original The Lord of the Rings when he was twelve, but he has read it over fifty times! Seems like he has earned the right to moderate this panel, talk about a superfan.

Footage rolled once again in Hall H from the series, before showrunners JD Payne and Patrick McKay, along with executive producer Lindsey Weber joined Colbert on stage.

Showrunners speak about The Rings of Power

While it may have been McKay and Payne’s first time to SDCC, they handled it like pros! Payne began by reciting a monologue in perfect Elvish, which Hall H seemed to find quite impressive. When asked what kind of story the duo was telling audiences with The Lord of the Rings: The Rings of Power, McKay, and Payne gave us our first juicy tidbit from the panel.

Payne: “Imagine everything is taken away from you. How far would you go to protect the things you love the most?”

McKay: “After a defeat and a respite, the Shadow grows again in a new form. And that’s what this story is about.”

Payne: “It’s the rise and the fall of Sauron. That story struck us as one that could match up with the grandeur we can give it.”

The duo went on to say that they wanted to find a huge Tolkienien multi-epic and that Amazon allowed them to make the show they wanted to. It sounds like the showrunners had extensive creative freedom for this show, which is exciting in many ways. As well, I love that they mentioned the show following the rise and fall of Sauron, the villain of the main LoTR trilogy. I think following Sauron’s dark journey could provide an incredible story, but also provide some humanity to such a scary force from Middle Earth.

Colbert asked the trio on stage about new characters appearing in the show that aren’t from the original text, to which Payne explained the process of incorporating them into the show. He indicated that they worked with Tolkien scholars, using the clues about different cultures in the Second Age that Tolkien himself provided in the text.

Using the hobbits as an example, he indicated that they pieced together the author’s notes to create characters within the established rules. Payne included that this isn’t a hobbit story, but a Harfoot story, an ancestor of the general hobbits we know from LotR. The showrunners and executive producers eventually left the stage allowing some of the stars to come out and speak about this incredible series.

Coming onto the stage to much applause were Robert Aramayo (Elrond), Benjamin Walker (Gil-galad), Charles Edwards (Celebrimbor), Peter Mullan (Durin), and Sophia Nomvete (Disa). Taking the first question, Edwards spoke on what impact Celebrimbor’s actions will have on the future of Middle-Earth. He says that the character is trying to recreate Valinor in Middle-Earth. He also indicates that his character is a prime example of what having no peace in your heart does to an individual.

A highlight from this section of the panel was Nomvete talking about being the first female Dwarf seen in a The Lord of the Rings film or series. She seemed incredibly excited to bring life to Dward Princess Disa and stated that she auditioned for the role when she was just days away from giving birth. She received the role when her child was just five days old

Zwangobani, who is playing the beforementioned Harfoot, stated that the group is a migratory tribe who have gone through a lot collectively. She said that they are still joyful and love life but hide away for protection. The other actors give generic descriptions of their characters, without giving away too much about the show or how they fit into it. There’s an air of mystery to the project as a whole.

The Final Q&A for The Lord of the Rings: The Rings of Power SDCC Panel

After all the rounds of actors came out to share tidbits about the series, the entire cast along with the showrunners returned to the stage once more to open the floor to questions. When asked about the biggest changes from the original trilogy of books and movies, showrunner Payne had this to say: “Well the show takes place four thousand years earlier, so there’s a lot of changes. In some ways, it’s meeting a very different Middle-Earth.”

Another audience member asked about what mythical creatures from LotR lore fans might see, to which a very noncommittal answer was given. Someone also pointed out that Galadriel in the footage we’ve seen is wearing an emblem from the wrong house, to which executive producer Weber indicated that though who are familiar with The Silmarillion would know. She said, “It’s not actually her armor, It’s a gift.”

While not too much information was given about the series or what we can expect from The Rings of Power, it does seem that something truly magical and epic is coming to Amazon Prime Video. I cannot wait for this series to drop on September second of this year. But what did you think of the panel? What are you most excited to see when The Lord of the Rings: the Rings of Power finally drops on Amazon’s Prime Video? Let us know on Twitter!