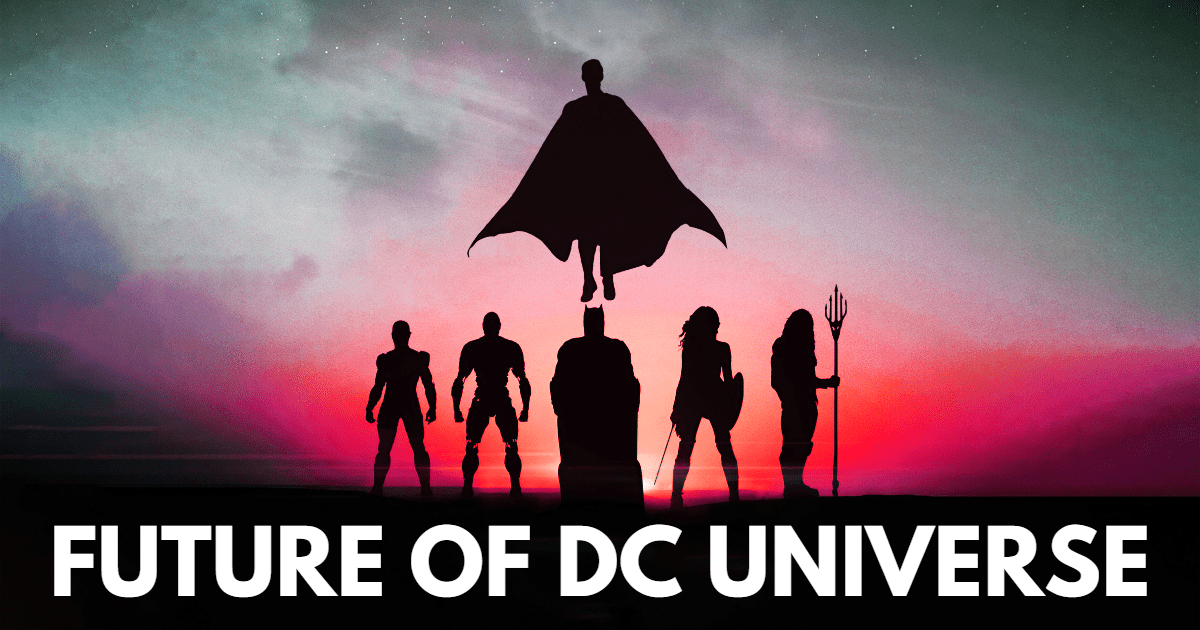 After Discovery officially bought Warner Bros. this past spring, David Zaslav wasted no time in making some controversial decisions. This included the cancellation of many projects that were deep in development or nearly completed, like the ill-received decision to not release DC’s Batgirl. Zaslav claimed to have a 10-year plan for their live-action DC media. So what kind of slate could we see in the next few years, and is it a better future for DC than we thought it could be?

In August 2022, Batgirl starring Leslie Grace, Brendan Fraser, J.K. Simmons, and Michael Keaton was unexpectedly canceled. Many people including the film’s directors Bilall Fallah & Adil El Arbi were shocked by the decision. The film was almost finished with only some post-production still required.

The decision left everyone unsure of what might come next, changing the status of all upcoming productions to seem much more uncertain. Batgirl was meant to be an important project for the Batman part of the DC Universe, and begin to assemble the second Bat Family in live-action productions.

Although audience reactions from closed screenings prior to the cancellation were positive, Zaslav said that it didn’t meet the DC standards and therefore canceled it. Unfortunately, we’ll never see this film, as it has been locked in the WBD vault.

In addition to Batgirl, other projects such as Naomi’s continuation, Wonder Twins, Zatanna, Constantine series, Madame X, and others have been canned in the process. Some of these productions were deep in development with a few casting actors in major roles. The cost of these projects seems to be a large factor, as David Zaslav wanted his productions to be as cheap as possible while maintaining good quality films/shows.

Changes in managing DC films and other projects

As we learned from the Discovery Meeting this August, David Zaslav wants to change management’s approach to creating new DC films and projects. Changes in how they promote and distribute them, and making them cheaper while still keeping up high quality. The main point for Zaslav about the cancellation of Batgirl was distribution straight to streaming. Looking at the production budget and the tax write-off ($15-20 million), it seems that distributing this film to theaters would’ve been a better decision.

The main goal for WB’s new owner was to find someone like Kevin Feige for DC studios. However, as of a few weeks ago, the heads of DC films, television, and animation are Peter Safran and James Gunn. They’ve been named co-CEOs, with Gunn running the creative side of the DC Studio, and Safran will focus on the financial side.

DC is expected to focus on the “big three” of DC, which consists of Batman, Superman, and Wonder Woman. Also mentioned during the Q2 earnings call, was DC’s 10-year plan, which is similar to Marvel Studios with three phases that led to Avengers: Endgame. This doesn’t mean that there’ll only be movies and series about the big three, but they’ll be the most important characters in the new DCU, while less important heroes and villains will be developed in other projects.

“As we look at the opportunities that we have broadly, DC is at the top of the list for us. You look at Batman, Superman, Wonder Woman, and Aquaman, these are brands that are known everywhere in the world and the ability to drive those all over the world with great stories is a big opportunity for us. We have done a reset. We’ve restructured the business where we’re going to focus. There will be a team with a ten-year plan focusing just on DC. It’s very similar to the structure that Alan Horn and Bob Iger put together very effectively with Kevin Feige at Disney.” – David Zaslav (via The Direct)

Before Zack Snyder left his Justice League project for personal reasons, the DCEU was expected to focus on separate character stories from the team. We were supposed to get Batman movies, with Ben Affleck set to appear as Bruce Wayne and direct them, and Man of Steel 2 from Zack Snyder. When the project was abandoned and handed over to Joss Whedon to finish it, the original vision was abandoned for some time.

Let’s start with the pillars of the DCU, which are our aforementioned big three. While we never thought Cavill would return to the role of Superman, all reports suggested that Zaslav wants Cavill’s Superman to be one of the leads of the DCU. The Rock was the one to convince him to agree to appear in Black Adam, pushing those at WBD to make it happen.

Henry Cavill himself has since confirmed his return to the DCU on his personal Instagram. While he didn’t get into specifics about what Superman’s future in the DCU looks like, he did say that it looks bright and more information will come soon. Many believe that this future involves a sequel to Man of Steel.

There’s also another possibility that could ensure Cavill’s return sooner, as Superman’s cousin Supergirl (Sasha Calle) is introduced in the upcoming The Flash, which could be the starting point for seeing the two together on the big screen. With Cavill’s departure from Netflix’s The Witcher, we can safely say that it’s only a matter of time before we get official confirmation regarding his possible contract and future film announcements.

In regards to Batman, it’s more difficult, because as we know Robert Pattinson isn’t the Batman of the DCU. But which Batman is the DCU’s Batman then?

At this point, as far as we know, there are a few possibilities:

The first possibility is that Ben Affleck remains as the main Batman in the DCU. After his return to the DCU in The Flash he could remain as the main actor for the character there.

The next possibility is that Michael Keaton, who’ll reprise his role in The Flash after 30 years, could replace Ben Affleck as the main Batman. This could also work by keeping Keaton as the main Bruce Wayne/Batman in the universe while having Affleck’s incarnation on another Earth.

Lastly, they could keep both Batmen on the same Earth, where Ben Affleck would be playing Batman, while Keaton would be someone like Nick Fury from that universe and act more like a version of the character from Batman Beyond. That would give us both Batman and Bruce Wayne without fans arguing who would be better as the main vigilante in the DCU.

What we do know about Wonder Woman is that Gal Gadot is set to return as the Amazonian warrior in Wonder Woman 3. The third film will be directed again by Patty Jenkins. THR reported recently that a script by Patty Jenkins is expected “imminently.” With the return of Diana Prince, we can also expect the debut live-action appearances of her famous comic book villains, there were even rumors that Cheetah (Kristen Wiig) might return in the third movie that’ll be set in the present.

Other future DC films and series

Other DC films are also planned to introduce new heroes and villains, with projects such as Blue Beetle and sequels to Shazam and Aquaman. At this point, these projects seem to be safe and will be released in 2023. Below you can find more about some other announced productions for DC.

Starring Joaquin Phoenix and Lady Gaga, Joker’s sequel is one of the non-DCU projects still in development. It’ll be a musical sequel to 2019’s Joker, placed inside Arkham Asylum. Many popular actors like Brendan Gleeson, Catherine Keener, Harry Lawtey, and Jacob Lofland also joined the cast. No more information is available at this time.

The sequel to The Batman from Matt Reeves is also a highly anticipated production from DC Studios. Matt Reeves is planning more films and series from his Batverse, which should make every Batman fan happy.

The Flash is directed by Andy Muschietti, due to be released in 2023. The current allegations against Ezra Miller are very serious, and it certainly seems it’s time to recast the role of Barry Allen. There have been rumors that the candidates to replace Miller are Sam Claflin, George MacKay, and fan favorite Grant Gustin. The film will adapt the Flashpoint story but will change many things, so the plot would have a few more surprises in store.

The next season of Peacemaker or the expected Amanda Waller (Viola Davis) series will likely tell the story of Amanda Waller’s formation of the next Suicide Squad to manage the events of Peacemaker’s season one finale. We recently learned that James Gunn isn’t done with films in the DC Universe and is attached to a secret project. What that project is, isn’t yet known.

At first, the series was supposed to introduce us to the beloved Green Lanterns of the DC universe without necessarily showing us Hal Jordan and John Stewart. Now the entire script has been scrapped, and the idea is to tell a story about John Stewart. We don’t know who’ll play him, but there’s a possibility that Wayne T. Carr, who didn’t have the opportunity to appear in Zack Snyder’s Justice League, could officially debut in the series.

Another John Constantine movie starring Keanu Reeves, is an example of a revival of a project from the “old era” of DC, where they did productions unrelated to each other. This might be a great idea in the long run to bring back beloved characters and the actors who played them. Reuniting with Reeves for the sequel is the original’s director Francis Lawrence.

There have also been rumors that Joe Manganiello might return as Deathstroke, which was underutilized in Justice League. At one time, it was thought that Ben Affleck’s solo Batman film may be where the two characters would have an epic showdown. We’ve also got some information about DC creating games that were supposed to be somehow connected to the main DCU as well as be separate titles.

The future of DC looks very good and all those announcements sound amazing even to people who aren’t comics geeks. But in order to create this 10-year plan, and have it function properly, Zaslav needs to take baby steps now so that won’t hurt subsequent projects and public opinions.

We can expect that Phase 1 has already started since Dwayne “The Rock” Johnson revealed as much on his Twitter last month.

This means a lot, thank you so much. #BlackAdam will serve as our phase 1 of storytelling in our DC Universe. Exciting times for the brand to build up and build out

What do you think about the possible future of DCU? Excited about what’s to come? Let us know on Twitter or our Discord. And if you haven’t already, check out my article about Henry Cavill’s return as Superman!