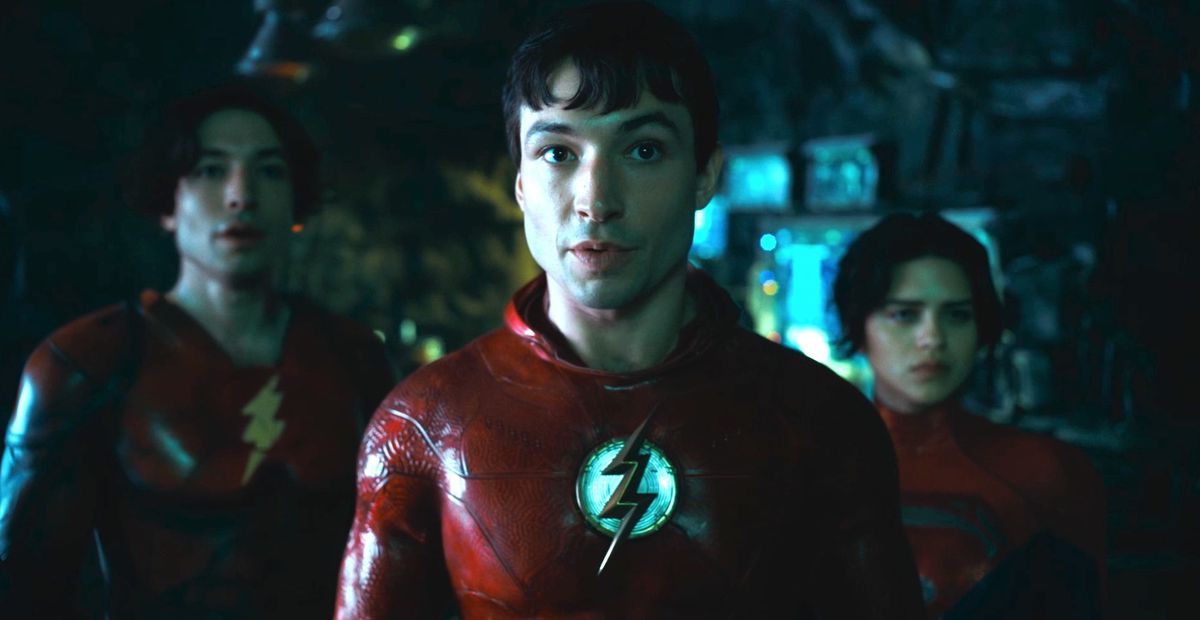 With this year’s DC Fandome we finally got some footage for the upcoming film The Flash. Not only does the footage confirm that Michael Keaton is going to be returning as Batman via some voiceover dialogue, but there are plenty of tidbits for the fans to get excited about and get the theory wheels in their heads turning.

As far as where my brain went, it was quickly busy expanding on some intriguing but previously known information. Just a couple of months ago, at the beginning of August, we reported on an exclusive coming from The Direct that suggested the villain of The Flash would be an “evil Barry Allen.” I was trying to keep that in mind while watching the footage, and now I think I’ve put together quite an interesting theory for you here.

When writing about the report in August, it seems this was expected to be a secret kept until the film’s debut. We only knew that there would be more than one Barry Allen (both played by Ezra Miller) because of some sneaky set photos, so opening the trailer with two Barry Allens was a little bit of a shock for me.

At the time, I made some assumptions about how they would address an “evil Barry Allen.” There was a similar storyline in season 3 of CW’s The Flash show and I thought maybe they would lean towards something like that. However, that show benefited from an entire season of set-up and it would probably be hard to execute within the runtime of a single film. In addition, seeing the two stand side by side and (seemingly) working together has kind of thrown the “straight-up evil Barry Allen” theory in the trash, with maybe one exception…

There has been a time in the comics where Eobard Thawne (aka Reverse Flash) altered his appearance so that he could look like Barry Allen. I don’t think that could necessarily be ruled out as a possibility, but I really think that would be a far more boring alternative to my current working theory about the film.

What if the antagonist really IS just another Barry Allen, but one that isn’t explicitly evil?

So here’s the set-up: just like in Flashpoint, the story can start with some fun slice of life mission that leaves Barry a little nostalgic and reminiscing about his mother. In the following scene, Barry realizes that with his powers, he could just go back in time to save his mother’s life, and he does just exactly that. After returning to the future, our Barry finds a new Barry Allen (who I’ll call “BA” for the sake of distinction) who grew up his entire life with a very alive mother. That is who I think could be the antagonist of the film.

Upon saving his mom and returning to the future, he’s really just traveled to an alternate universe where his mom didn’t die, meaning BA is there too. Over the course of the film, Barry, BA, Supergirl, and Batman (or Batmen, maybe) realize that Barry traveling to this new universe is not good and is causing instability. After trial and error over the course of the film, they also realize that the only way for Barry to return to his universe is to let his mother die.

It would eventually lead to a very intensely emotional scene, one that was explored in CW’s The Flash, where Barry also has to let his mother die. But, consider how BA, who lived with his mother his entire life, might take that information: probably not very well. On top of BA knowing that his mother will have to die, there is also the chance that letting Nora die will close the entire universe that BA lives in.

Now we have BA fighting for not only his mother’s life but possibly his entire universe’s existence. It could potentially lead to a very interesting and complex moral conversation with two versions of Barry on-screen to verbalize their points to each other, which is something that other versions of Flashpoint missed out on. Usually, in cartoons and comics, it’s easier to portray a complex internal conflict, but I think here it would be a lot easier to just have two versions of Barry actually argue with each other and you can really get across the two sides of the argument.

Having an entire movie layout the emotional conflict that comes with approaching an ethical question with this kind of intensity would be really cool, especially in the comic book genre. I’d certainly be more interested in that than just a straight-up adaptation of the Flashpoint comic. If this theory ends up being true, this could be more Flash focused than anyone expected.

Obviously, this wouldn’t be something easy to play with or write about, but if anyone can do it, it’d be Christina Hodson. She’s a project or two away from me buying her a DC Comics crown myself.

Check out the DC Fandome teaser for The Flash down below.