‘The Boys’ Season 3 Premiere Spoiler Review: Stronger Than Ever 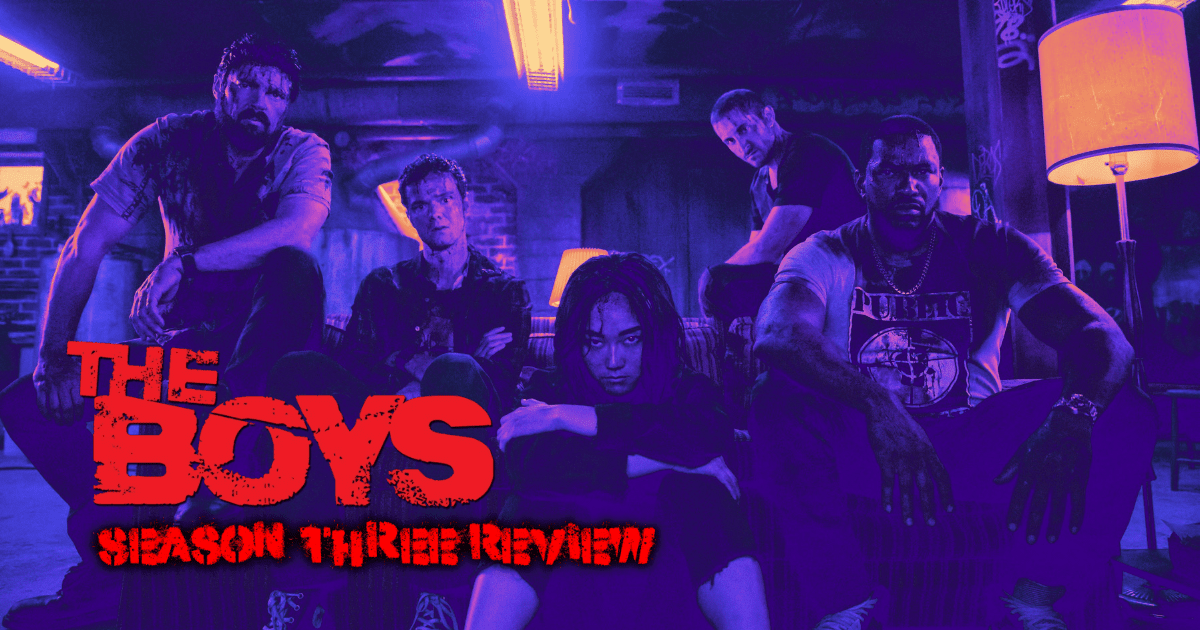 ‘The Boys’ Season 3 Premiere Spoiler Review: Stronger Than Ever

Within 10 minutes of pressing play on “Payback,” season 3 of  The Boys lets you know just how absolutely insane things are really going to get. If you want to go in spoiler-free, come back to this review later, otherwise, read on for my thoughts on the newest season’s first 3 episodes.

[Spoiler warning for the first 3 episodes of The Boys season 3, now available on Prime Video.]

Twists and surprises kick off The Boys Season 3

The season opener “Payback,” followed by “The Man In The Sky,” presents a very nice change of pace for the series. We catch up with all the usual suspects at new and different points in their lives. It really keeps things fresh and exciting. There are also a couple of twists and shocking surprises right from the start which I will let you view for yourself rather than spoil here.

Butcher, Frenchie, and Kimiko (Karen Fukuhara) now actually operate as agents of the government with the help of Hughie (Jack Quaid). Mother’s Milk is living the domestic co-parent life, desperately trying to keep his head on straight for the sake of his daughter.

Meanwhile, Starlight (Erin Moriarty) is soon promoted to co-captain of the Seven alongside Homelander, bringing a lot of mixed feelings and danger signs with it. Of course, like always, Antony Starr’s Homelander is losing his mind more and more every second, and as terrifying as ever.

If I had one complaint about these first 2 episodes it would be that I never bought into the lie they presented. These fresh takes on these characters were never going to last, and they didn’t try very hard to convince me they would.

Just as expected, things slowly begin to unravel and by the end of the second episode we’ve arrived right back at the typical status quo; Butcher (Karl Urban) is leading The Boys in the fight against supes and Starlight is undercover in the Seven.

It was a smart idea to take things the direction they did though because hopping back into the season with business as usual might have felt a little exhausting and repetitive. At least they gave us a little something to chew on before diving head first into the madness.

The broad narrative they’ve presented thus far this season is really strong. The Boys have got a lead on something that might be able to kill Homelander (Anthony Starr). They’ve got to do whatever they can to track it down, including talking to heroes in the past and now maybe arranging a meeting with some Russians.

The constantly arising concern that Homelander might explode and take a lot of casualties with him at any second contrasted with the Boys hunting down a weapon they hope can kill him once and for all, is great. In addition, the tension felt across the episodes is really poignant and there is a sense of urgency that increases with each episode.

While the wider scope of the narrative is great, there have been a couple of storylines that were lacking. The little side plot in episode 3 for Frenchie (Tomer Capone) was weird and came out of nowhere.

An old friend of Frenchie’s is on the run from a Russian gangster named Little Nina. He helps her escape Nina’s wrath, and then Nina comes knocking to ask him if he knows anything about her whereabouts.

The storyline appears to be nothing else but a very thin way to connect The Boys with the Russians so that they can get their hands on the weapon. The only good thing I can say about this subplot is that it takes up a very little amount of screen time.

Another thing they’ve been hinting at is a potential love triangle between Hughie, Starlight, and Supersonic (Miles Gaston Villanueva). They played it up in episodes 1 and 2 as a joke and something that would linger in Hughie’s mind as things begin to crumble on top of him. This is just another thing to stick in his brain while he’s beaten down.

The end of episode 3, “Barbary Coast,” introduces Supersonic as the newest member of the Seven just as pressures are continuing to rise inside the Seven. Starlight (Erin Moriarty) feels more in danger than ever, so it really feels like they are setting Supersonic up to be her number 1 guy in the coming episodes.

Now, here’s the issue with that: I don’t really care. When the stakes are as large as they are, I find it hard to stress about the squabbles of a love life.

Homelander lays out beat by beat how he would slowly destroy the world if he really wanted to, and then they try to tee up a story with melodrama like that. I’m really hoping they change direction on this story or just do a better job making me care. As of right now, I’m just kind of dreading this part of the story in future episodes.

But for every lackluster story arc they’ve had, they’ve had an equally fantastic story to match.

Mother’s Milk’s arc covered in just the first two episodes is one of the most touching in the series to date. M.M. (Laz Alonso) struggles with his mental health all while trying his best to be a good father, and the recent connection to Soldier Boy (Jensen Ackles) has kicked up some dust from his past. He’s holding together as well as he can but it’s just not enough.

It all culminates in him breaking down in front of his daughter, and he worries that it might be enough to push her away… but then she just gives him a hug and comforts him. It’s by far the most sincere and loving moment in the entire series yet.

And that’s the benefit of turning the violence and insanity up to 11. They’ve done a great job showing just how high the stakes are, and it makes these quieter moments matter that much more.

Something like a love triangle comes off as superficial, but the love for his daughter that MM holds and the moment she reciprocates that care is enough to make anyone tear up a little bit. After trudging through the rough and cynical moments of the series, it feels really rewarding, almost like experiencing a nice warm hug yourself.

These first 3 episodes of The Boys have been really great. As far as quality goes, it’s exactly what audiences have come to expect from the previous seasons. It continues to be incredibly consistent.

There may be the occasional bumpy storyline, but I’ve never left the show feeling dissatisfied. It’s still funny, it’s still violent, it’s still shocking, and it’s still maintaining that warm lovable heart at its center that makes it all worth it.

🔥See you TODAY! #TheBoys is FINALLY available to watch. Thank you so much for your patience. It literally means the world to us. No GO GO GO!!!!! @TheBoysTV #TheBoysTV pic.twitter.com/YCjP0NQafJ