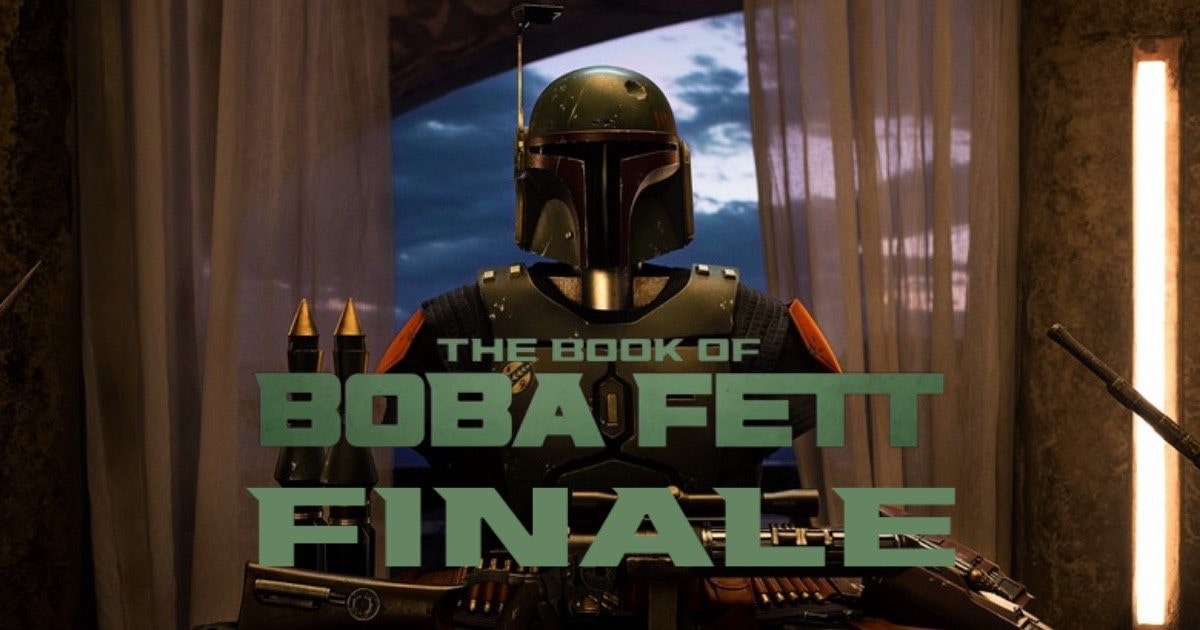 The season finale of The Book of Boba Fett is here, and it was not what I expected: but in a good way. I was very skeptical about how they would wrap the Disney+ show up. There were times it felt all over the place with long flashbacks, multiple cameos, and plenty of attention on Pedro Pascal’s Mandalorian throughout the last three episodes.

It did feel a little long at some points, and I was constantly asking myself where certain characters were throughout the episode. But in the long run, it seems that The Book of Boba Fett should be looked at as part of the Mandalorian’s story… although I can’t imagine how a second season would work. For now, let’s focus on all the cool action that happened as I give my review of the finale!

[Spoiler Warning for The Book of Boba Fett Season 1 finale below!]

Something that really stuck out to me was the way Boba Fett and Mando fought together. There were times they were so in sync that it was like they had been fighting together for decades. I loved that we finally got to see some jetpack action too since they have rarely been used.

I was so relieved when the people of Freetown came to fight during the final battle. I knew they were coming, but I think Cobb Vanth getting shot had to do with their motivation. I have to say, Peli showing up mid-fight by accident was probably one of my favorite moments. I’m glad she was the one who brought Grogu back to the Mandalorian since she has so much love for the two of them. Their reunion was emotional and I was so excited to see Grogu wearing his new armor.

I had completely forgotten about the Rancor until Boba came back to the final fight riding on it. When the Rancor was given to him by the Hutt twins, I immediately thought of The Bad Batch and how Omega (Boba’s sister) was so kind and caring towards the Rancor they saved in episode 5. I’ve been noticing similarities between Boba and Omega, both empathetic and immensely loyal.

From what little we have seen of Boba before this show, he was influenced by the people around him (e.g. Cad Bane & Aurra Sing) after his father died, but the series showed Boba as his own person. While I’m glad they took the time to work on Boba’s character, I just wish we saw more of Temuera Morrison as Boba in his own show. I’m hopeful that Omega and Boba will meet one day to see how their dynamic would play out.

Boba and Cad Bane’s final fight feels like it gave closure to Clone Wars fans since the two were absent from the animated show’s final season. In a deleted Clone Wars scene, there is a fight between the two where Boba kills Cad Bane. It shows how Boba got the dent in his helmet, which still remains a mystery in The Book of Boba Fett.

When it came to the final fight, Boba used the skills provided by the Tusken Raiders with the gaffi stick. I thought it was very fitting that Boba killed Cad Bane as it felt like one last part of his past has been taken care of.

Since her first appearance in The Mandalorian, it’s clear that Fennec Shand is a really cool interesting character, and perhaps even one with the potential to headline a series of her own. But she seemed pushed aside after having a bigger role set up for her at the beginning of The Book of Boba Fett.

When a Star Wars show or movie ends, we’re usually left feeling sad and uncertain about what’s next. This time, it was hopeful and exciting. They definitely did a good job setting up for the next season of The Mandalorian and I’m curious as to what’s next for our favorite space father-son duo.

What did you think of The Book of Boba Fett finale? Was there not enough time spent on Boba and Fennec? Too many cameos? Let us know in the comments or on Twitter @mycosmiccircus!