After 15 years of great comics and a breakout role on the Young Justice animated series, Jaime Reyes’ fan-favorite Blue Beetle is finally being brought to life for a theatrical release next summer by director Angel Manuel Soto. Production started almost two months ago in Puerto Rico and is currently continuing in Atlanta, from where our first set images have just surfaced online. Not only do these show the atmosphere of the movie, but also our first look at Xolo Maridueña in the Blue Beetle suit!

We have the first photos of Xolo Maridueña in costume as Blue Beetle for his upcoming DC Comics movie! https://t.co/2XiAIPLcUb

As you can see below, the suit is excitingly comic accurate and completely practical! We expect Jaime’s iconic pincers to be added in post-production.

Late Sunday, Redditor amish_novelty shared this image from Blue Beetle filming in Atlanta that day, featuring a bus cleanly cut in half.

Who is Jaime Reyes / Blue Beetle?

Being the third Blue Beetle in the comics, Jaime Reyes is often compared to young legacy characters like Miles Morales, but his unique alien tech suit also gives him elements of Cyborg and Venom. Like Venom, the sentient alien technology talks to him and sometimes even takes control without his permission!

Jaime is a Latino-American kid from El Paso. Because of his background, Jaime is rooted in layers of legacy, both in terms of literally carrying on the Blue Beetle mantle and also the legacy of carrying on his family’s heritage as a second-gen immigrant in America.

Although he’s often seen joking around, Jaime is also grounded by family responsibilities and his aspirations for his future. In one famous panel from his original run, a villain turns Jaime into his deepest fantasy, which is a dentist, because of the financial stability. What about the other Blue Beetle, Ted Kord?

The previous Blue Beetle, Ted Kord, is a major part of Jaime’s character. Although Kord was originally dead when Jaime suited up in 2006, this was retconned in 2016’s DC Universe: Rebirth relaunch so that Ted could be a proper mentor figure to Jaime.

While Jaime is a proper superhero with his enhanced technology, Ted is a typical billionaire hero with gadgets, basically a lighthearted Batman with dad jokes.

While we don’t yet have official confirmation of Ted Kord being in the movie, we have reported some interesting developments on that front recently. In addition, we can confirm that Kord Industries will have a major role in the movie, as teased in their initial concept art from 2019.

However, it remains to be seen what connection Jaime and Kord Industries will have with the movie’s Victoria Kord (played by Susan Sarandon), who seems to be an original villain for the film without any comics counterpart. 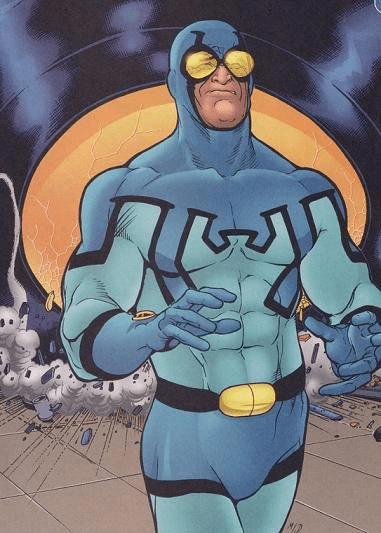 Have you already read any Blue Beetle comics? Are you up to speed on Young Justice? Let us know how excited you are for the Blue Beetle movie @MyCosmicCircus and stay tuned to the site for more info coming soon!

In the meantime, brush up on your knowledge with our brand-new Blue Beetle Reading Guide!