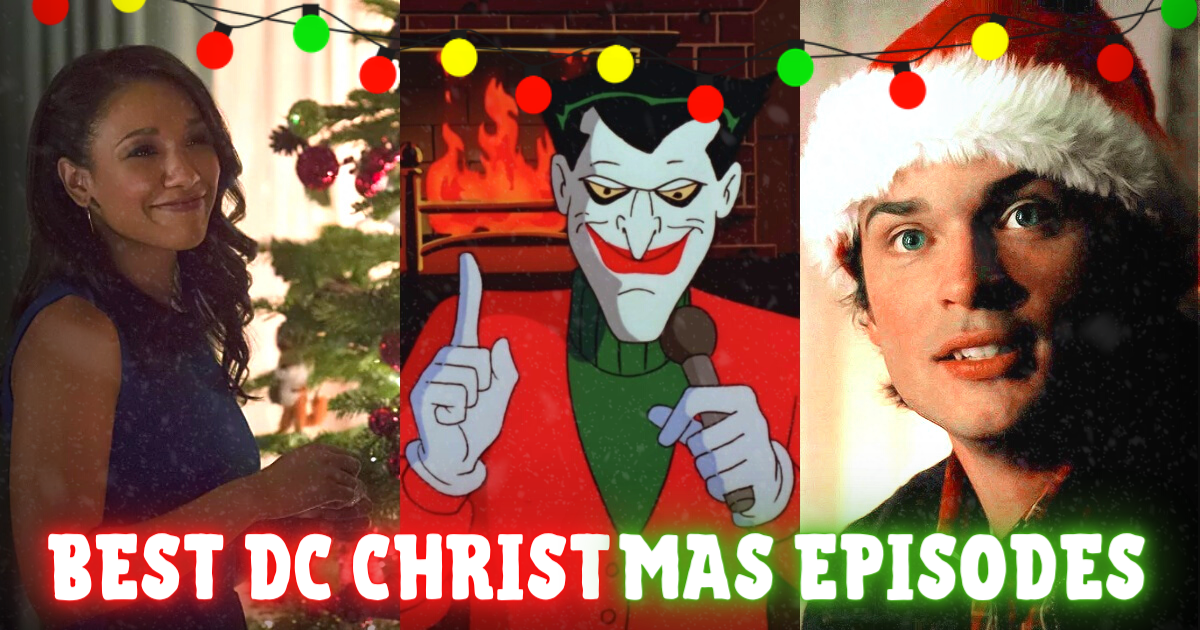 When it comes to Christmas episodes, there are too many to count. But if you’re looking for some Christmas cheer from the DC Universe, don’t worry because I’ve got you. Below you’ll find six episodes from both animated and live-action DC series that are definitely worth watching this Christmas season. For a complete list of DC Christmas episodes, check out our Holiday Specials guide!

[Spoiler warning for some of these episodes below!]

Batman: The Brave and the Bold “Invasion of the Secret Santas!” (S1, Ep5)

“Invasion of the Secret Santas!” is undoubtedly one of the greatest and saddest episodes of Batman: Brave and the Bold. In it, Red Tornado disguises himself as a college archaeology professor, that leaves teaching when there’s a need to rescue children in danger.

The episode is focused on Christmas, but Tornado doesn’t know what the holiday is. He decorates his home with gifts and decorations, trying his best to feel the Christmas spirit. Unfortunately, he feels nothing. Tornado joins forces with Batman to save the city from flying saucers, and after that, they talk about the Christmas Spirit and the true meaning of the holiday.

Batman reminisces about his deceased parents and how he misses them. Then they fight deadly Santa robots created by Fun Haus, and Tornado saves everyone by exploding near the giant robot. While doing this he had a very strange feeling for one small second.

At the end of the episode, we see Tornado being repaired and he tells Batman that it felt great to feel something like the Christmas spirit. The episode closes with a scene of Batman sitting in the Batmobile with an old toy soldier his father gave him.

“Lexmas” is a very special episode of Smallville, because the story is inspired by classic Christmas books/films. The episode begins with the classic “Somebody Save Me” intro and with Lex (Michael Rosenbaum) trying to decide which moral path he’ll take in the race for State Senator against Jonathan Kent (John Schneider).

Returning to his car, Lex is mugged, shot, and left for dead. That’s when the typical Christmas trope occurs with Lex waking up in his bed and remembering nothing of the accident. Next to him lies a pregnant Lana Lang (Kristin Kreuk). His late mother reappears, telling Lex this is the life he’ll have if he makes the right decision, becoming truly happy.

Meanwhile, on the Kent farm, Clark (Tom Welling), Jonathan, and Martha (Annette O’Toole) prepare for Christmas. The episode switches between Clark’s and Lex’s perspectives, showing what their holiday looks like (Lex, of course, is still unconscious). Clark tries to save the life of a man dressed as Santa Claus who wants to kill himself. Lex meets his good self in the “alternate reality,” and we learn how the two, though different, still believe in the Christmas spirit.

This Smallville episode like other Christmas episodes from the DC universe is very emotional and shows that the most important thing about Christmas is spending time with the people who matter most.

Batman: The Animated Series “Christmas with the Joker” (S1, Ep2)

This is probably one of the most popular and remembered episodes of Batman: The Animated Series. This episode is about the Joker’s escape from Arkham Asylum on Christmas Eve. While Batman and Robin attempt to have a normal Christmas dinner, every time they go to eat and bond in a more father-son way while watching It’s a Wonderful Life, they have to chase the Joker.

There are sad moments, as Bruce tries to be the father Dick needs on Christmas Eve. He knows he’ll never match Dick’s father, but he tries anyway, and we as viewers are certainly rooting for him to achieve his goal.

The Joker causes plenty of chaos for our Dynamic Duo, and this time he isn’t working alone. Our heroes have to fight giant nutcracker robots and flying toy planes. Finally, the Joker is defeated, landing in a cell laughing hysterically while singing the Merry Christmas song, and the Dynamic Duo finally gets to watch their long-awaited movie.

The Arrowverse crossover episodes and those with a Christmas theme are among those that are most beloved in this franchise. This one focuses on Barry (Grant Gustin) and Reverse-Flash (Tom Cavanagh) meeting face-to-face for the first time and fighting.

The episode is full of holiday cheer. There’s lots of talk about Christmas, giving each other gifts, decorating the tree, drinking eggnog, and listening to Christmas tunes. All in all, the episode is chock full of Christmas spirit.

Watching it, you can feel Barry’s pain, he misses his mother and can’t spend the holiday with his father. There is the typical story and dialogue expected from Christmas projects. But this works really well here without being so tiresome and obvious. The last scene with the iconic Merry Christmas quote perfectly sums up the whole episode.

“Comfort and Joy” is perhaps one of the most emotional episodes of the animated series. It begins with the Justice League stopping a threat to destroy another planet. All members are excited for Christmas except Martian Manhunter and Hawkgirl, both of who don’t know what it is.

The episode is split to show how different heroes spend the holiday season. Although Batman and Wonder Woman don’t appear in the episode, Superman mentions that it’s because they spend Christmas in their own way.

Flash visits the Central City orphanage as he always does every year to spend time with the children and get them gifts. He travels all the way to Japan to get the last toy, just to make them happy.

During a fight with Ultra-Humanite, the gorilla destroys the toy. Touched by Flash’s dedication to children, decides to give up and fix it. Green Lantern and Hawkgirl decide to have fun in the snow, get drunk on an alien planet, and have a bar fight there, so you know, another normal Christmas tradition.

Finally, we get a glimpse of Martian Manhunter spending the holidays with the help of Superman, who insisted on J’onn joining him and his family. Being an alien in the home of normal people when he doesn’t know what will happen during the holidays makes him feel uncomfortable. After spending the night and learning about the Christmas culture, J’onn transforms back into his Martian form and sings his native traditional song.

“Running to Stand Still” serves as the most Christmas episode in the entire Arrowverse. In it, The Flash fights Weather Wizard (Liam McIntyre) and The Trickster (Mark Hamill) in order to save Central City during the holidays.

As in the previous Christmas episode, we get to see Team Flash give each other gifts, drink egg nog, and have the perfect Christmas evening. “Jay” (Teddy Sears) pokes fun that he’s from another Earth and there’s nothing like Christmas there. While this may be completely true, I wonder what exactly it would look like with Caitlin (Danielle Panabaker) explaining step by step what it is.

Captain Cold (Wentworth Miller) visits Barry and plays Santa Claus by giving him the gift of knowing what the villains want. He also passes on the opportunity to fight Barry.

Mark Hamill had a lot of fun during this episode, as his version of the Trickster was a sadistic psychopath with sometimes childish behavior. Christmas time was perfect for him to put bombs in wrapped presents, make candy canes full of acid and play Santa Claus while giving these gifts to children.

Without spoiling too much, there are a lot of pop culture references to other classic productions. These are meant to be funny scenes or just to give a holiday vibe – something which the episodes in the Arrowverse do very well.

But what are some of your favorite DC Christmas episodes? What are you watching to get in the mood for Christmas this year? Let us know on Twitter or the Cosmic Circus Discord!

Plus, don’t forget to check out the Holiday Specials guide for the ULTIMATE list of Marvel/DC holiday comics and TV episodes. And if you haven’t already, check out our picks for the top five holiday episodes of Doctor Who! 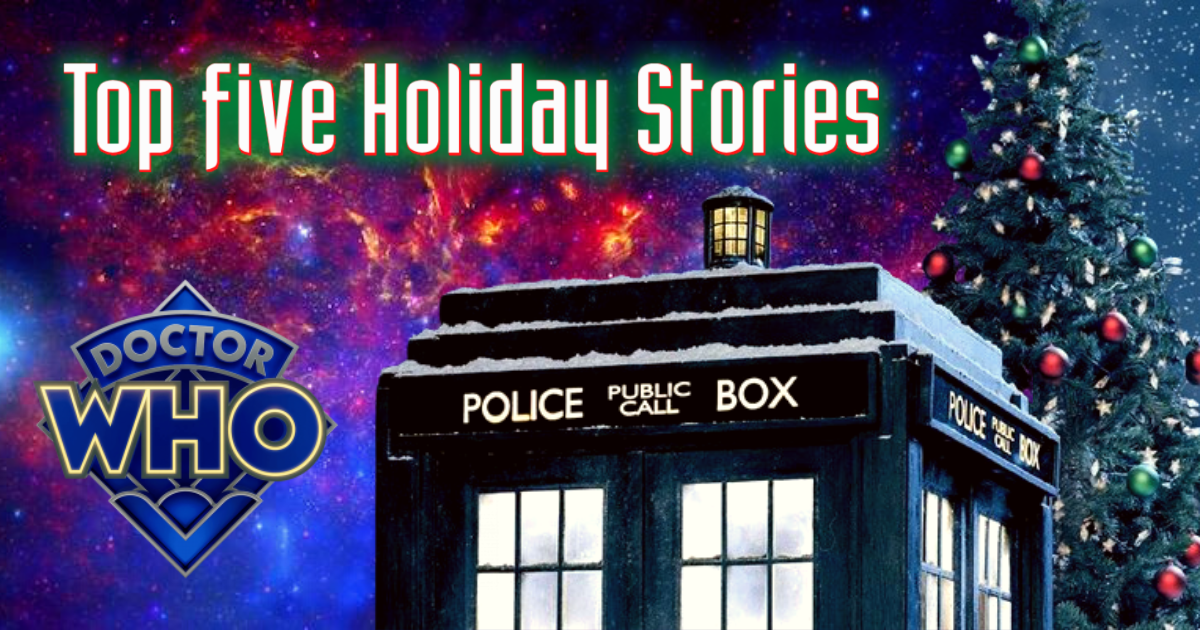