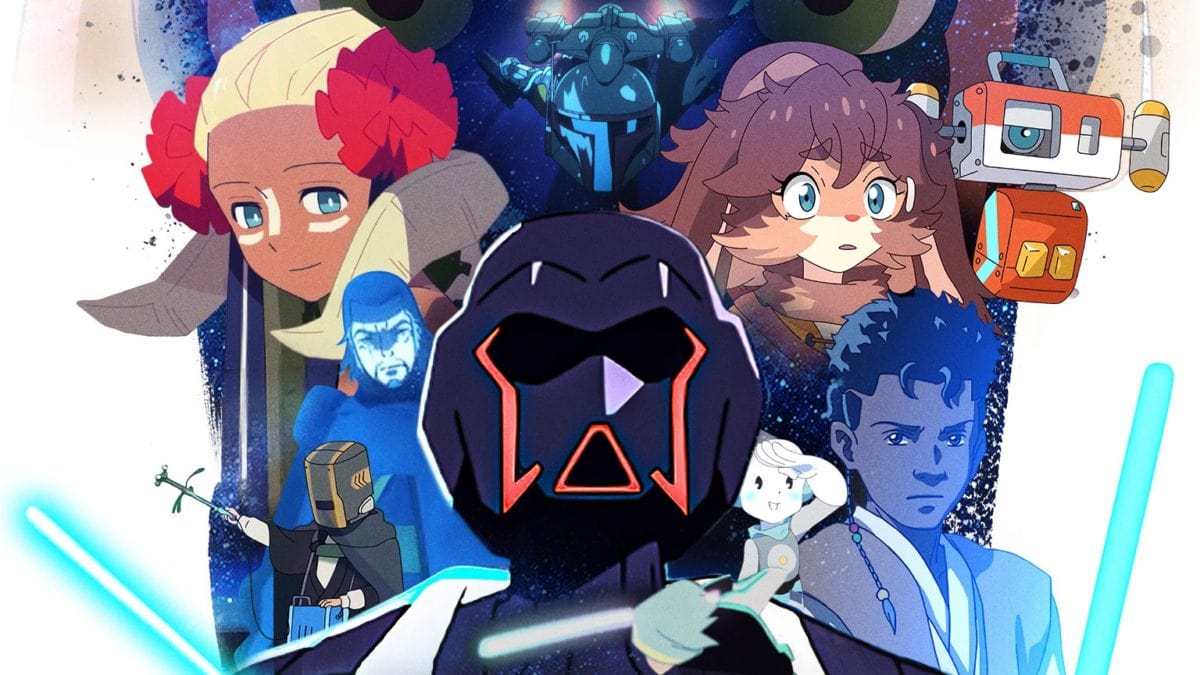 Star Wars: Visions is finally out and a couple of my friends, as well as myself, here at The Cosmic Circus decided to divvy up the workload. Alex and Vin were both really excited to cover certain studios and certain episodes, so I decided to just take whatever episodes were left over. Frankly, I was so excited to watch and write about this show, that I didn’t care which episodes were left to cover.

If you’re excited for Star Wars: Visions as well, be sure to be on the lookout for Alex and Vin’s articles that will cover the other episodes in the next few days. Otherwise, buckle up, because this show is pretty great.

Watch out for spoilers for Star Wars: Visions below!

I was going to attempt to go into these episodes completely blind, hoping it would make the experience better. I guess we’ll never know though because as soon as I got a whiff online that this episode was about a space band performing at the pod racing arena, I couldn’t help myself but read the official synopsis. I couldn’t believe my eyes. Now, finally watching it, it was exactly what I’d hoped for.

The entire episode is essentially 10 minutes of explaining the circumstances with which this band of people has been brought to play at the pod racing arena, formally called the “Mos Espa Grand Arena.” At the end of the day, the important thing is the story of friendship, and care, and the power of music. But if I’m being honest, I might have just preferred a 20-minute concert performed by the band. Either way, it was definitely a good time.

In the grand scheme, and having seen the two other episodes that I have, this one is very light and fun. It’s got a ton of heart, it’s got a lot of love, and it’s got a catchy song. What more is there to ask for?

Studio Colorido is one that I’m unfamiliar with. Even looking at the list of things they’ve produced (which isn’t very long at this point), I don’t recognize any of the titles. However, I can say that they’ve done an excellent job with this project. The animation is incredible, and the character designs are a lot of fun. One of them is this 3 bodied being that is basically just a triangle personified, or like if triplets stood back to back to back at all times. You can just tell with the style and story and that they had a lot of fun, and that’s really what I like to see.

Of the three that I watched, this is definitely my favorite. This also happens to be the most simple and straightforward story of the three. It follows one unnamed lady as she tries to help the local village fight against the oppression of the empire. It does take a half step forward and adds some layers to the story to make it more emotional and impactful, including a trade for life between the village leader and his granddaughter, and the Empire planning to take one of them away. The story feels very classical, almost like a play on the westerns inspired by the Japanese films that inspired Star Wars in the first place.

At the end of the day, and what all Star Wars stories boil down to, it’s a battle between good and evil. The unnamed lady reveals herself to be a Jedi, with a scarred face that no doubt has an incredible heroic backstory, and she saves the day. It never gets more complicated than “these are the good guys, these are the bad guys, now fight.” But it works really well. They lightly touch on environmentalism in the same way that all Star Wars stories do, where they talk about how the Force flows through all nature and living beings, including plants. But again, never too complicated and they always understand the objective.

Kinema Citrus is again a studio that I’m unfamiliar with. They have been around for a year or two longer than Studio Colorido, so they have a couple more projects under their belt, but they don’t attempt anything too far out of reach. Like the story, the animation is very simple. It allows for great fluid moves and lets things move as they’re intended. It all looks really great. This is my favorite purely because of just how solid it is, through and through.

“Lop and Ocho” is the most interesting one that I saw today, and probably the one that I’ll rewatch first when it’s all said and done. This episode tries to cover a lot of ground but leaves quite a lot to be desired in the end. The story sees a family broken apart after one of the daughter’s plans to join the Empire.

The story sets up a more nuanced and deeper discussion regarding the Empire and how the Empire can be used for the better, but in the end, it’s kind of ignored and disregarded. It just reverts back to the regular old “Empire bad” discussion and has nothing more interesting to say, even if it does get really close. It would be super interesting to have that discussion within a family that so clearly cares for each other, but they don’t attempt to go any deeper than “Empire bad.”

None of that stops this episode from having an incredible climax though, and one that gave me goosebumps all the way up to the credits. It was probably one of my favorite lightsaber battles in the entire all of Star Wars. The animation was great throughout the entire episode, but here is where it really gets to shine. It also brings the idea of the adoptive family to the forefront, but once again doesn’t approach it in any interesting way. This climax really does all the heavy lifting in this episode, but heavy lifting it does well.

Funnily enough, Geno Studio is another studio that I’m unfamiliar with. I think I might have accidentally landed the only 3 studios involved with Star Wars: Visions that I haven’t seen before. That’s kind of cool. They’ve done a couple of series, one film, and an OVA, but surely having an episode of Star Wars: Visions means they can only go up from here. The animation in this episode was the best part, so I’m excited to see where they go next.

What I’ve seen of Star Wars: Visions has been really great so far. I’m excited to dive into the rest of the series and see what they have to offer. I hope they do a better job narrowing their focus a bit. Either make the episode about this topic of discussion or just make the episode a fun lightsaber fight. Or do both, and do a better job at balancing. That’s really why I liked “The Village Bride” so much; the episode’s ability to know what does and doesn’t work and just focusing on what does. That’s what I look forward to seeing more of.

All episodes of Star Wars: Visions are now available on Disney+.