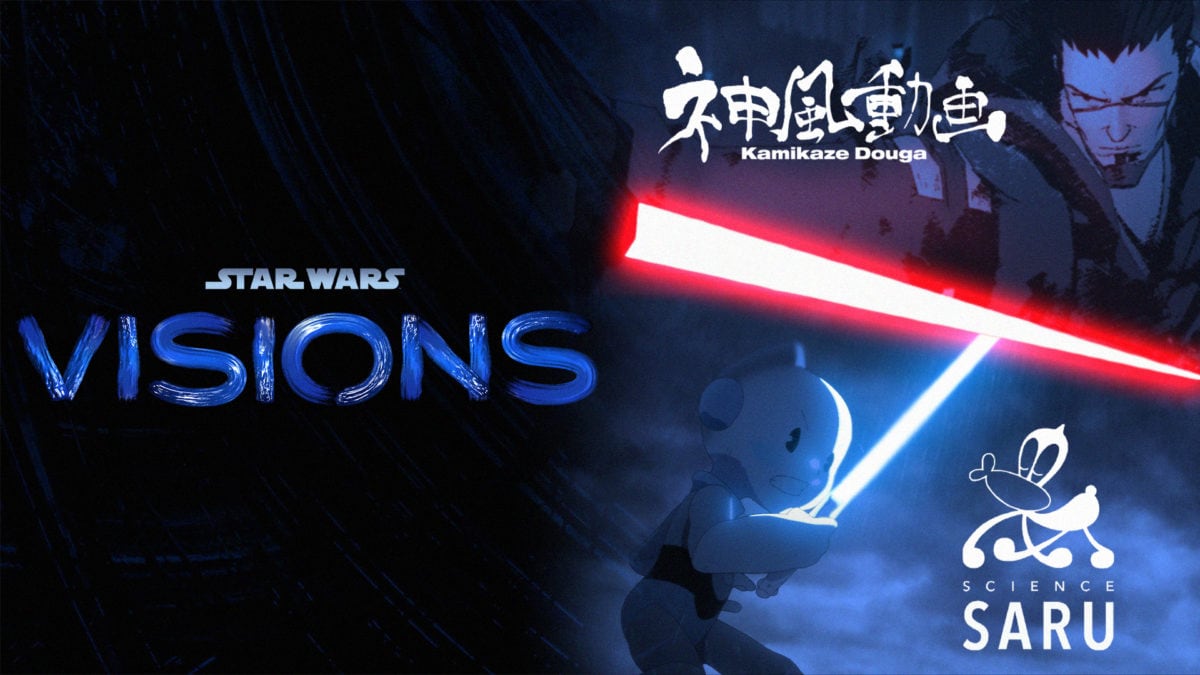 The first Star Wars Disney+ show to star 100% new characters, concepts, and history, Star Wars: Visions is sublime. It is jaw-dropping. It is fun, it is stoic, it is heartbreaking, it is visually and musically stunning. And more than anything, it is Star Wars.

With my friends Tucker and Alex reviewing a couple of episodes themselves (check out Tucker’s reviews here!), I had the privilege to review the episodes from the Kamikaze Douga and Science SARU studios and they were an absolute treat.

Presented in gritty black and white, Takunobo Mizuno’s The Duel is a series of traditional Japanese paintings breathed into motion with the iconic crackle of early cinema. Somehow, the effect is less anime and more manga, with a strong emphasis on the beautifully rich textures of each still image. The time-honored art style is given a light assist with some flourishes from modern computer techniques and fantastic use of limited colors which help to give it a gentle sci-fi aesthetic. I was a little disappointed that some of the frame-to-frame animations looked a bit strange, but each frame itself was simply immaculate.

Beyond the art style, I also strongly appreciated how Mizuno lets the visual action and soundscape tell the full story with very little dialogue. The brassy music evokes classic John Williams, with a little Japanese flair from the traditional drum beats.

I noticed that the score referenced “Duel of the Fates” and Kylo Ren’s theme to create a cohesive Sith battle score, as well as Princess Leia’s theme in the epilogue. Coupled with some iconic Star Wars sound effects and wipe transitions, and this feels unquestionably like a Star Wars story.

For the Japanese twists, I loved the detail of the Stormtroopers having long braided hair sticking out from their helmets. Additionally, The Duel is a perfect encapsulation of the classic Samurai tale, something like a miniature Yojimbo.

Unfortunately, there wasn’t a whole lot in the story, but nonetheless, it’s a wonderful visual and musical love letter to Samurai, Star Wars, manga, and traditional Japanese art. An exciting reinvention of such a well-known Hollywood universe.

Right from its opening shots, Eunyoung Choi’s Akakiri feels like a clip from an epic full-length quest film. The short is a lot of fun, featuring some funny characters going on an adventure through GORGEOUS painterly sceneries set to a homely drum-driven score (some quick research tells me they might be Taiko drums? The sound reminded me of Indian tablas).

But the good vibes mask a darker, more dramatic inner story that’s heavily heightened by the intensity of the Japanese voice acting. This plotline leads to an ending twist that was just a little too familiar for me – Writer Yuichiro Kido introduces a certain dilemma that’s lessened for being so close to one of the most famous dilemmas in Star Wars.

This moment could have been super interesting on its own if anyone didn’t already know the iconic Star Wars version, so I think it’s unfortunate that they chose to do this in a Star Wars-branded project. As it is, I would have liked something a little fresher and different. Overall, the episode is a powerful mix of beauty, humor, love, and fear, and the ending successfully ties up each of its emotional storylines.

Abel Góngora’s T0-B1 instantly feels wildly different from Akakiri, despite being from the same studio. The change in style was a little jarring at first, but by the end of the episode, I was really starting to enjoy the liberties Góngora was able to take with the fluid shapes, the ever-changing textures, and the evolving color palette.

My favorite style was a specific Jedi daydream that T0-B1 has, which is animated with almost a kind of blacklight effect. As great as this episode is, I couldn’t stop thinking about that short sequence and how much I’d love to see an entire fantasy episode set within a daydream with that particular style.

But for all the time Góngora spends on cuteness, Yuichiro Kido’s script actually accelerated a little too quickly for me. The script starts as a fun Astro-Boy-inspired short but rapidly evolves into a very classic Star Wars story, representing every protagonist fused into one archetypal legend. It’s a cohesive distillation of all the Star Wars journeys into the story of a single character, but in the end, I felt like the script was more of a “Star Wars’ Greatest Hits” than anything particularly new. Thankfully the direction, visuals, and uniqueness of the basic idea are strong enough to still let T0-B1 be a lot of fun to watch.

I’m very happy with this batch of episodes. The only qualm I have is that the episodes seem to adhere too closely to the basic stories they’re inspired by (whether Star Wars or Kurosawa), so I’d like future episodes to be a little bolder with their story choices, and trust that the audience will be there as long as the story is strong.

But I’m stunned by how the animation, music, and even storytelling approach feel fresh from episode to episode. Each episode of Visions broadens the universe of what Star Wars can be by letting international creatives explore what George Lucas’ world means to them. I love the cultural pride on display here and how no two episodes are alike, a powerful showcase of the diversity and talent in Japanese animation. Star Wars: Visions is something I don’t think I’ve really seen since The Animatrix, and dare I say it’s a solid follow-up to that legendary achievement. We are blessed to have these 9 episodes and I can’t wait to hear about a season two announcement.

All episodes of Star Wars: Visions are now available on Disney+. Be on the lookout for Alex’s reviews tomorrow!