The latest entry in the Marvel Cinematic Universe, Eternals, was screened at Festa del Cinema di Roma where we were lucky to have a reviewer with access!  Here’s his spoiler-free review! 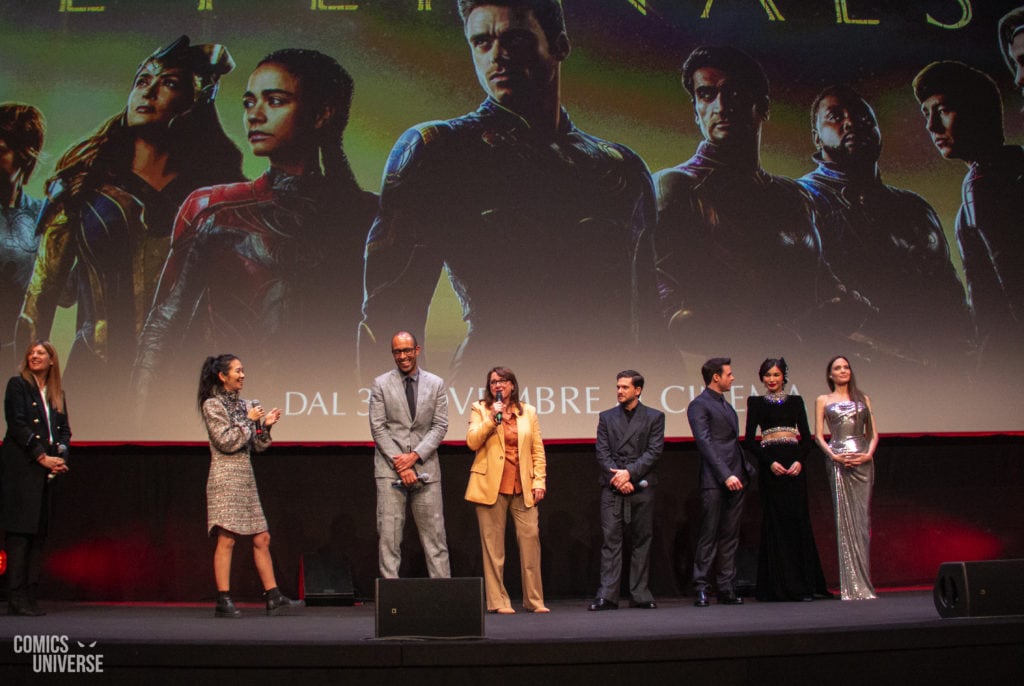 Note: this review was written by Luigi Parentela of Universo Cinematografico Marvel.  A special thanks to them and ComicsUniverse.it for use of the image above from the event.

One word, one message, and a mantra is spoken throughout and achieve its purpose: to make the viewer remember everything they’ve seen in Eternals. A word followed by many others with the goal of carrying the audience alongside this epic story.

This is mainly due to director Chloé Zhao – recent Oscar winner for Nomadland – and her vision for the movie that blends indie and blockbuster. A movie so unique among the MCU landscape that for the first time, destabilizes the ones who are used to seeing standard action/comedies like past Marvel movies.

Eternals is far from being a perfect movie, it has its flaws and some other wasted opportunities, but it’s impossible to hide the enthusiasm of seeing something different even with some limitations imposed from its genre. The narrative continuity is a constant limitation for the screenwriters (of a movie, show, or comics) and unfortunately, it’s an important element you have to consider if you want to show realistic and creative world-building.

The comparison between Eternals and Zack Snyder’s Justice League done by some US critics is out of place. While both movies have resemblances in regards to epicness and unison between superheroes and divine figures, Eternals is definitely different having entrusted everything to Chloé Zhao.

Also underlining the extreme difficulty of adapting something so complex on the editorial level to the big screen (the comic stories related to the Eternals can be counted on one hand), is handled triumphantly.

Taking a cue from the iconic book by Christopher Vogler, Eternals brings attention to the public of an apparently informative depiction of the epic figure of the Hero and then, with the passage of time (centuries) stretches out his hand and creates an empathic connection hardly found in other Marvel Cinematic Universe films.

Director Chloé Zhao has succeeded in the very difficult task of managing so many protagonists in the best possible way, never having one play secondary to another, giving the right space to each of them in order to instill in the viewer a clear message for each Eternal present on the screen.

The bewitching beauty of this authorial completeness is the fact that it has managed to associate many themes – the film is made up of layers and substrates of social, political, and environmental agenda criticisms.

The harsh and constant discussion of the issues that each of the Eternals have lived in a conscious way and not against their existence: I have glimpsed at a very thin link that unites God to Man in this, and the result is of the highest level.

Many hours after the first viewing, the love, fear, passion, hatred, and much more felt by each of the protagonists of Eternals continues to echo through my mind. It is necessary to compliment – even more so after seeing a portion of the cast in-person – the splendid interpreters of the film: Angelina Jolie, Richard Madden, Kit Harrington, Gemma Chan, and Zhao. Simply. Perfect.

This is not a watershed film for the Marvel Cinematic Universe but nearly, given the amount of content and mythology dealt with throughout history. In the past other Marvel Studios’ products have barely scratched the surface of the Cosmos, and the infinitesimal narrative branches that can be covered now, but with the Eternals, everyone will be able to realize the potential future available to the MCU.

Potential with a high rate of risk given the ambition that follows – the same has always happened in Marvel Comics – but with possible production results that could serenely make everything seen during the ten-year Infinity Saga quite pale in comparison.

Eternals really has many spectacles and few shadows and even with its’ flaws (the management of the Deviants above all, a potentially interesting yet unexplored topic), it manages to conquer the audience. I found many parts of this film to be bright and strong like Thena’s long blonde hair (played by the beautiful Angelina Jolie), but certainly among this stands outwardly a powerful artistic frame of the highest level.

A vision of Chloé Zhao’s who enters boldly by right in the restricted circle of the best works of this cinematographic genre. If you loved her artistic flair in Nomadland or The Rider, know that here you travel at similarly unique levels. A spectacular picture accompanying realistic and at the same time, imaginative models of these super-beings, practically gods, who suffer alongside humans and fight for them while renouncing their divine mission.

In the finale – sorry, no spoilers! – a familiar theme is addressed as has never been done before by a Marvel Studios’ film. The protagonists are at odds with each other, with different ideas, and can’t agree on what to do nor on the will of the Celestials who sent them to protect humanity.

The third act focuses precisely on this family relationship by transporting the audience and leading it to empathize with the characters. It is not the usual Marvel film also for this reason, and the division between critics and audiences will enhance its peculiarities.

The technical sector excels in several points and gives Eternals a unique sacredness – different from the vision of Zack Snyder – a gesture of definite reverence and respect towards Jack Kirby, the original creator of these characters. Even the director herself stressed several times, during the press conferences that followed, the vision of the film and how Kirby represented a source of inspiration.

Zhao even includes visual references to the panels illustrated by Romita Jr. during Neil Gaiman’s run. High-level technical and sound aspects for a film, Eternals must be seen on the big screen. There is no streaming platform that compares, these are films that thrive on the big screen.

The Eternals will be available exclusively in theaters on November 5, 2021.