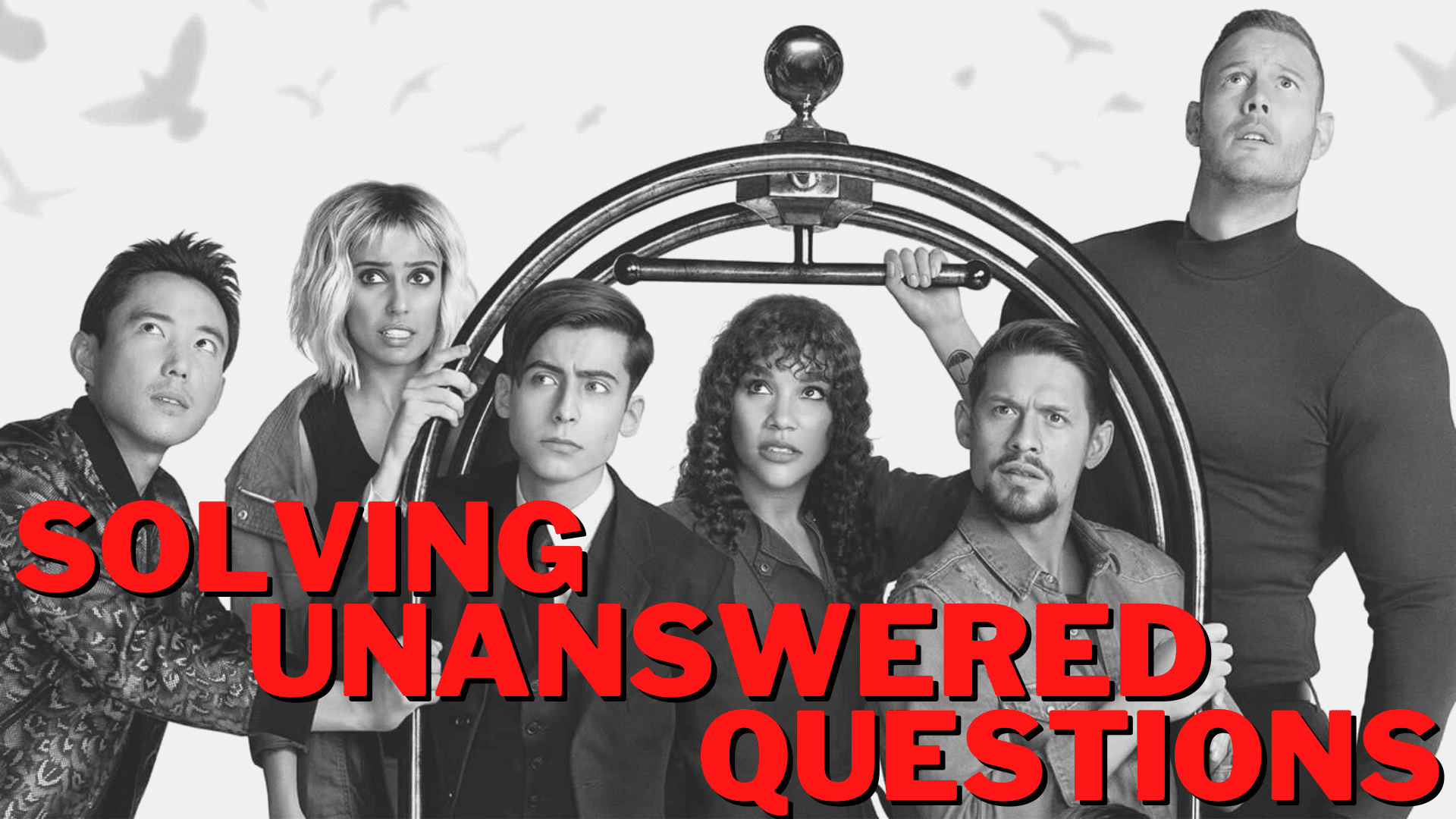 Umbrella Academy season 3 has been on Netflix for about a week, and ever since I was finished with the binge I’ve been theorizing on the future of these characters. Elliot Page, Tom Hopper, David Casteñeda,  Emmy Raver-Lampman, Aidan Gallagher, and Justin H. Min are all back and operating in full force.

The season brings a new beautiful layer to just about everyone involved, while also leaving us with question on top of question. But, before we can properly decipher what the answers to these unanswered questions might be, we need to talk about the events that led to this.

[Warning: Spoilers for Umbrella Academy season 3, including the finale. Beware if you’ve not yet finished the season.]

In the climactic moments of the season, Reginald revealed to the kids that Hotel Oblivion was a place in another dimension where he could rebuild the universe. A kind of “smash glass in case of emergency” situation, and Allison had agreed to help him wrangle the Umbrella/Sparrow gang into the Oblivion in the hopes that she could get Ray and Claire back.

But after Allison realized that Reginald’s mission to rebuild the universe included her siblings being in great pain and potentially losing their life, Allison killed Reginald and took over the mission for herself. She then pressed a mysterious button and voila, we are presented with a ton of unanswered questions.

So What Did The Button Do?

Just as Five theorizes in the final moments of the episode, I believe Reginald did exactly what he intended: he reset the universe. But the caveat might be that Allison and the rest of the kids didn’t realize at the time is that Reginald rebuilt the universe in his image.

As we see just before the credits begin to roll is that now the skyline of New York City has been filled with buildings with the Hargreeves name slathered all over. Like he’s altered the universe to make him the king of the world. But then keeping in mind Allison’s part of the deal, the resulting universe makes all that much more sense.

Last we saw Ben he emerged from the elevator alongside the Umbrellas (sans Allison, we’ll get to her later). He then split off after Luther and Klaus left, determined to put space between himself and the Umbrellas. But, the post-credits scene for the series throws a bit of a curveball our way, showing Ben sitting on the very same train in Korea where he was spontaneously born.

There are a lot of interesting things going on here. The Ben on the train has a different, more comfortable, and laid-back demeanor than the Sparrow Ben we knew from season 3. Combine that with a noticeably different haircut and the glasses he’s wearing and it makes sense to wonder if this could be another new Ben, or perhaps a version of the old Ben if he’d survived and didn’t have powers.

Either way, it seems that post-credits scene Ben is quite different from the Umbrella Ben we lost in season 2 and the Sparrow Ben we met in season 3. But it could also make sense that this is just the very same Sparrow Ben who emerged into the new world alongside the Umbrellas.

Maybe the new laid-back demeanor is just the comfort of returning to a place he feels at home. Maybe the new haircut and glasses are just an attempt from Sparrow Ben to reinvent himself and tap back into the soft side we saw in “Wedding at the End of the World.” Or maybe after all he went through last season, he just kind of mellowed out. I guess we’ll see.

Yeah, so…remember the part where Allison didn’t like Sloane at all? When she accused Luther of only liking Sloane because Luther is settling for her after Allison turned him down? Do you remember all of that?

Allison stooped to incredibly low places to get what she wanted, including killing Harlan. Someone who was, by all means, a completely innocent man with powers he couldn’t control. If you don’t catch my drift, I am suggesting that one of the points of the deal that Allison and Reginald made was that Sloane not be a part of this new world.

There were times in season 3 when Allison’s anger and potentially out-of-character actions were justified. But she continued to do worse and worse things, including rumoring people to do things that they otherwise wouldn’t agree to do.

This was a very disgusting turn of events for a character who was otherwise pleasant. I think it would be in line with the choices that season 3 Allison made, for her to completely write Sloane out of existence just to get back at her or Luther or whatever. Her motivations sort of became muddy when she crossed certain lines.

Why Have They Lost Their Powers?

Now, there is the possibility that the children losing their power was just a side effect of the machine. We did see that same little glowy stuff that gave Harlan his power being sucked out of the children as the machine worked to construct the world around them. But, that doesn’t tell the whole story.

Luther wasn’t present when the machine did what it did, and he’s also missing his powers. At the very least, whoever saw to it Luther came back went out of their way to make sure that he was without his powers.

But, once again looking at this through the lens that everything was likely a decision dictated by Allison or Reginald, you can kind of form some answers. I can certainly imagine a world where Reginald would refuse to give his children their powers.

After all, he did make himself king of the world and then just welcome them all to be a part of it. Typically, they wouldn’t let that slide. Their immediate response would usually be to go after Reginald and force him to put things back to the way they were. BUT, if Reginald was controlling every little minuscule aspect of this new reality, he’d likely make it easier on himself by just stripping them of their powers.

What Did Allison Want? What Will She Do To Keep It?

If this is a decision made by Allison, it’d be a little more confusing. On one hand, maybe she just thought it would be a gesture of good faith to free her siblings of their powers that have had dire consequences for them in the past. But that would be out of character.

However, it is possible she did it for the same reason that Reginald did. The very first thing we see after Allison presses the button is Allison arriving home and reuniting with Claire and Ray. While the real logistics of that are a little weird considering they existed in different times, it makes sense if this is just a manufactured reality they built from Oblivion.

What if Allison has only fallen further, and stripped her siblings of their powers of that they couldn’t possibly be a threat to the family she’s reuniting with.

It’ll be interesting to see where Umbrella Academy goes in season 4 if it gets greenlit. The family has all gone in their own direction, living who knows where in this reality that Reginald and Allison created. Will they work to get their powers back somehow, or will we finally get to see what this family looks like without them? Maybe my assumptions are completely wrong, and we’ll find the team in season 4 all settled in happy lives across this new reality.

So what do you think will come of these mysteries left in Umbrella Academy season 3? Let us know in the comments or on social media!