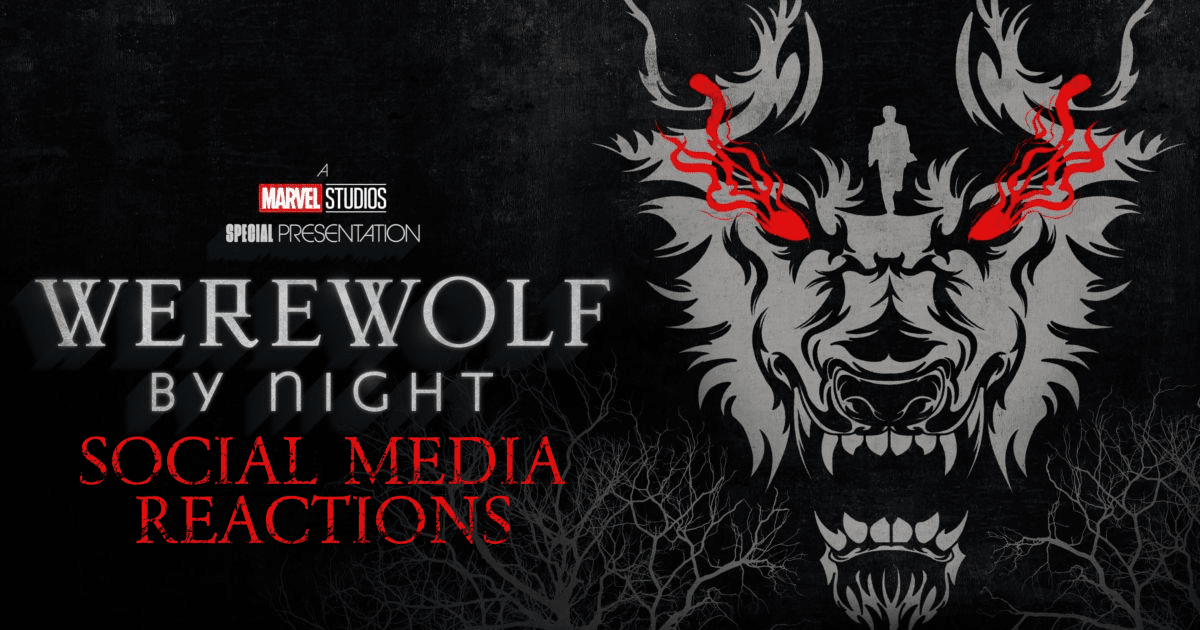 It’s fall in the northern hemisphere, and that means spooky season. What better way for Marvel to celebrate all things frightening than with their very own comic lycanthrope, Werewolf By Night? Who needs pumpkin spice when you can spend about 52 minutes of black and white MCU monster-movie love with Gael García Bernal and Laura Donnelly?!

Although there’s been lots of talk about Werewolf by Night, the first footage of the Halloween special wasn’t screened publicly until a few weeks ago at Disney’s D23 Expo. The trailer was a homage to black and white horror goodness and confirmed our reporting about the appearance of Man-Thing as well as Laura Donnelly’s Elsa Bloodstone.

We knew composer Michael Giacchino was directing it, but we learned at D23 that screenwriters Heather Quinn and Peter Cameron penned the script for the standalone show.

The Cosmic Circus has been following the story and breaking news from Marvel’s Halloween special presentation since the very beginning. And now that the social reactions are in from across the Twittersphere, we’ve got those for you too on the latest MCU entry. Read further to get the early buzz on the special… IF YOU DARE!!

#WerewolfByNight REVIEW: HORRIFYING. SEXY. Marvel changes the game, delivering a TWISTED but fun affair that surpasses icons like Evil Dead & Halloween. WOW… This isn’t just another special, it’s the BEST horror ever made! GREAT music too. A fitting end setting up what’s next pic.twitter.com/LOtRgMt1bW

“…a love letter to classic horror, to universal monsters, to practical effects work, and to horror itself.” – Kate Sánchez

#WerewolfByNight is a love letter to classic horror, to universal monsters, to practical effects work, and to horror itself.

Gael is perfection. The choices of when to use practical and when to CG is perfect.

Werewolf by Night is perfect. pic.twitter.com/QQErVcabW4

Super violent, with a morbid sense of humor and plenty of heart. Gael García Bernal & Laura Donnelly are welcome additions to the MCU. Man-Thing steals the show! pic.twitter.com/OintiS3TCi

“..can’t wait to see him walking around the theme parks next Halloween.” – Dan Valero Fletcher

WEREWOLF BY NIGHT is a classic monster movie with a capital M. The black and white allows a surprising amount of blood and gore. Love the design of the titular werewolf; practical makeup and fur. Can't wait to see him walking around the theme parks next Halloween. #FantasticFest

Marvel’s WEREWOLF BY NIGHT is a B-movie flavored monster mash that’s clearly made with love and passion by total horror nerds. As a Marvel fan and a horror fan, I hope they explore more of this corner of the universe. And I hope Michael Giacchino is given the reins.

“…i am obsessed with Elsa Bloodstone and Jack Russell! the chemistry!!” – Victoria Edel

to suddenly shift topics: the Marvel Halloween special Werewolf By Night is so great and i am obsessed with Elsa Bloodstone and Jack Russell! the chemistry!!

“…That was such a fun time at the movies. Most violent thing Marvel has done yet.” – Ernesto Valenzuela

I’ve just attended a theatrical screening of Marvel Studios’ #WerewolfByNight. Unexpected to see the MCU at Fantastic Fest but man. That was such a fun time at the movies. Most violent thing Marvel has done yet. @m_giacchino has made a hell of a directorial debut! pic.twitter.com/5K2FQ2Kc4d

“..the right amount of suspense to draw you in and get you terrified.” Anthony @ The Movie Podcast

Michael Giacchino’s #WerewolfByNight captures the aesthetic of old 40s Hollywood horror but with a Marvel flair. It’s has the right amount of suspense to draw you in and get you terrified. Gael García Bernal is fantastic and Lauren Donnelly is bad ass!@MarvelStudios @m_giacchino pic.twitter.com/3Xxb6VwElP

“…And yes, in glorious silvery Black and White. If it wasn’t, it would be super-scarlet bloody.” – Richard Whittaker

Ok, WEREWOLF BY NIGHT is exactly what I wanted. Total love letter to Universal, and Marvel's Roy Thomas and Gene Colan-era horror comics. And yes, in glorious silvery Black and White. If it wasn't, it would be super-scarlet bloody. #WhateverKnowsFearBurns #FantasticFest

Werewolf By Night is creature feature monster mash radness throughout. There isn’t anything to not love about this lil monster gem. #WerewolfByNight #FantasticFest pic.twitter.com/hPTRWER2r6

Most long-form reviews of the special will release in early October when Disney’s press embargo ends, but some lucky critics and fans got to view the show unencumbered by embargo as part of Austin’s Fantastic Fest. Fantastic Fest is “the largest genre film festival in the US, specializing in horror, fantasy, sci-fi, action and just plain fantastic movies from all around the world.”

Social reviews like the ones we spotlighted above are short and sometimes will be used by the studios to help promo a show. Long-form reviews get into the weeds of what worked and what didn’t.

Marvel’s Werewolf by Night officially releases on October 7, 2022. You can stream it then on Disney+. And while you’re waiting, check out Vin’s curated reading guides if you’re curious about the comic history of some of the characters, including Werewolf by Night, Elsa Bloodstone, and Man-Thing.

We’ll be back here at The Cosmic Circus with our review and more reactions after release. Until then, our writers will celebrate the spooky season by rewatching WandaVision’s “All-New Halloween Spooktacular!”

Are you excited about Werewolf by Night and Michael Giacchino’s love letter to monster movies? Please share your thoughts with us on Twitter @MyCosmicCircus or join our open to the public free discord community. We may have pointy teeth, but we don’t bite… we’re not Dracula, after all.