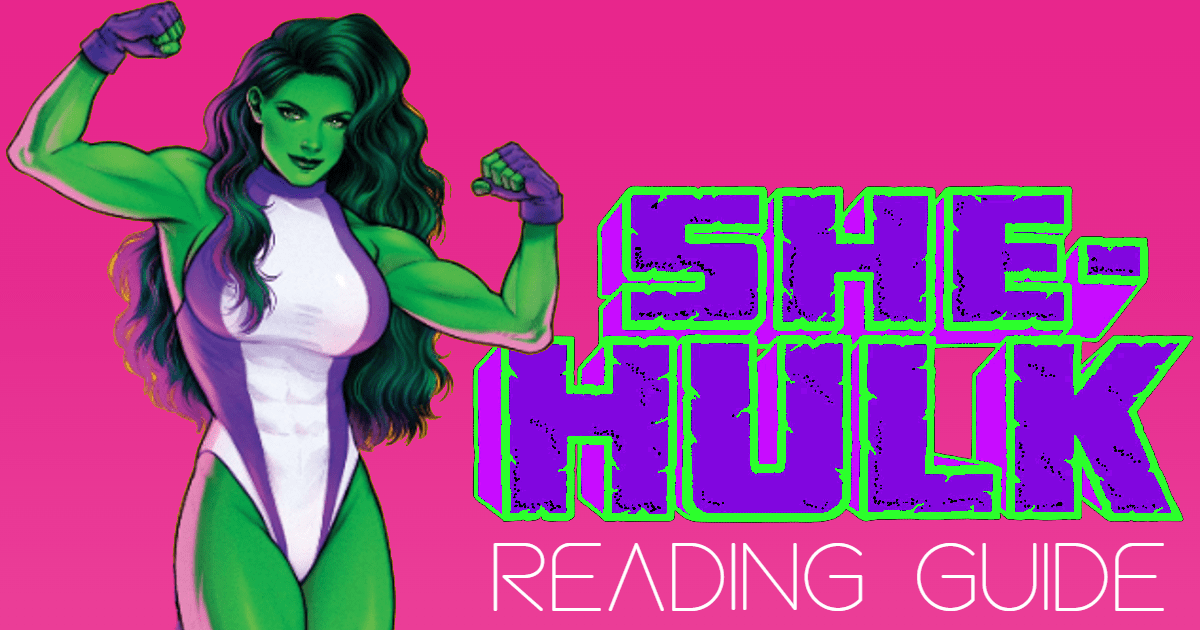 Hey you! Thanks for coming back for the modern She-Hulk reading guide!

Jennifer Walters is one of the smartest, funniest, and strongest characters at Marvel. With a history as beloved as hers, the only way we could do her comics justice was with TWO reading guides! So check out our classic She-Hulk reading guide if you want to see how Jen developed over the 80s and 90s, which includes her fourth-wall-breaking solo with John Byrne and her major appearances on both the Fantastic Four and the Avengers! But if you want to jump into her modern stories (which are inspiring the Disney+ show this summer!) then here is what you need to read:

These comics build on the foundation laid by Byrne, especially in the solos by Dan Slott (2004, 2005) and Charles Soule (2014). But Jen is always a team player, and her modern comics featured her in a number of group dynamics, including the Future Foundation, A-Force, the Avengers, the Defenders, and TONS of Hulk Family events! In fact, there was so much Hulkmania that other She-Hulks started popping up! Her modern comics also fleshed out her relationship with Matt Murdock, who is expected to tie into the show in a major way. So sit back, relax, and enjoy the new adventures of She-Hulk!

“The benefit of being a Hulk is that if you’re having a bad day,
it’s usually pretty easy to find someone deserving a punch in the face.” 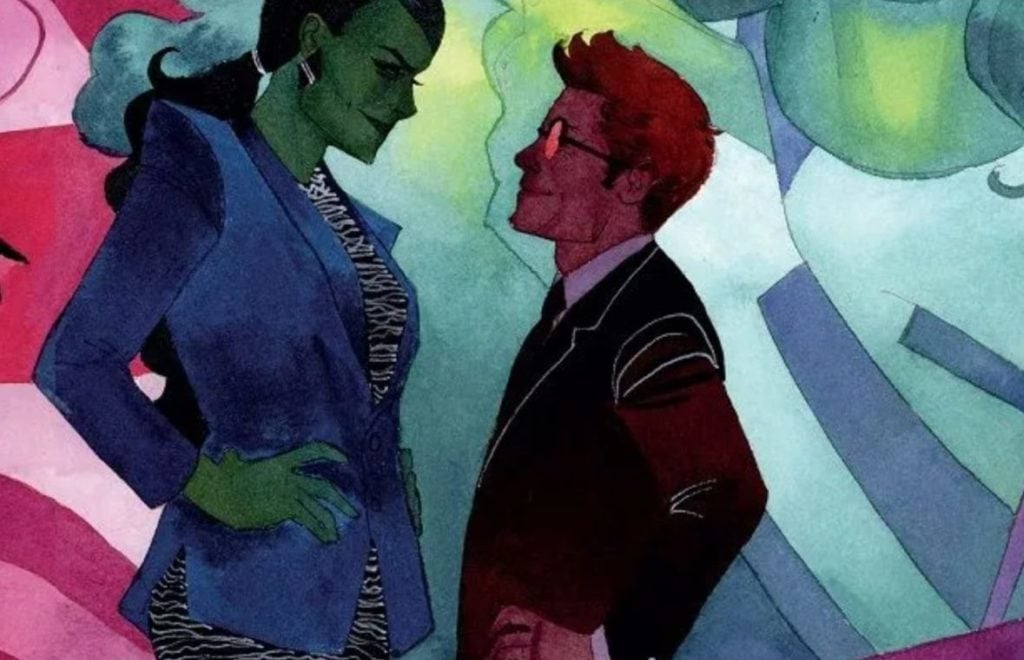 After being fired from the Avengers, Dan Slott and Juan Bobillo put Jen’s lawyer life front and center with an absurdist spin on her superhero world. In fact, this wacky run is expected to be a strong influence on the Disney+ series as Jen works at GLKH, which is confirmed to be her law firm in the show. Slott and Bobillo also play with She-Hulk’s history in the comics, even leading to a confrontation with the TVA due to time travel shenanigans! While the first part of their run had low sales, it was able to be revived for a second series in 2005 thanks to good reviews. This is our #2 recommendation on for the modern era of She-Hulk.

Slott’s two series are highly recommended because they’re easy to get into and redefined Jen for the modern era. His 2005 run lasted for a good 21 issues before Peter David took over, giving Slott one of the longest consecutive runs in the character’s history. David continued the series for another 16, but he radically changed so much that it really feels like an entirely different run. The David series is hit or miss for many readers, so give it a shot and judge for yourself!

During this time, Jen also factored into a number of crossovers, including Avengers: Disassembled, Civil War, and the giant World War Hulk event. She also had a recurring position on the Fantastic Four again and a new version of the Defenders.

The She-Hulk By Dan Slott Omnibus and more is available on BAM! [As affiliates of BAM! we may receive a commission from purchases made via this link]

Following her new solos and WWH, Jennifer and the Hulks exploded in popularity again and were everywhere in the late 2000s. She started as a co-star in Hulk, then evolved into a mentor for Hulk’s future daughter in All-New Savage She-Hulk and She-Hulks. Aside from some great She-Hulk one-shots, the main event of this era is actually World War Hulks, a wild crossover that featured Doctor Doom, MODOK, the Leader, and “Hulkified” versions of several Marvel heroes.

As great as Jen’s comics have always been, the early 2010s was one of her greatest eras since Byrne. In the aftermath of the late 2000s Hulkmania, she continued her duties on the Fantastic Four, eventually moving on to the new Future Foundation. Under the creative genius of Matt Fraction and Mike Allred, the quirky FF team of She-Hulk, Ant-Man, Medusa, and Darla (a pop-star in a robotic Thing costume) became a sensational hit series.

Shortly after FF ended, Jen picked up her next solo in 2014 with Charles Soule and Javier Pulido. This is the #1 recommended reading before the new Disney+ series. The way Jen’s clients showcase characters across the wider Marvel universe is likely going to be a strong inspiration for the upcoming show, and there’s even a fantastic arc where Jennifer Walters has to face Matt Murdock in court!

Cosmic Circus writer Emily is a huge fan of the run, saying “Charles Soule is one of my favorite writers, so going from his Daredevil run to She-Hulk was so different and fun! He writes She-Hulk so well and every issue was exciting.”

In the mid-2010s, She-Hulk spent some time with her pal Patsy Walker, joined Luke Cage and Sam Wilson’s Mighty Avengers, and had a side role in Amadeus Cho’s Totally Awesome Hulk series. But her biggest moments were A-Force and her solo series.

A-Force was a well-liked all-women Avengers series created by superstars G. Willow Wilson, Marguerite Bennett, and Jorge Molina in the aftermath of Secret Wars (2015). Then following Bruce Banner’s death in Civil War II, Mariko Tamaki carried Jen’s story into Hulk (2016) and She-Hulk (2017), where Jen takes up the Hulk mantle in his absence but her Hulk form turns gray. Tamaki used the opportunity to present a slow and somber exploration of trauma and an interesting return to Jen’s Savage She-Hulk origins. The run wasn’t super popular, but has its fans, especially with the dramatic finale in “Jennifer Walters Must Die!” (#159-163).

In the late 2010s, She-Hulk exploded as a guest star across the Marvel universe, with several minor appearances in a ton of different books. Between her solo series, Jason Aaron took over the Avengers title and re-introduced Jen as a green brutish Hulk! Jen is able to think normally in Hulk mode, but her body is as out-of-control as Bruce Banner’s original Hulk.

Aaron’s series has been a controversial choice among She-Hulk fans because it arguably takes away almost everything that made Jen unique from Bruce. Experimenting with the character, Aaron also tried a Jen/Thor relationship and a “World War She-Hulk” storyline, both to mixed reviews. The run is definitely worth a look for different perspectives on how to approach She-Hulk, but I would not recommend it as your first introduction to the character. Jen also had an occasional role in Al Ewing’s legendary Immortal Hulk series which is worth checking out for modern horror fans.

Finally, She-Hulk picked up another solo series just this past year. Despite the stellar cover art by Jen Bartel, the writing and interior art have yet to achieve the same sexy, strong spark, making the series a bit disappointing so far. Just before that, She-Hulk also popped up in two highly recommended one-shots, as well as the Hulk’s Grand Design historical miniseries.

And now you’re up to speed with Jennifer Walters! Where are you gonna start reading? What are you reading now? Let me know on Twitter @vinwriteswords and remember to follow the site @MyCosmicCircus for more gamma-radiating goodies!

After the stunning reveal in last week’s trailer, we can’t complete our She-Hulk guides without giving special mention to our lord and savior, the fabulous Frog-Man! So presented here for the first time ever…. is the FROG-MAN READING GUIDE!!!! While this sexy swimsuit is something only a few could pull off, there have been at least four Frog-Men in Marvel comics (possibly even six!). The original amphibious avenger was François LeBlanc, one of Daredevil’s earliest villains. With his great jumping skills, he joins a team of animal-themed crooks called “the Ani-Men,” and is later given frog-like abilities by Count Nefaria. Unfortunately, Froggy and the Ani-Men are eventually killed while fighting Iron Man.

The second Frog-Man, Vincent Patilio, actually went by the name “Leap-Frog.” Vincent designed the modern version of the costume which is seen in the She-Hulk trailer. A bionic exoskeleton, the suit increases his strength and uses electrical coils to amplify his leaping abilities, with computer guidance for landing accuracy. After Vincent’s wife died of cancer, his son Eugene dons the costume as the “Fabulous Frog-Man,” becoming the iconic semi-heroic iteration many fans love today. Despite being a bit of a bumbling idiot, Eugene has gone on to earn a large recurring role across the Marvel universe (he currently has an ongoing spot in Christopher Cantwell’s Iron Man). At one point Eugene even auditioned for the Fantastic Four and the Defenders, and you know what? I’m proud of him for trying 👍🐸

A fourth frog foe popped up in the early 2000s when Buford Lange finds an old Patilio costume, but he quickly meets his end in an incredibly poignant issue of Daredevil. Since then, there have been two other Frog-Men sightings in the Marvel universe, but it’s not clear who was in the costume either time… which begs the question: Just how many Frog-Men are out there?