Shang-Chi and the Legend of the Ten Rings is the first Marvel Studios origin film since the radical universe-altering events of Avengers: Endgame and Loki. Before director Destin Daniel Cretton took this job, he was primarily known for grounded true-story dramas like Short Term 12, The Glass Castle, and Just Mercy. Cretton is the latest in a line of Marvel directors transitioning from small drama darlings to big-time blockbusters, a group including Ryan Coogler (Black Panther), Cate Shortland (Black Widow), and Bassam Tariq (Blade). Similar to Black Panther’s infusion of African and African-American culture, Shang-Chi is notable for showcasing a cast and creative team of majority Asian descent, making the gigantic superhero blockbuster a significant moment for Asian-American representation.

As an Asian-American, a huge fan of classic martial arts cinema, and of course a big fan of Marvel, I had a LOT of excitement and trepidation going into Shang-Chi. From everything I knew going into this movie, it could have been curated to my own personal tastes, but this feeling was as awesome as it was terrifying because I was worried I may have overhyped myself for it. Just a few days ago, I watched Cretton’s feature debut Short Term 12, and fell in love with it for being an incredible achievement of authenticity and optimism within a stunning portrayal of love and community. It really seemed like Shang-Chi could do no harm. So did I love it? Well, it’s complicated. Let’s talk about it together.

Shang-Chi starts strong before escalating into something WAY bigger and WAY more than anyone was expecting. The action truly is stunning, particularly the choreography in the human combat. So much of the magic of this film rests on the shoulders of martial arts choreographer Brad Allen, a close collaborator of Jackie Chan who just passed away at the end of August. Thanks to his work under Cretton’s direction, the film is a tremendous love letter to the Hong Kong cinema classics, homaging everything from graceful, mystical wuxia to Jackie Chan’s physical comedy gags. Of course, the film eventually submits to the Marvel of it all with a BOMBASTIC finale which could put Avengers: Endgame to shame. Some parts are so fast, crazy, and intricately choreographed, especially towards the end, that I am very excited for the digital release so I can slow these scenes down and go through them frame by frame. From small hand-to-hand fights to wildly bonkers concepts, the film is full of OH SH-T! moments where I had a ridiculously huge smile that even my COVID mask couldn’t contain.

I am generally not a fan of writer Dave Callaham (Wonder Woman 1984, Mortal Kombat), and true to form, I felt much of the plotting and dialogue were noticeably amateur. [Though, in comparison to some actual HK martial arts cinema, this screenplay would be Academy-Award winning material]. Nonetheless, Cretton’s strong direction makes up for it, with the action and emotion carrying the heart and joy of the film more than the script itself. With the complex storyline, it was still hard for me to register that this was the same director as Short Term 12. That’s not necessarily a good thing or bad thing, just a comment I had while watching, in comparison to films like Thor: Ragnorak, Black Panther, and Guardians of the Galaxy, which are very closely tied to the filmographies of their respective filmmakers. I feel this may be due to Callaham being the primary writer with Cretton only contributing additional rewrites. 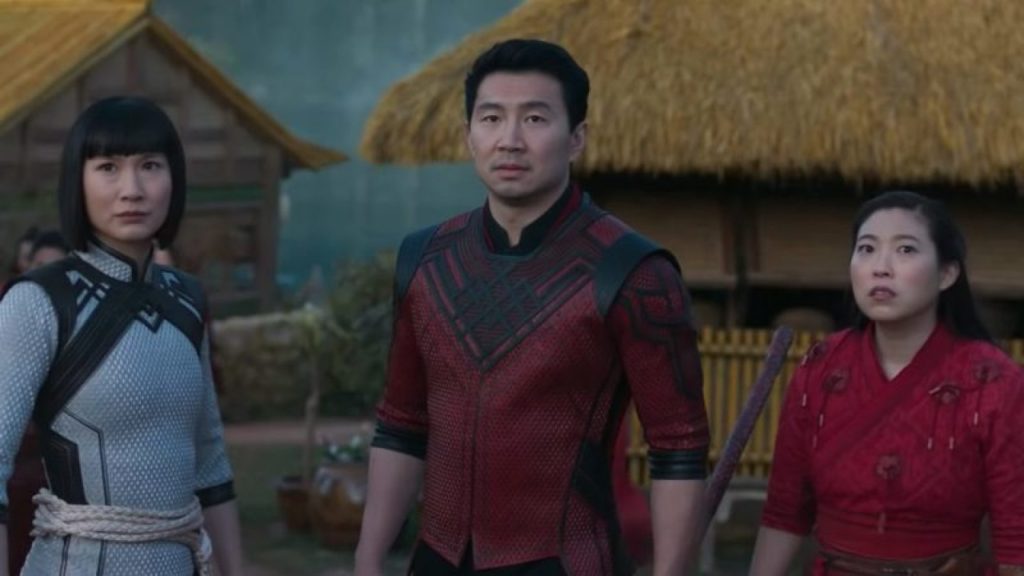 The acting was one of the strangest qualities of the film. Simu Liu’s Shang-Chi, as loveable as he is, is mostly a blank page for the audience to project themselves onto. Meng’er Zhang as his sister Xialing was magnificent in her physical performance, but her spoken delivery felt wooden and slightly unrealistic (the writing didn’t help). Awkwafina’s Katy and a surprise guest star are great for occasional comedy bits and they do the best they can to serve the film, but I honestly felt both characters overstayed their welcome. I feel the writers needed to give much more depth, intrigue, and purpose to Katy to justify the screen time she is given, and I hope to see much more complexity from her in her future Marvel appearances. Unsurprisingly, Tony Leung steals the damn show with his eyes exuding entire essays of emotion with each glance.

I felt the music (both soundtrack and score) resonated similarly to the writing and acting — the main theme is cool and memorable, but a lot of the side music felt like identity-less temp music. I hope to listen through the full soundtrack and movie album closely before rewatching to see if I can get a better appreciation for the nuance of Joel P. West’s score and 88rising’s curated hip hop selection. (West has been Cretton’s constant collaborator for his entire career.)

The sets and costumes, especially in the latter half, are generally great and seemed intricately detailed, but I never felt the same awe that I felt in Black Panther. It could be possible that the difference is related to Shang-Chi being the only Marvel film to have its production shut down during COVID, with the sets having to be rebuilt several months later under unprecedented restrictions. Given the delays that followed, the film possibly had an excess of time in the edit bay, and I feel it shows. The movie feels like it was painstakingly screen-tested then carefully edited down to the mass-audience-approved form. The film pushes forward with a relentless pace with not a second wasted. Funny scenes go just a little too long while drama and exposition are just a little too brief. Some flashbacks recur multiple times for redundant audience reminders.

I appreciated how much Mandarin language is used throughout the film, even for important lines, including exposition, humor, dialogue, character growth. I did have one confusion though: Perhaps as a result of audience confusion, reshoots, or just oversight, I think they bizarrely used English in a few scenes where Mandarin would make more sense (e.g. between two native Chinese characters). But a criticism like that is minor in the context of how much of the film is properly, lovingly dedicated to Mandarin.

The cultural influences and inspirations are HUGE, ranging from mythology to history to HK cinema to anime. In particular, I really loved the small glimpses of Asian-American life we get in the first act, but I was begging for so much more. Given how a superhero movie like this has literally never happened before, I was desperately looking for representation of not magical forests, not ninjas, not giant explosions, but just humans living as second-generation immigrants, learning to navigate the complexities of being Americans while also being the children of another culture. We get glimpses of their diasporic world, but the film very quickly cuts to the action and then never lets up. But I realize this is a personal expectations problem rather than a fault of the film, and hopefully, Ms. Marvel will satisfy this for me.

Overall Shang-Chi and the Legend of the Ten Rings is really good, but where Black Panther was like “Wow look how amazing this culture is, let’s embrace it!” I felt like Shang-Chi is more like “Here’s the culture we’re using, what can we pick and choose to make the coolest movie?” It was more like a carefully curated showcase than a heartfelt immersive experience, in my opinion. For comparison, I remember in Black Panther, I was just stunned through the credits. I was paralyzed and ecstatic at the same time. I absolutely loved it and I was just immobilized with joy and excitement and disbelief. But with Shang-Chi, I thought, “That was cool, okay.” There are some parts that are just AMAZING, but with the continual escalation, the amazement wears off by the end of the final fight. As awesome and bonkers as the finale is, it’s kind of just sensory overload, despite being totally logical and coherent. (No joke, it’s like Endgame, but BETTER.)

Furthermore, in spite of a couple of surface-level story similarities, Shang-Chi and Black Panther can’t truly be compared for their cultural representation. As a South Asian American, I can’t speak for all Asian Americans, especially the East Asians shown in Shang-Chi, and I definitely can’t speak for African Americans. But I think the Asian-American experience may be much muddier in the general entertainment culture, with much less exploration in mainstream media than the African-American experience. As a result, a movie like Black Panther might have an easier time isolating a few key ideas about their culture and focusing closely on making a few sharp points, whereas Shang-Chi chose to cast a broader net. It focuses less on analyzing the unique Asian experience in favor of the more general family drama we’ve already seen in Star Wars and Invincible.

Hollywood’s lack of familiarity with authentic Asian/Asian-American culture is precisely why things like Shang-Chi, Crazy Rich Asians, and Always Be My Maybe are so important. These early movies are at least opening the door for the conversation to finally start, and then we can see if mainstream cultural understanding can get somewhere meaningful in a couple of years. Even more devastatingly, South Asian Americans still haven’t had an exciting early moment like this, but I’m hoping Bassam Tariq’s Mogul Mowgli and Marvel’s Ms. Marvel can help get the process started.

Despite being so important, what makes these representation films so difficult is that we (the underrepresented) all live similar experiences in parallel and we don’t really notice the patterns of our lives until a bunch of us get together and compare childhoods and family stories to actually notice what consistent elements have made us different from everyone else. But even then, you need an insanely talented, privileged, and driven group of people to make a little movie about exploring such a seemingly “niche” experience, and then years of bigger and better iterations to finally get to some kind of revelational-yet-accessible piece of art that can truly encapsulate and relate our cultural experience for the full world audience.

Perfect or not, comparable to Black Panther or not, getting a huge film like Disney/Marvel’s Shang-Chi and the Legend of the Ten Rings is truly a watershed moment just by existing. Not only is it the first time Asian Americans have been seen worldwide as mainstream superheroes, but also it’s simply just the first time authentic immigrant-child Asian American stories have reached so many audiences around the world. Shang-Chi is a blessing for the world and our future, and we’re even luckier that it was so damn good. This conversation is only just beginning, and I can’t wait to see what comes next.