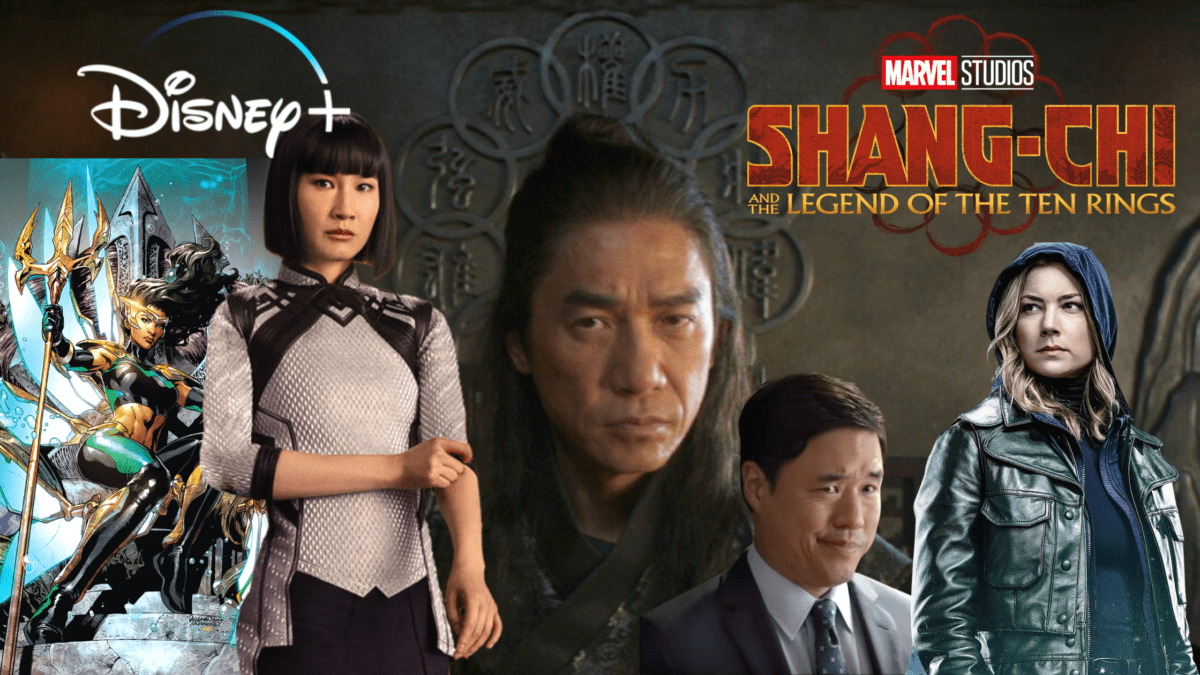 Audiences are loving Marvel’s newest Avenger! Shang-Chi and the Legend of the Ten Rings is dominating the box office all over the world and sequel ideas are already churning in everyone’s head. Sadly, any potential second installment is three to four years away at the earliest. However, I think there’s plenty of potential for the world of Shang-Chi to expand on Disney+ before then.

Here are a few pitches for what I’d like to see in the future of Shang-Chi’s world. Beware of spoilers for Shang-Chi and the Legend of the Ten Rings below!

The Rise of the Ten Rings 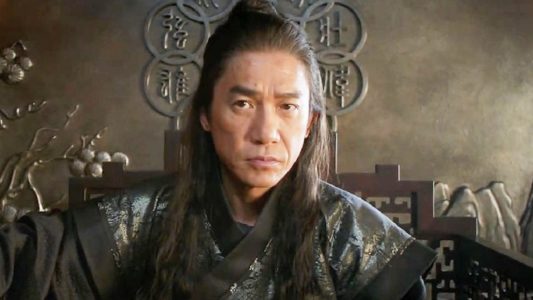 A 6-episode limited series focused on Tony Leung’s Xu Wenwu would be absolutely incredible. Leung brought Wenwu to life beautifully, creating a complex and layered antagonist who’s second to none in the MCU (except maybe the universe’s ultimate terrible dad, Thanos). While it may be hard for Marvel Studios to secure Leung’s return, a deep dive into what he did for those thousand years offscreen sounds like a lot of fun.

One of my slight gripes with Shang-Chi was that despite Kevin Feige’s comments about the Ten Rings organization, it was barely explored in the film. While the connections to Iron Man 3 were very welcome, I found it odd that nothing else about the Ten Rings was mentioned except for some generic “regime-toppling” comments in the opening flashback. The MCU wouldn’t exist without a Ten Rings cell kidnapping Tony Stark in the first place, not to mention their operatives appearing in Ant-Man and Daredevil. Disney+ would be the perfect place to flesh out Wenwu’s backstory even more and show us what exactly the Ten Rings have been up to in their hundreds of years of operation.

It could also set the stage for a Shang-Chi sequel, as the movie’s mid-credits scene teased the origin of the Rings themselves. While the answer doesn’t have to be given in the series, we could see how Wenwu obtained them in the first place and maybe explore different powers that we didn’t have time to see in the film.

As for Wenwu himself, Ying Li established only that he sought power relentlessly for his entire life. With this in mind, what if Ta Lo wasn’t the first mythical city he attempted to find? In a thousand years of existence, Wenwu could have easily heard about another magical dimension accessible through China: K’un-Lun, the home of the Iron Fist.

While I’ve already suggested a Shang-Chi / Iron Fist team-up for the sequel movie, what if Wenwu had met his match centuries earlier in the form of an ancient Iron Fist? Setting the series anywhere from the 1500s to the 1800s gives plenty of time for a previous Iron Fist to have come to blows with an immortal Chinese warrior wielding ten mystical rings. The series could position Wenwu as the protagonist without being a good guy, with the Iron Fist acting as his “villain.” Wenwu could have tried breaking into K’un-Lun but could never make it past the Iron Fist despite his best efforts.

These futile attempts to seek out more power and knowledge could have led him to obsess over stories of similar places, ultimately leading him to Ta Lo in 1996. Wenwu is one of the longest-lived characters in the MCU, yet he seems to have done very little besides start an evil underground society. A Disney+ limited series would be the perfect way to spend more time with this fascinating antagonist.

The Rebirth of the Ten Rings 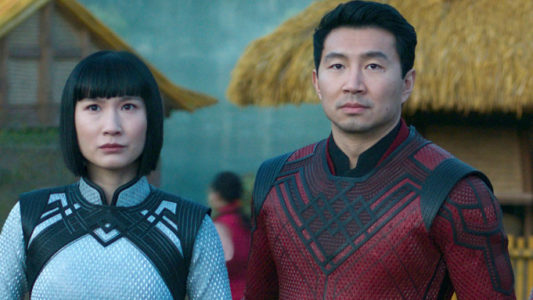 If Wenwu’s past won’t be explored on Disney+, his daughter’s future certainly should be. Xialing assumed control of her father’s empire in Shang-Chi’s second end-credits scene but her goals are still unknown. While she could reform the Ten Rings, Shang-Chi and his sisters have always come to blows in the comics. Instead of being a distinct enemy like Wenwu, Xialing could become a morally grey leader whose actions often put her at odds with her brother even if she’s not portrayed as a clear villain.

Xialing is the perfect character to get a Disney+ spinoff. She had her own arc in the film, and has been set up for a bigger role in the future. But she’ll always be the second fiddle to Shang-Chi in his films. On Disney+, Meng’er Zhang could shine as the Ten Rings move into place for their role in a sequel film.

Across six episodes, we could see Xialing train a new generation of warriors as she expands her underground fighting tournament. This could bring her into conflict with her father’s old enemies or even international agencies like MI6 and the CIA. While Xialing is certainly adept at running covert illegal operations, the end-credits scene also proved she has a certain flair that Wenwu was missing. Xialing’s dramatic style could leak into how her Ten Rings operatives run missions, calling undue attention to herself.

Attention from MI6 could tie into a potential Agents of Atlas project, but let’s hold that thought for a second. Any conflict with the CIA could easily bring Xialing into the wider MCU through two agents we all know: Martin Freeman’s Everett Ross and Emily VanCamp’s Sharon Carter. While Ross may be too busy over in Wakanda to worry about the Ten Rings, Sharon Carter was recently revealed to be running her own criminal operations in Asia. Although she may be back as Agent Carter, Sharon is still the Power Broker and holds a significant amount of power in Madripoor. Carter promised an associate access to all kinds of government goodies in the end-credits scene of The Falcon and the Winter Soldier. With Shang-Chi taking place mere months before Sharon’s pardon, could the Xialing’s Ten Rings already be in league with the Power Broker? That’s a team-up I’d love to see. 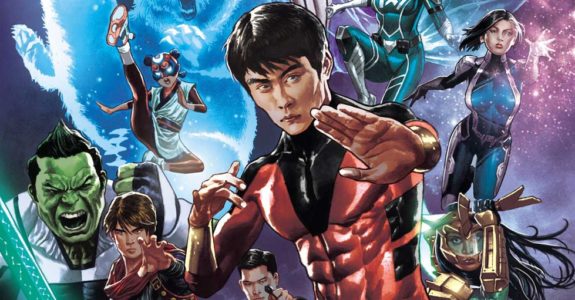 An Agents of Atlas project was reportedly in development as of February 2020, but who are they? The Agents of Atlas are a superhero team in Marvel comics that was revamped in 2019 to consist of Asian and Asian American superheroes. Shang-Chi, Silk, and Wave are some of the more popular heroes currently part of the team, which is led by Jimmy Woo. Randall Park has done a fantastic job portraying Woo in Ant-Man and the Wasp and WandaVision, and he’d be the perfect character to spearhead a new Disney+ series.

While Jimmy Woo isn’t a superhero, his appearances have provided a welcome source of comedic relief. Woo was given more responsibility in WandaVision, spearheading the FBI investigation in the aftermath of Wanda’s actions in Westview. Monica Rambeau told him that leadership looks good on him and I’m inclined to agree. Jimmy Woo leading a smaller-scale Asian superhero team would be great to see, and the plot could easily set up Shang-Chi 2.

Going back to my earlier MI6 comment, Agent Leiko Wu is a popular supporting character in Shang-Chi comics. She’s been one of Shang-Chi’s closest allies as well as a love interest for him. An Agents of Atlas series could bring her into contact with Jimmy as the FBI and MI6 operate a joint investigation into the Ten Rings’ criminal activities. This could also bring Xialing into the fold although the series wouldn’t be focused on her. The team could be rounded out with other agents as well as new superheroes like Wave, a Filipina hero capable of hydrokinesis. 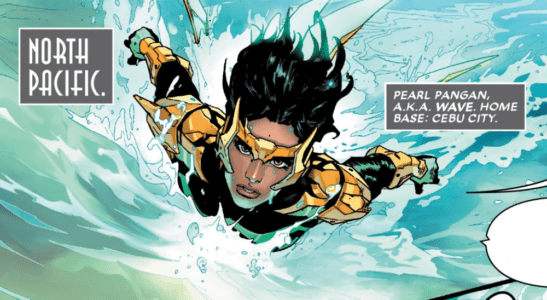 These new characters could then go on to appear in Shang-Chi 2 or other MCU properties. Also, as Sony’s Marvel movies tie closer into the MCU, it’s not impossible to imagine Silk making the jump from her own Amazon Prime Video streaming series to a Disney+ one. While the MCU’s Shang-Chi may be a little too busy with the Avengers to join the Agents of Atlas, he could still work with them in some capacity.

I hope to see the Shang-Chi franchise rapidly expand within the MCU, and since a sequel is years away, I think a 2023 Disney+ series is an absolute no-brainer. And if we can’t get an entire series about them, I hope the Ten Rings appear in projects like Armor Wars in the meantime!