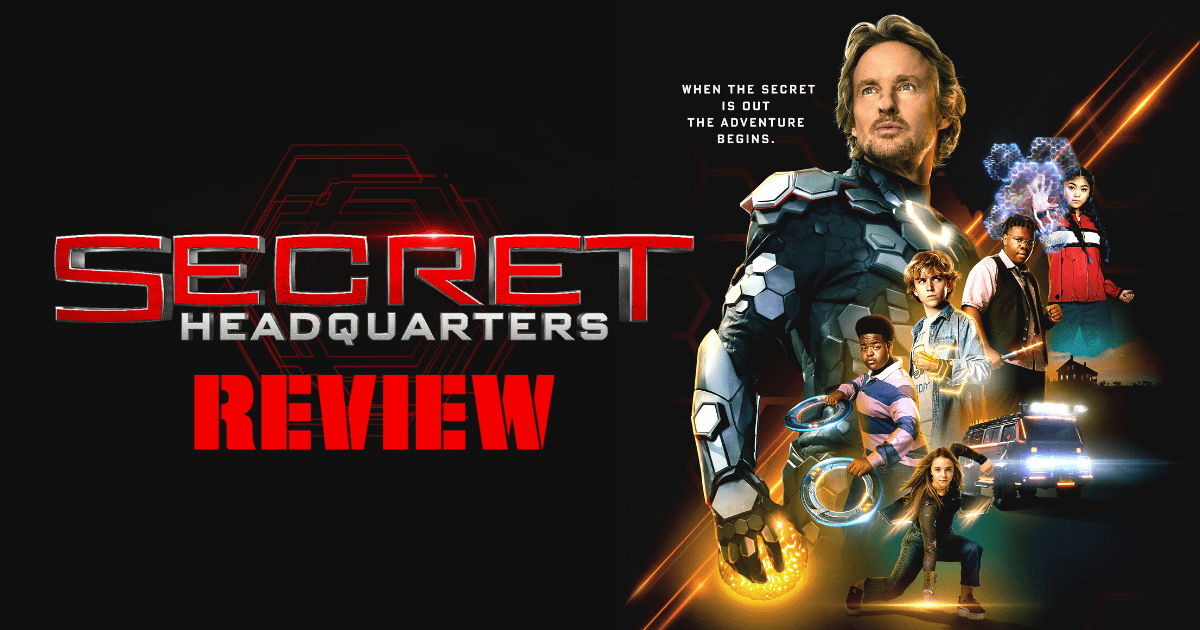 It’s been a busy summer for Jerry Bruckheimer. Not only did his Top Gun: Maverick film starring Tom Cruise dominate the box office, but the legendary producer was also responsible for Paramount+’s Secret Headquarters. Wait, what? If you evaluate them for what they are – the two films aren’t entirely different. Top: Gun Maverick is the pinnacle of action-adventure for adults, and Secret Headquarters is a solid action-adventure film geared at kids and families.

Secret Headquarters is engaging, entertaining, and earnest. It’s full of heart and hits the right notes as a family film. It’s an action-adventure with relatable characters going through very relatable problems with possibly world-changing stakes, and the ending is happy and emotionally satisfying.

[Warning: Spoilers from Paramount+’s Secret Headquarters are below]

The world of Secret Headquarters

Owen Wilson is top-billed as Jack and the dad in this film, but the young actors starring beside him really shine. Walker Scobell, a name that will surely become a household one as he assumes the mantle of Percy in the upcoming Disney+ show Percy Jackson and the Olympians, delivers a compelling performance as Charlie. Michael Peña channels Sam Rockwell’s Justin Hammer from the Marvel franchises as a believable villain, Argon. Jesse Williams is Irons, a downed pilot who serves as a secondary antagonist.

The movie also features Keith L. Williams as Berger, Momona Tamada as Maya, and Abby James Witherspoon as Lizzie. Charles Melton is the henchman Hawaii, and Kezii Curtis rounds out the cast as Berger’s brother, Big Mac. It was directed by Henry Joot and Ariel Schulman, the Catfish duo that know a bit about people and their double lives.

The movie’s premise is this: divorcee and flakey-dad Jack has a secret identity as the world-saving superhero, The Guard. He’s saved countless people around the globe and, as a result, hasn’t had much time for his family.

Charlie is his son and has a secret of his own – he wants his dad to pay attention to him, and it really hurts that he doesn’t. Dad’s missed out on school and sports – you name it. Their worlds collide when Jack flakes on his birthday weekend with Charlie because of a work emergency. Jack thinks he’s sending Charlie home, but Charlie stays at his dad’s place in an act of kid defiance. He discovers, along with some of his friends, that it’s the Secret Headquarters for The Guard, packed with funky and badass technology. And oh yeah, his dad is The Guard, too.

Argon is an evil defense contractor that wants the tech that powers The Guard for his nefarious purposes. He’s been tracking The Guard, unsuccessfully, trying to find the source. And when Charlie gets into the Secret Headquarters, they inadvertently light it up like a beacon and lead Argon right to it. Argon and crew show up, and action-packed hijinks ensue. The kids try to defeat the adults in a very Home Alone meets Spy Kids series of events.

Eventually, Jack comes home, and together with Charlie and his friends, they defeat Argon and his minions. Jack and Charlie’s relationship is ultimately repaired, and the two have a new understanding as father and son.

But wait, I just said that the characters are relatable and going through relatable problems? My role as a parent shapes my perspective on this movie. So read on to find out more. I’m going to highlight a few other things that really stood out for me while watching – including my thoughts on the best way to enjoy this movie, the dynamic between the actors Owen Wilson and Walker Scobell, some thoughts on Irons as a villain, and finally a review of some of the typical kid movie things that are included in the film.

This movie is probably not appropriate for very young children. There’s no blood, but there is violence, the threat of violence, and a whole lot of weaponry. There’s also some very mild crude language. However, compared to superhero films like those by DC and Marvel, the roughness is significantly less. While you’re probably not going to screen this movie at a PTO event, it’s still a good choice for a family movie night, especially if you have tweens. It’s entertaining and enjoyable without being too dark.

The parent-child relationship portrayed by Wilson and Scobell is so well done and shines in this movie. It’s complicated – Jack is a flakey dad to Charlie because he’s busy saving the world. He’s keeping secrets from Charlie and missing out on massively important life events. And Jack’s superhero job and its stresses led to the breakup of his marriage. Charlie is trying to make his way in the world and claims he has no expectations of his dad and that it doesn’t hurt him – but we see that it does, especially in conversations with Charlie’s best friend, Berger, played by Keith L. Williams. Wilson and Scobell slip into these roles and play them with believable vulnerability.

In praise of Jesse Williams and Irons as a villain

I want to highlight the writing behind the character of Captain Sean Irons, who Jesse Williams portrays because it’s so well done. Irons is one of the film’s villains – but he’s ultimately redeemed and winds up working with the film’s heroes. What sticks out about Irons is that he’s totally defensible as a villain. He’s not just a one-dimensional stereotypical mustache-twirling bad guy hell-bent on power.

Let me explain – he was with Wilson’s character at the start of his superhero days. When the alien ship crash landed, and there was a streak across the sky, Jack went to check it out. He found the ship and the downed pilot Irons who had collided with it. A powerful, seemingly sentient high-tech orb came out of the alien ship. It was looking for a host of some kind.

First up was Irons, who the orb rejected. But Jack passed the “test” and became the Guard. Understandably, Irons was a bit salty about that. Their lives diverged, and Jack escaped and went off to save the world as the Guard.

Meanwhile, Irons lost his career and was publicly ridiculed when he spoke out about what he saw and experienced. This is not unlike pilots who have spoken out about UFOS or whatever weird phenomena are the flavor of the day. Irons being mad and Argon using that anger to exploit him for his purposes is reasonable in that case. We relate to Irons as a villain and can understand his journey.

The about-face was even more exciting – and what must have been fun for the actor Williams to toy with. After finally achieving his goal of getting the orb and, therefore, the guardian power, Irons is enlightened. He has a vision of what the orb and the world need from him. Irons is a changed man and goes on to help Wilson’s Jack/Guard. Irons is redeemed, and it’s so satisfying to watch, especially when he turns on Peña’s slimy villain, Argon.

There are certain tropes in kids’ movies that have been done so many times and are kind of expected. In Secret Headquarters, we have a few fun little league scenes. There’s the before, pre-Guard tech, where Charlie is an abysmal player. But after the kids get the Guard tech, they use some of it for themselves. Charlie now has a souped-up arm and, as a pitcher, pitches a baseball straight through the glove of Berger. They’re a fun set of parallel scenes and totally fit in the kid movie genre. The fantastic pitching reminded me of Thomas Ian Nicholas in Rookie of the Year.

To sum it up, you won’t regret spending an hour and forty-five minutes of your time watching this fun movie. It’s fun, moves fast, and is full of funny moments and action. You can watch Secret Headquarters anytime you want now on Paramount+. It was released on August 12, 2022.

What did you think of the movie? Do you agree or disagree with the review? Please share your thoughts with us on Twitter @MyCosmicCircus. And if you haven’t already, check out my latest review on Apple TV’s Luck, a fun animated adventure for the entire family!