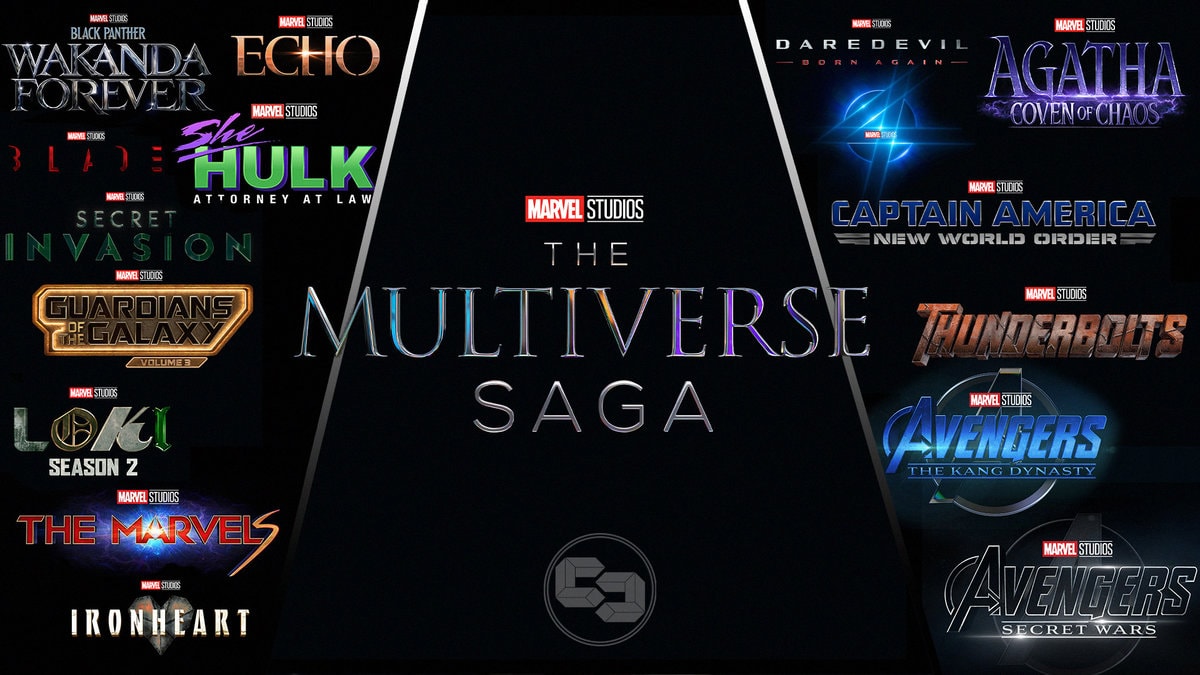 It feels like fans were holding their breath all day leading up to SDCC 2022 Marvel Studios Hall H presentation. I know I definitely have, because I wasn’t sure of what to expect. For a while, it didn’t seem like Marvel Studios was coming to SDCC, until about only a month ago banners for She-Hulk: Attorney at Law began popping up around the venue. And then fans really started getting excited!

Factor in D23, the Disney equivalent of Comic Con, being just around the corner, I expected to get only a few confirmations or new announcements at most. But Kevin Feige is never one to disappoint! Marvel Studios panel on Saturday was epic in every way, pushing the MCU in huge ways throughout phase six!

Sizzle reels and the end of Phase 4

The presentation started off a few minutes late, due to a fire alarm going off in Hall H, but it wasn’t long before a sizzle reel began rolling, narrated by the main Marvel man! No not Kevin Feige, but by the late Stan Lee! Featuring a cameo from time itself, the incredibly sassy and super intimidating Miss Minutes, voiced by Tara Strong.

As the sizzle reel came to a close, head honcho Kevin Feige walked onto the stage, signaling the beginning of a fast-paced hour of news and reveals! Addressing the films and shows still to come in 2022, Feige announced that Black Panther: Wakanda Forever is the end of Phase 4.

With just one film, She-Hulk: Attorney at Law, I am Groot, and the Halloween special (which still hasn’t been announced), another chapter of the MCU will come to a close. However, with each door that closes, another one opens…meaning that Phase five is almost here.

Feige wasted no time in giving me a heart attack as he began laying out phase five. Beginning with Ant-Man and the Wasp: Quantumania, eight projects will be gracing our screens before the end of 2023. Secret Invasion is coming in Spring with Guardians of the Galaxy Vol. 3 coming right behind it in May. Secret Invasion also unveiled a new design for its logo, the third iteration that has come since the project was announced.

Cobie Smulders was present, telling fans that the Samuel L. Jackson-led show was a darker project in the MCU…

Echo and Loki season two were both labeled as summer, perhaps mirroring the release of Ms. Marvel and She-Hulk: Attorney at Law. With the former releasing in June, so early summer, and She-Hulk in late summer. November 3 sees the arrival of the highly anticipated Blade, a project that was announced back in 2019 during the last presentation Marvel Studios did at SDCC. Hearing Mahershala Ali’s voice in that post-credit scene of Eternals also helped build excitement for this project. I for one cannot wait to see this film!

Rounding out the year are two Disney+ shows spinning out of other Marvel Studios projects. The first, coming in Fall 2023, is Ironheart, following the adventures of Riri Williams (Dominique Thorne), a genius girl who builds her own Iron Man-type suit.

Thorne will first appear as Riri in this year’s Black Panther: Wakanda Forever, with fans just recently getting a look at her Mark 1 suit through some mech leaks. Ironheart is currently filming!

Agatha: House of Harkness has been renamed Agatha Coven of Chaos and will premiere Winter 2023 on Disney+. #MarvelSDCC #SDCC2022 #MarvelStudios #Marvel pic.twitter.com/j1Q0YY6tRQ

Closing out the year and beginning 2024, is the spin-off of WandaVision, Agatha: Coven of Chaos starring Kathryn Hahn. The title itself featured a change from the one announced earlier in the year, switching out House of Harkness for the Coven of Chaos.

The new title seems to fit a bit better, with coven fitting witchcraft better in the MCU with a nod to Chaos magic, which is what Wanda Maximoff (Elizabeth Olsen) is master of. Not much is known about this project, but there’s no such thing as too much Agatha on my television screen.

Everything coming in 2023 was already publicly known, however, it was nice to finally lock down some dates or windows for release. Now, what is to come in 2024 provided some of the biggest shocks of the night!

Starting off the year something in spring is Daredevil: Born Again. Since Charlie Cox’s cameo in Spider-Man: No Way Home, fans have been scrambling for another outing for Daredevil!

Seemed only a matter of time until a new series came and Marvel Studios did not want to disappoint. Not only will fans get this new adaptation of Daredevil in the MCU, but the show will be supersized with 18 episodes! My jaw hit the floor when I heard the episode count. Returning along with Charlie Cox is Vincent D’Onofrio as Kingpin.

If you’re interested in reading about Daredevil in the comics but don’t know where to start, take a look at Vin’s guide to Daredevil comic books 1964-1998!

Coming in hot on May 3 is Captain America: New World Order, the fourth installment of the Captain America franchise. Starring Anthony Mackie and following the events of The Falcon and the Winter Soldier, not much is known about the film at this time. However, you can expect high-flying fun when the red, white, and blue shield is back in action.

Rounding out phase 5 is Thunderbolts, serving as the anti-Avengers of the MCU. Little is known about this project as well, but it seems highly likely that we will see the return of Baron Zemo (Daniel Brühl), Yelena Belova (Florence Pugh), and John Walker/US Agent (Wyatt Russell), along with Valentina Allegra de Fontaine (Julia Louis-Dreyfus).

Those present for Marvel Studios’ extravaganza were shown some first looks at upcoming projects! Footage from Ant-Man and the Wasp: Quantumania, with director Peyton Reed confirming a vast amount of the film, takes place inside the Quantum Realm.

First looks of Kang the Conquerer, played by Jonathan Majors, who asks “You’re an Avenger? Have I killed you before?” and MODOK was also shown, to much excitement of fans in the hall.

"You're an Avenger? Have I killed you before?"https://t.co/ryjDn1UtGj

James Gunn was also there to present some footage from Guardians of the Galaxy Volume 3, along with a new logo.

Gunn confirmed that the third film is “the end of that story. Some stories have an end. It doesn’t mean that everybody dies,” confirming that some characters may continue on, but Vol. 3 is truly the end of this iteration of the Guardians.

The trailer confirmed a focus on Rocket Racoon’s (Bradley Cooper) time as a child, along with a return by Gamora and the introduction of Will Poulter as Adam Warlock. As well, as confirmations of Maria Bakalova as the voice of Cosmo and Chukwudi Iwuji as the High Evolutionary (as we have previously reported).

Fans around the world were graced with a second trailer of the upcoming She-Hulk: Attorney at Law. The trailer gave us an even better look at Tatiana Maslany as Jennifer Walters as she learns to control her powers and balance her superhero life with her legal career.

The show definitely feels more mature than some of the previous Disney+ series. Fans also got confirmation of Charlie Cox’s return as Matt Murdock/Daredevil, with a glimpse of an updated Netflix Daredevil suit near the end of the trailer. Feige didn’t confirm how large of a role he will have in the show, but any appearance of “The Man Without Fear” is exciting!

Check out the trailer below!

Perhaps in the biggest shock of the evening, Kevin Feige turned heads toward Phase six, beginning with Fantastic Four on November 8 of 2024. No confirmation of the director or actors was given during this presentation. Not stopping there, Feige confirmed that audiences would get not one, but two Avengers movies in 2025.

Avengers: The Kang Dynasty is expected on May 2, with Avengers: Secret Wars closing out Phase 6 on November 7, 2025. The Marvel Studios head indicated that phases 4 through 6 will be titled The Multiverse Saga, with eight more projects coming in later in 2024 and 2025 to round out the second Saga of the MCU. If that didn’t give you chills, I don’t know what will!

The night concluded with a first look at Black Panther: Wakanda Forever, which began with a live musical performance. Director Ryan Coogler spoke about Wakanda Forever and Chadwick Boseman, which evoked emotional responses from many fans. He said that this sequel will go to places in Wakanda that audiences haven’t seen yet.

It was also confirmed that we will see the introduction of Namor the Submariner, played by Tenoch Huerta and that Michaela Coel is joining the film as Aneka.

A trailer was shown to those in attendance and released online shortly after. Watch it here!

Going into this presentation, I did not think we would get as much information about Marvel Studios’ plan for phases 5 and 6 as we did. The surprises and reveals that Marvel gave fans were so much more than anyone could have anticipated, leaving plenty for fans to chew on over the next couple of years.

Here are the official slates for #MarvelStudios' Phases 5 and 6

Marvel Studios looks far from slowing down, giving fans more and more of what they want. But what were your thoughts on Marvel Studio’s panel? Was there something you wished would have been announced? Or how about something announced that you weren’t expecting? Let us know over on Twitter!