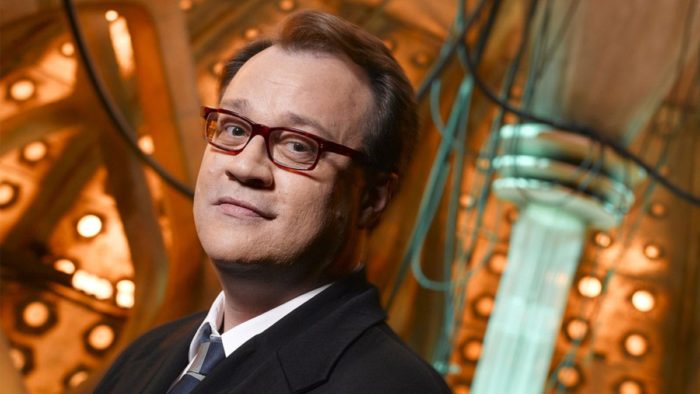 The adventures of Jodie Whittaker’s Thirteenth Doctor across time and space on Doctor Who will be coming to a close in 2022 along with Whittaker and current showrunner Chris Chibnall leaving (a pact that was set between them prior to their beginning on the show about time and space traveling).

While there is still plenty of stories left for Whittaker’s Doctor with a six-episode thirteenth series followed by three specials throughout the end of 2022, fans have been looking towards the future of the BBC staple.

We may not know who the next Doctor is quite yet, but we do know who will be taking over the keys of the blue police box next. And let’s just say that he is well acquainted with our favorite Timelord and the T.A.R.D.I.S. This is the kind of news that really gets both hearts pumping! Dare I say, Fantastic! Well, put on your best bowtie and Fez, because it was just announced today that Russell T. Davies will be returning to Doctor Who as showrunner in 2023!

Russell T Davies to return as Doctor Who Showrunner to celebrate the 60th anniversary in 2023, and series beyond. BBC Studios are partnering with Bad Wolf to produce.

Davies is set to return, beginning with the show’s 60th anniversary in the fall of 2023, a monumental occasion to celebrate such a long-running and impactful television show. The report from the BBC indicated that he will continue on with the show not just for the 60th year, but for “series beyond”.

It seems fitting to have him return for such a big year for the science fiction classic show, as he is the father of “NuWho.” Russell T. Davies helped usher in the revival of Doctor Who back onto the screen after it had sat in a hiatus following the 1996 made-for-tv movie garnered little success and made the distribution of the show very complicated.

He was pivotal in securing Christopher Eccleston in the portrayal of the Ninth Doctor and as we recall, his single-season led to accelerated regeneration of having David Tennant playing the Tenth.

While Davies initially left the show along in 2009 with Tennant, it seemed impossible that he would be gone for too long, seeing that he himself is a self-proclaimed fan and nerd of the program. Davies brought excitement and life back into a show that some believed to be stale and forgotten.

Davies’s Lasting Impact on Doctor Who

Davies created so many unforgettable characters during his initial tenure on Doctor Who, especially the companions who traveled with the Doctor. Billie Piper as Rose Tyler led the charge, returning many times since her departure as a full-time companion at the end of series two.

However, every companion left their mark on the show under Davies’s guide as showrunner. If fans are graced with characters even a fraction of spectacular as Martha Jones (Freema Agyeman) and Donna Noble (Catherine Tate), we are in for a treat.

As well, Davies developed spin-offs of Doctor Who, which gained as much popularity as the flagship show. Torchwood followed the adventures of Captain Jack Harkness (John Barrowman) as the head of a governmental agency investigating alien activity throughout Great Britain.

The Sarah Jane Adventures followed Elisabeth Sladen’s Sarah Jane (initially from the original Doctor Who) after her return on ‘NuWho’, which continued until the star’s untimely passing. With the return of Davies as showrunner, I look forward to possible returns of many of these characters, especially in the 60th-anniversary special, as well as any new spinoffs he develops as he expands the Doctor Who brand once more.

After passing the show along to Stephen Moffat, Davies went on to showrunner and write other hugely successful series such as Years and Years, Cucumber, Banana, and Tofu. Each show serves as a testament to the passion and dedication that he brings to every project he’s involved with.

While we don’t know where the adventures of the Doctor and his companions will go in the next two years, it’s comforting to know that the show’s future is in good hands. But what do you think? Excited to see Russell T. Davies back as the showrunner of Doctor Who, or would you have rather seen someone else take up the helm? As always follow us on Twitter at @mycosmiccircus and let’s continue the conversation!