Review ‘Weird: The Al Yankovic Story’ – Weird Fun for All 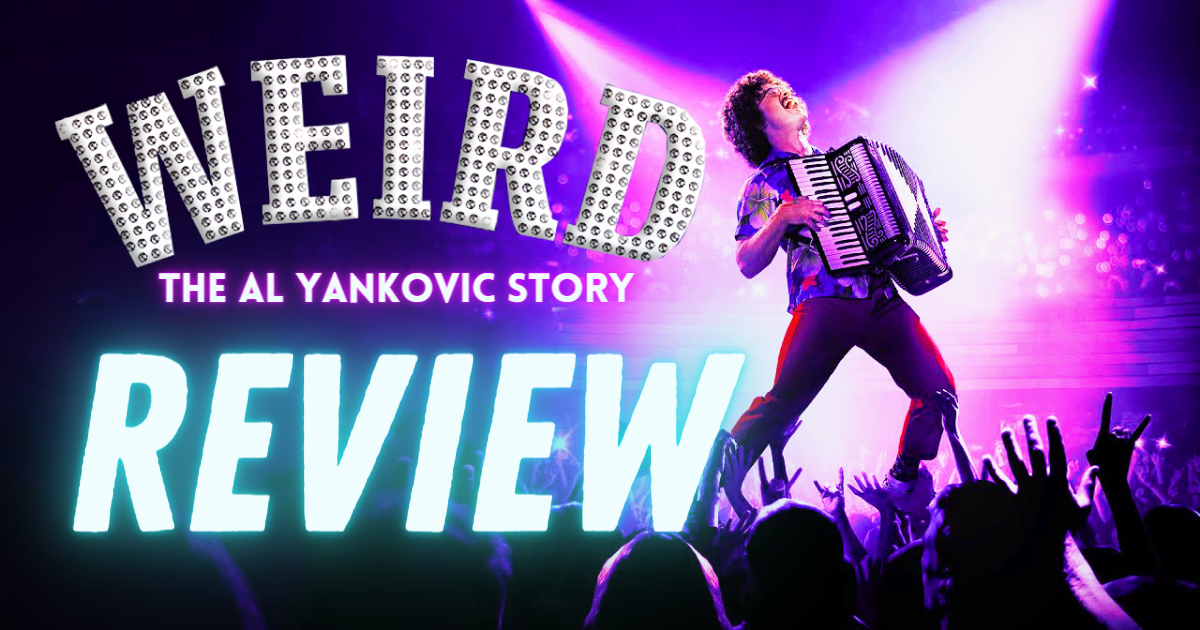 Review ‘Weird: The Al Yankovic Story’ – Weird Fun for All

Weird: The Al Yankovic Story is a very weird film like Al Yankovic himself. Before you watch it, don’t expect a 1:1 recount of Yankovic’s life, even if it’s “based on true events.” Rather Weird is a fun, crazy, and in some ways revolutionary story. Keep in mind also that (as far as we know) many of the things shown in the film, such as Al and Madonna dating, Al drinking and taking drugs, or putting out a cigarette on a guy’s hand never happened. But the way Yankovic came up with his song parodies is bizarre enough, in any case.

[Warning: Spoilers from Weird: The Al Yankovic Story below!]

Weird Al Yankovic is a strange but often very positive musician, who is the complete opposite of the person we see in this parody. It’s not treated as a biopic or a serious film, but as a parody that mixes all film genres just to have fun, and it works really well.

Yankovic chose Daniel Radcliffe to play him because he considered Radcliffe the strangest choice for the role, which seems “weirdly” appropriate for the role. The film was shot in just 18 days. Surprising, because it’s uncommon for such a big movie to be shot in such a short time.

The first act of the film shows us the moment he got his first accordion, how he was arrested for attending a polka party, his difficult relationship with his father (Toby Huss), and showcases some of the talents Yankovic possesses. The film then jumps to the moment when he moved out of his parent’s house, moved in with friends, and formed a band.

Once Al came up with the idea to parody The Knack’s “My Sharona” and rename it “My Bologna”, and it became a radio hit, they decided to play these parodies in small clubs. Wherever they went, people cheered for their music. After one successful performance, Yankovic met quirky yet legendary radio show host Dr. Demento (real name Barret Hansen), played by Rainn Wilson in the film. He soon became Yankovic’s new manager and gave him the nickname “Weird Al” Yankovic.

At this point, Al’s real adventure in show business begins, as he meets radio icon Wolfman Jack (Jack Black), John Deacon (David Dastmalchian) of Queen, Andy Warhol (Conan O’Brien), and even Salvador Dali (Emo Philips). This film is full of many celebrity cameos that provide hilarious puns for the strangeness of the story. Lin-Manuel Miranda, Patton Oswalt, Seth Green, and the real “Weird Al” make guest appearances throughout the film in some seriously funny bits.

Weird also features a fictional affair between Al and Madonna (Evan Rachel Wood), which is the beginning of Al’s mental breakdown and the moment when he decides to create only original things. Yankovic was “reborn” as a man who will no longer parody popular songs, but a man who can create his own hits. In the long run, it helped him, but not how he would have liked. He realizes what a bad influence Madonna was, who only wanted to use him for his “Yankovic Bump.”

A weirder story than you think

I found the first two-thirds of the film to be pretty standard fare, however, the entire third act is where this film gets truly weird. The finale is action-packed, comedic, and bizarre. This part of the story is meant to further confuse the audience, letting them know that the whole movie is just a strange parody centered on biopics and one of the weirdest musicians of our time.

After Al becomes famous, there are snippets from TV that Pablo Escobar (Arturo Castro) wants Yankovic to perform parody songs for his birthday in Colombia. In the third act, he kidnaps Madonna to force Al to come there, but Al starts killing every person in his cartel. After this Madonna becomes the head of a drug lord underworld who wants to kill Al for ending their relationship.

Al then returns to his family home to work at The Fabric (a business that is never elaborated on in the film) with his father, who surprisingly becomes supportive of him. We learned that he’s an Amish man who was banished from his society for being guilty of owning an accordion. While going through his father’s things, Al finds the lyrics to a song about the Amish, and that’s how a 1990s classic called “Amish Paradise” came to be – according to Weird: The Al Yankovic Story, anyway.

At the Grammy Awards Yankovic wins by beating Michael Jackson, whom he hates. Madonna kills Al during his acceptance speech in revenge for everything he did to her. It’s a very uncanny way to end this parody, but the film ends with Madonna putting flowers on Al’s grave, and then, well… if you’ve watched certain horror movies, you might be able to guess what happens next.

Weird: The Al Yankovic Story is among the better biopics about musicians

In recent years, a number of biographies about musicians, some good and some bad, but Weird: The Al Yankovic Story is definitely in the better half of these films. It’s clear that the producers, director Eric Appel, who wrote the script along with Yankovic and the cast, wanted to create something different that wasn’t meant to be an ordinary story or film, but rather a comedy with a large dose of humor.

Watching the film, we can hear many well-known songs from Weird Al’s repertoire like “Eat It”, “Like a Surgeon”, “Another One Rides the Bus”, “I Love Rocky Road” and the aforementioned “My Bologna” and “Amish Paradise”. This parody is both a tribute to “Weird Al” Yankovic’s work and the weirdness that went along with it.

The main and also beautiful message of this film is summed up well in the film. Yankovic says, “Live the life you wanna live. You know, be as weird as you want. Believe me, you will never find true happiness until you can truly accept who you are“. This is one of the reasons to watch this film, not for its weirdness or the comedy, but because it’s a story about accepting who you are and embracing your true self.

It’s certainly one of the strangest films I’ve ever seen in my life. I had a great time watching it, full of laughs, shocking moments, and weirdness. There are also quite a few references to well-known movies and scenes from them that were turned into part of Al’s life here, so a keen eye can have a good laugh while dealing with this mix of oddities.

Weird: The Al Yankovic Story is currently streaming on The Roku Channel. Have you seen it? Let us know your thoughts on our Discord or social media! And if you haven’t already, check out Vin’s review for Wendell & Wild!