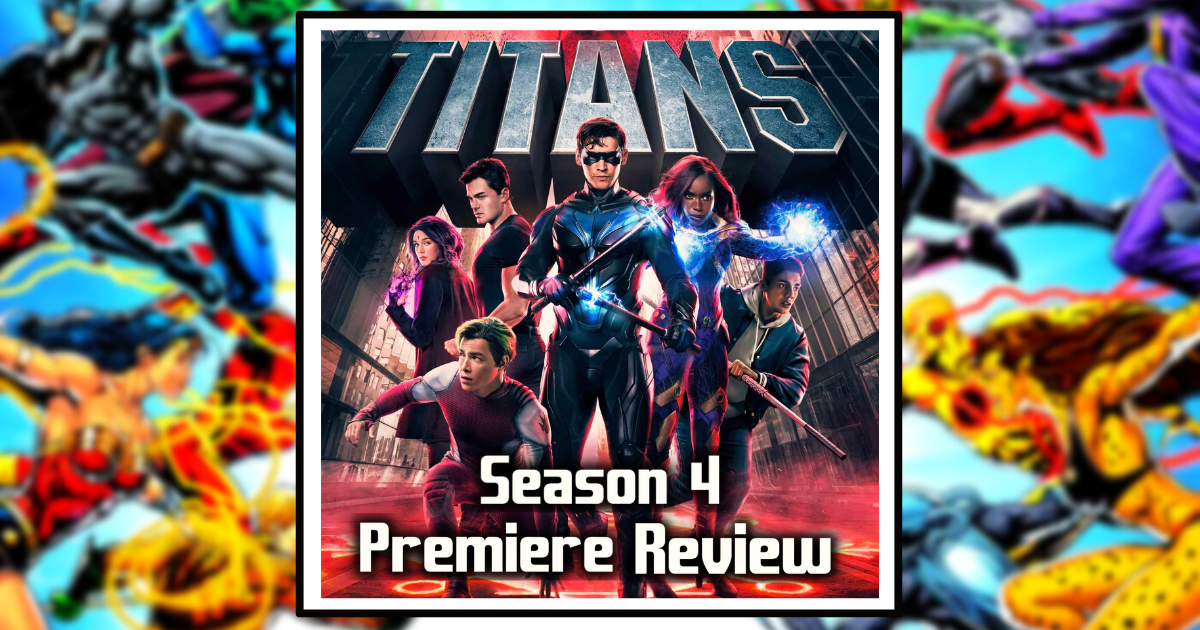 Spooky season is finally coming to an end with Halloween officially here, but the season of giving is just around the corner. November brings with it Thanksgiving for those in America, discounted Halloween chocolate in every store, and for fans of HBO Max’s Titans, part one of a brand new season. November third sees the drop of two new episodes for the Titans season four premiere, picking up just after the closing moments of the season three finale.

Initially, I was not that excited about the coming project, with mixed feelings about the first three seasons. However, after all the coverage, Ayla Ruby had for the series at New York Comic Con, as well as the first look we received for the new season during its panel, my excitement for this new adventure skyrocketed. Especially after hearing the involvement, the actors had in the process of this season (such as Ryan Potter and Joshua Oprin having greater say in their character’s trajectory) it felt like there was new energy behind Titans. So did that energy provided by the stars and showrunner during their panel and interviews translate to screen? Jump into the Titan mobile and let’s discuss my initial impressions of the Titans season 4 premiere.

[Warning: Light spoilers from the upcoming Titans season premiere are below! Read at your own risk.]

A new beginning in Titans season 4

The way the third season ended left infinite possibilities about what was next for the Titans’ team. After the darker, gritter story of their time in Gotham, Dick Grayson (Brenton Thwaites), a.k.a. Nightwing, acquired an RV and was ready to drive the team back to San Fransico, with good intentions of returning home.

However, attempting to have some fun, as well as give Connor (Joshua Orpin) a gigantic surprise, the Titans make a detour to Metropolis. Metropolis is the complete foil of Gotham. Where Gotham is dark and full of terror, Metropolis is a shining example of what a large city can be.

Matching the switch from the gritty Gotham to the light and hopeful Metropolis, the energy of the Titans has changed as well. From the moment we meet the team once again, playing a round of bowling no less, there is a happier, more energetic mood to them. There’s laughing between the friends, something I don’t remember much from the first three seasons.

This new lighter take on the team feels more in line with both versions of the Teen Titans cartoons. It finally feels like the entire show has finally found its stride, with a better understanding of what makes this team so special. The light-hearted camaraderie in this team-turned-family is the essence that was missing from the earlier seasons. I hope this continues throughout the entire season.

A darker story full of color

What’s interesting about this season so far is the dichotomy of what viewers are getting. The team might be having fun after the tragic story in season three, however, the overall story of season four is quite dark. This season is really tapping into the supernatural and horror elements of the DC universe, with the introduction of Mother Mayhem (Franka Potente) and Brother Blood (Joseph Morgan). There are quite a few moments in the first two episodes that caused chills or made me jump, feeling more like a suspenseful horror movie than the other seasons.

That being said, the season is full of color, especially within the horror elements. The amount of blood that is in these first two episodes is astounding, however, it plays into the colorful aspect of Titans season four rather well. It’s bright red against dark backgrounds, giving the show a deeper contrast and highlighting the beauty in the horror.

In some ways it makes it scarier, romanticizing the spookier aspects of the darker tale this season. There’s also more shining, glowing, magic, with lots of bright purples and reds, which I believe will continue to be in play as we learn more about the villains and their truest intentions.

There’s a bigger emphasis on color in other aspects as well, such as the rich purple of Raven’s (Teagan Croft) powers. It definitely seemed like they amped up the purplish tones, bringing new life to the character.

Even Gar (Ryan Potter) is shown more with his bright green complexion, embracing a look closer to his comic book counterpart. It feels like those involved in the making of this season are embracing the comic roots, which are full of color even if the story is dark.

As stated above, the tone and color of the season are a vast improvement over the past seasons, which makes the journey so far in season four that much more enjoyable. The writing has improved, with the use of fewer F-bombs, and instead has more colorful dialogue.

The light-hearted side provided more funny bits and jokes, which lead to me laughing quite a bit throughout the first two episodes. Paired with the moments where the chills created goosebumps down my body and it seems that Titans has finally found the balance between fun and an adult superhero show.

The story itself is exciting to watch, with a shift in focus towards a few more personal stories, sprinkled throughout the larger mystery. The writers waste no time setting up Gar’s journey of self-discovery, through some mysterious and unfortunate events. They also jump right into Connor’s exploration of his parentage, which actually kicks off the main story.

It’s nice to shift away from Dick and his problems a bit, with the first three seasons seeming to focus specifically on him. It also refocuses on the fact that this is a show with an ensemble cast, so it’s best to let everyone have a moment in the sun. With this refocus, it feels like there is a more direct plan for the story, unlike season three which was messy and at times difficult to follow.

The introduction of Lex Luthor, played by Titus Welliver, coincides with Connor’s personal story. Welliver is excellent as Lex, with a bone-chilling performance as a mastermind who is always five steps ahead. It seems unclear how big of a part Lex will actually play in the story, but with just the bit of Welliver’s performance we see in the first two episodes, I hope there is more of Lex Luthor in Titans’ future.

Joseph Morgan is also fantastic as Brother Blood, however, his character is shrouded in a lot of mystery. It’s unclear for most of the first two episodes what is going on with him, although some clever editing and flashes provide a sense of unease surrounding his character. Morgan’s performance reminded me a bit of the duality of Clark Kent/Superman, that is if Clark was unknowingly a villain and terrified by that thought.

The Titans themselves are all fantastic this season, though it’s unclear if that is because of just the writing or if the cast is more at ease with each other. They truly act and feel like a family, where one moment they can be ribbing each other and the next they’ll go to the ends of the Earth to protect their family. I look forward to seeing what else comes from them.

This season isn’t for everyone because of how heavily it leans into horror. There were a few scenes that made me uncomfortable, one that sticks in my mind in the second episode towards the end.

While I enjoy horror films and shows, those fans who enjoyed watching to this point, however, don’t like lots of blood and a few jump scares may find themselves turned off from it. I think that’s why it’s so important that a new balance was struck up between the horror and the levity for the sake of not feeling so weighed down.

This season of Titans is off to a great start for a stronger season than we’ve previously had. The show finally embraced the ridiculousness of the source material, with a healthy dose of Teen Titans Go!’s humor in the heroes’ interactions with each other.

I thoroughly enjoyed the horror elements as well, even if there were a few moments I had to watch through squinted eyes. I think season four of Titans is definitely worth the time to watch and enjoy, especially if you were thinking of dropping off after last season.

Titans season 4 premieres with two episodes on November 3 on HBO Max. Do you plan on tuning in? Let me know on Twitter @kitson301 and follow The Cosmic Circus @mycosmiccircus. And if you haven’t already, check out Ayla Ruby’s round table interview with the showrunner of Titans, Greg Walker, from this year’s NYCC!