Review: ‘The School For Good and Evil’ 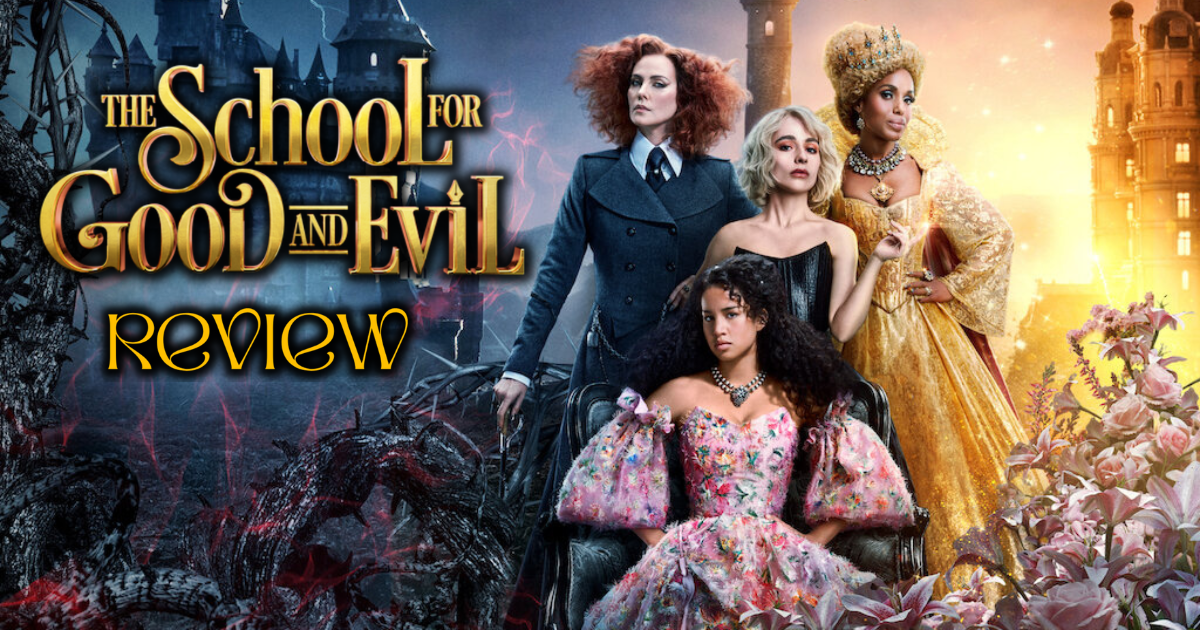 Review: ‘The School For Good and Evil’

With the way media is consumed nowadays, it feels almost impossible to go into a film completely blind. However, with Netflix’s newest fantasy film The School For Good and Evil, I truly went into it without any idea or preconceived notions about what to expect.

Directed by Paul Feig, there was a chance this film could go one of two ways. Feig is rather divisive with his films, with ones like Bridesmaids, Spy, and A Simple Favor being some of my favorites. and 2016’s Ghostbusters starring Melissa McCarthy and Kristen Wiig on the other end of the spectrum. However, with a cast consisting of Charlize Theron, Kerry Washington, Laurence Fishburne, and Michelle Yeoh, it seemed that The School For Good and Evil had all the makings of a fantastic film.

[Warning: Spoilers from Netflix’s The School For Good and Evil are below]

A story about balance in The School For Good and Evil

With voice-over narration, the film opens with a flashback to two brothers attempting to bring harmony to the world. One brother represents Good, which later in the film is the side of Princesses who exhibit light magic, and the other Evil, with witches and dark magic. Both must exist equally, for balance is required for the world to continue the way it was meant to be.

There must also be conflict at some points, to help represent the struggle between the two forces and the ability for both to co-exist. Naturally, this means that the two brothers must fight each other periodically in an epic sword fight, with the clash ending in a draw. Each brother can then walk away knowing the world is once again in balance.

However, this time the fight is different. The brother who represents Evil is through with balancing out Good, instead, he wants to win and he has new forbidden blood magic backing him up. Looking to be outmatched, Good still wins, and the Evil brother ends up pancaked at the bottom of a cliff.

A sisterly bond in this tale as old as time

The School For Good and Evil picks up the narrative by introducing audiences to the two main characters and their life situations. Agatha, played by Sofia Wylie, and Sophie, played by Sophia Anne Caruso, are best friends living in a small village full of normal people, which exists in a world of magic.

Sophie is established as the “pretty” friend, the one who has gorgeous hair and dreams of being a princess. However, she comes from a poor family who can barely put food on the table, let alone provide the life she wants for herself. Instead, she reads books about princesses and daydreams about the life she can never have.

Agatha on the other hand is the “scary” friend, wearing lots of black with untamed hair and a permanent scowl. She’s picked on by ruthless other children, who call her a witch and treat her as such. She’s fiercely loyal to her friends and family, which is just one of her greatest assets. She doesn’t seem bothered by the other children and townspeople disliking her, but also seems appreciative of Sophie and the companion she provides.

The first of a series of tests between Agatha and Sophie happens with Sophie learns that The School For Good and Evil is real and not just something that exists in fairy tales. Determined to get her happy ending, Sophie seeks out the school, against the wishes and warnings of Agatha. The two girls get whisked away to the school but soon believe something to be wrong.

Agatha is dropped off at the Good side of the school, destined to become a princess and force of good, while Sophie is flung into mucky water at the entrance to the Evil side. Both girls believe this to be a mistake, although Agatha is just looking to get home to her mother and not stay at the school at all.

Loyalties are tested as each girl learns more about themselves and the forces at play in the school. For there is a bigger picture and it seems to hinge on Sophie’s embrace of the dark side.

Right off the bat, I can say that this film isn’t for everyone. There will be many people who will watch it and think the drama and problems feel a bit teenage or delinquent. I can’t argue that this film is skewed majorly toward the 12-18 bracket. It was a Disney movie with a Disney message but aged up a bit and with a Netflix spin. For that reason alone, it may not be for you, however, the film itself has so much going for it, that its aim for a younger target audience should be forgiven.

Also, seeing that this film is an adaptation of the book, it seems like they had to condense bits and pieces here and there. The School For Good and Evil was still a cohesive story, but there were times that some things felt underdeveloped for lack of time, such as the friends of Sophie in the school of Evil. However, with more films hopefully on the way, there may be more time to explore what is next for all the characters and for the balance of good and evil.

The action in this film has a good mixture of hand-to-hand combat, sword fighting, and magic duels, some scenes included a bit of each. At times the action was reminiscent of old-school Matrix, especially the first fight between the brothers and the final battle. There were plenty of moments during the action when I was amazed at how it looked and found it exciting.

The use of color in this film was also extraordinary and vibrant. It wasn’t just one color either, every color shone magnificently in the film. Yellow, blue, green, purple, and even red and black all brought something new and interesting to the film, creating even more life into this already excellent film.

Stars to watch in The School for Good and Evil

Charlize Theron, Kerry Washington, Michelle Yeoh, and Laurence Fishburne may be the established actors used to draw people in, however, the real talent was in the actresses behind Agatha and Sophie. Sophia Anne Caruso is known for her role as Lydia in Broadway’s Beetlejuice, a role originated by Winona Ryder in the film. The role of Sophie wasn’t far off from the dark and twisted Lydia, however, Caruso brought the wicked tenfold for The School For Good and Evil. She balanced the lost girl who wanted to fit in with the darkness already residing in her so well. It was a treat to see her unfold on screen.

While I may be familiar with Sofia Wylie, I’m sure she’s probably a newer name for a lot of people. Wylie had starred in High School Musical: The Musical: The Series for three seasons as Gina, but was really able to step into her own in this film. Her acting skills are impressive, which filled the film with so much heart. She also plays a balancing act, as a girl who never fits in, whether it be with the nonmagical individuals or in the School for Good. Although in the school she stands out for how good she truly is. Wylie played the part well and I believe this film will put her on many people’s radars as someone to watch.

I also loved that this film, in a similar way to Frozen, wasn’t about true love between a prince and a princess, even though they spend quite a bit of time pushing that notion. Instead, it was the love between these two friends, who were really more like sisters. That was the love that saved the day, not the true love’s kiss of a prince to a helpless princess. These two girls were full of courage, tenacity, and love for one another which was stronger than the forces of Good and Evil.

Final Thoughts on The School For Good and Evil

This film easily shot up to being one of my favorites for the year. It’s a film that you can watch with the entire family because it has something for everyone. Action, romance, magic, what more could you need? The acting is fantastic, the story is enjoyable, and it’s set up for so much for when another film hopefully comes. If you are looking for a great escape for a few hours, I highly recommend you check out The School For Good and Evil.

The School For Good and Evil is currently streaming on Netflix. Have you watched it yet? What are your thoughts on it? And if you haven’t already, check out Drew Reed’s review for The Lord of the Rings: the Rings of Power season one!

Review: The Lord of the Rings: The Rings of Power Season 1