The Stargirl season 3 premiere is finally here, however, as a show, Stargirl has had such an interesting history leading to the third season on The CW. Originally produced for the now-defunct DC streaming service DC Universe, the transition to its new home on The CW began within the first season. As episodes aired on DC Universe, they would also air on the station, which at first felt like a way for Warner Brothers to drum up excitement for the streaming service. Just a few weeks after the conclusion of Stargirl’s first season, a second season was announced with a new permanent residence at The CW.

That was perhaps the first big shift for this show, but certainly not the last. As Stargirl began its second season, it was glaringly apparent that the tone had shifted. The first season was a light, fun, show that followed Courtney Whitmore (Brec Bassinger) learning her powers as well as finding herself. It was a show about mothers, daughters, fathers, and a family coming together.

Season two took a turn for the dark, fitting more in line with some of the other CW staples like The Vampire Diaries. It still had some light and fun parts, but it was more intense. Now that we are entering our third season, Stargirl is changing once again, in both structure and tone. So are these changes for the better, or does the shift leave me craving more? Let’s explore what Stargirl’s season 3 premiere has in store for viewers.

[Warning: Spoilers from the premiere of Stargirl season 3 are below!]

Regardless of the name for the premiere, which is titled “The Murder,” Stargirl has once again focused on a lighter story for Courtney. The season picks up a few weeks after the season two finale, as life in Blue Valley begins to settle into a new school year. Heroes and reformed villains seem to be cohabitating with varying success, with some reformed villains like Cindy Burman (Meg Delacy) wishing to become a part of the Justice Society. However, as the school year begins, the need for a Justice Society seems to be waning.

Life for all intents and purposes seems perfect for Blue Valley and for most of the first part of the season it stays that way. The biggest struggle that the Justice Society faces is whether to allow some of these villains to join their ranks, which is an issue that completely divides the group.

While Courtney and Beth (Anjelika Washington) seem to be in favor of giving Cindy and Artemis (Joy Osmanski) a second chance, Rick (Cameron Gellman) and Yolanda (Yvette Monreal) are against their admission to the group. Yolanda specifically is venomously against the proposal, specifically for Cindy.

This conflict is at the core of not just the premiere episode, but for the first six episodes (provided to us as early screeners). Cindy is trying her hardest to prove that she is good and not a villain like her father, however, is constantly treated like a villain by the group. Sometimes it’s not on purpose, with the group leaving her out of meetings and such. Although with Yolanda, her vendetta against Cindy puts them at odds so many times it almost becomes exhausting.

Starman and a looming murder

Another huge change for season three is that there isn’t just one person using the cosmic staff, but two. Sylvester Pemberton/Starman, played by Joel McHale, is a huge presence in the Whitmore/Dugan household, which changes the dynamics of the family immensely. He immediately takes on the role of leader of the group, which creates tension with Pat (Luke Wilson) and Courtney, even if it’s never talked about.

Courtney and Pat’s relationship during the first two seasons is the driving force of the Justice Society. They work together, with Pat being the mature adult who leads with reason and Courtney being the second in command but the leader in the field.

With Sylvester back in the mix, Pat is forced into a sidekick position once again by the hero. It hurt more than maybe it should have to see Pat, someone who is fantastic at leading the young heroes of Blue Valley pushed into a role that he hates. Although it does lead to some great growth on Pat’s behalf as he pushes back against the role placed upon him by Starman.

Sylvester’s return also puts Courtney in an odd predicament, as the current welder of the cosmic staff and its previous owner is living under the same roof. How this balance of power is worked out is tedious at best and I find it hard to believe that it’ll last for too long.

The premiere episode is titled “The Murder”, which doesn’t come to light until the final moments and is also the mystery that carries the first half of this season. This mystery plays out similarly to one in Scooby Doo, at least that is what it reminded me of. The Justice Society becomes the Scooby Gang which must solve the mystery and bring peace once again to Blue Valley. This felt like a tonal shift for the show, turning the season into a slow burn. The group slowly peels back the layers, as loyalties are tested. The last few minutes of episode one caused me to audibly gasp and I’ll bet that you will too.

The good and the bad of Stargirl season 3

For me, I loved the switch back to a lighter version of Stargirl. This season still has plenty of action and suspense, but the horror element that was common with season two is gone. It definitely felt a bit more like a CW show, with a bigger focus on the teenage aspects of these characters’ lives. As well, with the season being more of a slow-burn mystery there is less of a focus on action and fighting, but that isn’t to say there isn’t action in the series. However, the action sequences we do get, which are top-notch as always, are fewer and farther than in seasons one and two.

The Yolanda/Cindy drama felt a bit tiresome and childish, again playing into the teenage drama that is common with The CW. This storyline is featured heavily in this season and after a while, I was over it. However, I’ve only seen the first six episodes, and I believe there is still plenty of time for this season to turn it around, which I have total faith they can and will.

Brec Bassinger and Luke Wilson continue to be some of the best parts of this show, with the Courtney and Pat relationship being one of the best and most important relationships in Stargirl. Independently these two actors are exceptional, but the rawness and love that they put into the father-daughter relationship is exceptional and not something I see terribly often on television series nowadays. Their relationship has always been one of the biggest reasons I tuned in and that continues to remain true.

“The Murder” is a strong opener for this season and sets the tone for the rest of the season. I found myself laughing quite a few times, as the comedy in this series remains at an all-time high. The Whitmore/Dugan family is as strong as ever, with the entire family now involved in the heroics, which felt enduring in so many ways.

Once again, Stargirl feels more like a family-friendly superhero show similar in style to season one. If you haven’t yet watched Stargirl or stopped watching during the first or second season, now is the perfect time to pick it back up and join in on one of the most fun superhero shows currently on air.

Looking towards episode two, the game of Clue really starts, as the Justice Society begins to explore the motives and reasoning surrounding the murder. Fans of the board game should have some fun attempting to solve the murder faster than those in the show.

The dynamics between Sylvester, Pat, and Courtney really come into play as the trio begins to develop a new system for leading the JSA. In addition, Amy Smart has some excellent scenes in this upcoming episode, which explore her job and the friends she has in Blue Valley. Many of her scenes left me laughing so hard that I had a stitch in my side.

Stargirl airs Wednesdays only on The CW. Have you watched the premiere yet? Let us know on social media. If you need a refresher on season two of Stargirl, check out my review from last year’s finale. 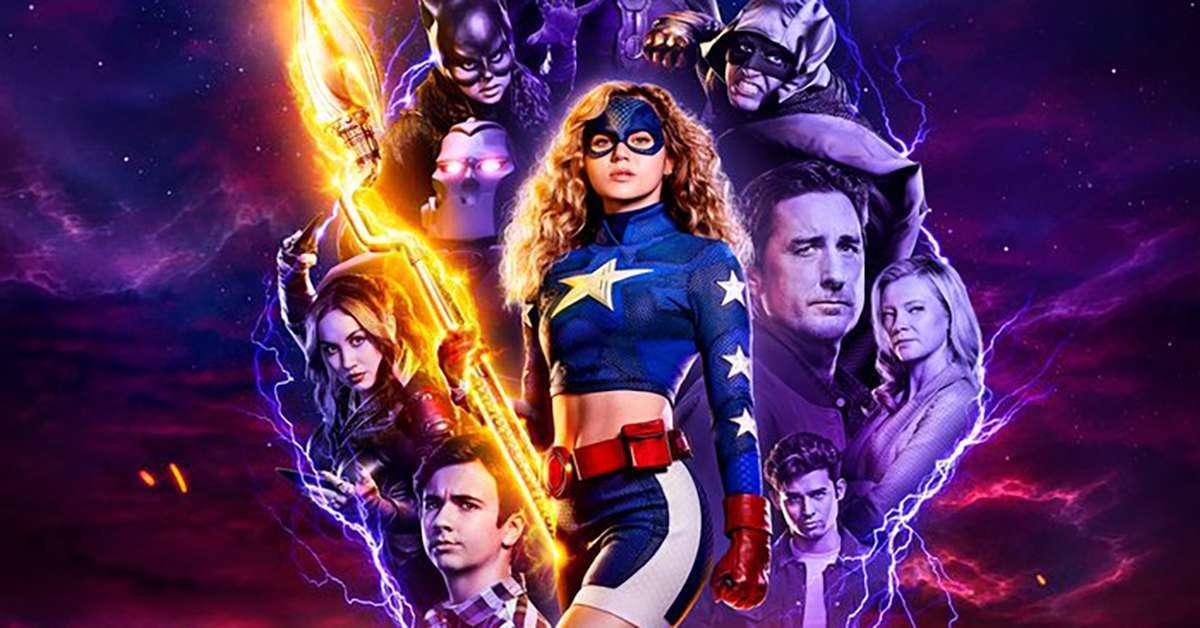