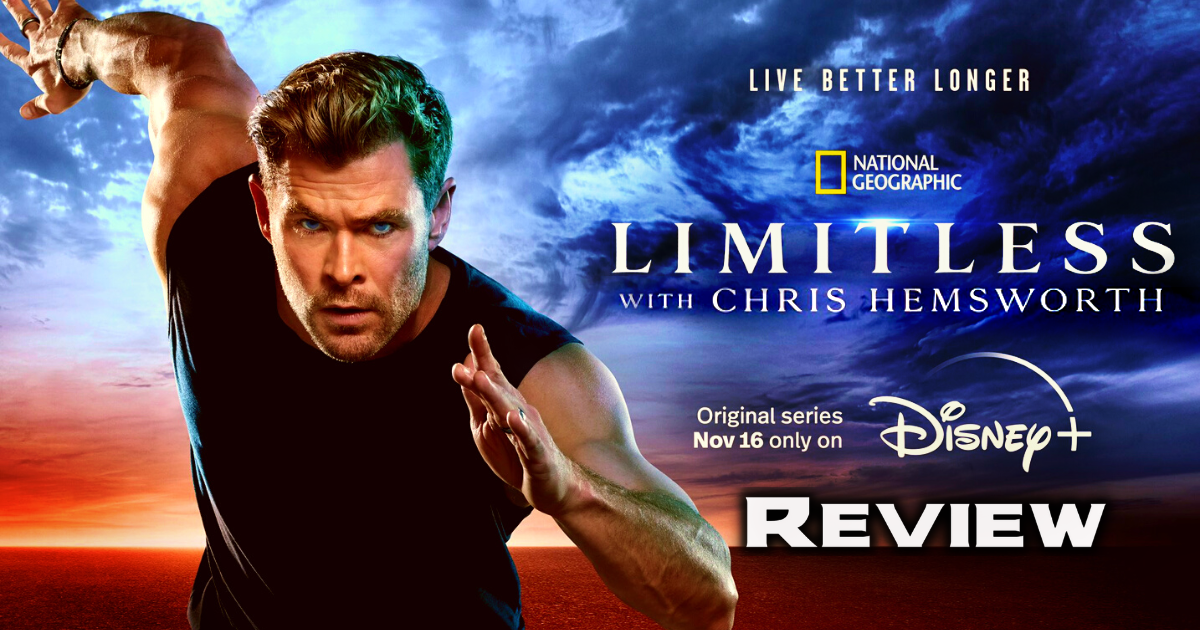 Arriving later this week on Disney+, Limitless with Chris Hemsworth explores a subject that most people come into conflict with at least once in their life, aging. Be it the increasing number of candles on our birthday cake, the gray hairs and laugh lines, or even the sore and tired backs and knees as we grow older. Don’t get me started on the frequent bathroom trips during the night. Aging comes in so many ways and at times it can feel like a daily battle against it.

It’s nice to know we and Chris Hemsworth have that in common. However unlike the rest of us, Hemsworth has a six-part documentary series where he not only documents his journey to understand how aging impacts his body, but he explores ways to actively fight against it.

I wasn’t sure what to expect from the series if I’m being completely honest. A documentary series like this seemed completely out of the box for the actor who is known for his role as Thor in the MCU among other more comedic parts. And yet, Limitless with Chris Hemsworth might be one of his best projects to date, and the most important show I’ve watched this year. So what makes Limitless such a fantastic show? It’s that it gives you so much, with many messages and takeaways to improve viewers’ lives as well.

[Warning: light spoilers and impressions from Limitless with Chris Hemsworth are below]

A real-world journey with the God of Thunder

As the series begins and sprinkled throughout the six episodes, viewers get a sense of the real motivation behind Limitless with Chris Hemsworth, which is his fear and anxiety of growing old. As the actor describes early in the series, this anxiety and fear come from his years of training to play Thor in the Marvel Cinematic Universe. Every time he prepares for the character, it becomes more difficult to look like the Norse God and to upkeep that throughout the production, a sentiment shared by Hugh Jackman in the past about keeping up his Wolverine physique.

However, for Hemsworth, this isn’t just about the physical appearance of his body, but about the issues like the loss of strength, agility, and mobility, as well as the psychological aspects aging has on an individual. So he sets out to find answers to some of these issues and ways he can change his life for the better while increasing his life expectancy and quality of life along the way.

Almost becoming a mantra throughout the series is Hemsworth’s desire to grow old enough to see his grandchildren and great-grandchildren. This wish is truly a motivating factor for the actor as he does some of the craziest tasks in an attempt to push his body to the limit, expanding the boundaries of what he can do and making his life better in the long run.

Others join in on Chris Hemsworth’s journey

Watching Hemsworth on this journey of self-discovery is enjoyable enough, however, the series becomes even more enriched by the people he brings on. Many of the episodes feature people from his life that join him in participating in certain tasks, however, none nearly go as far or do as much as Hemsworth himself. The rotating cast of people adds some levity to the docu-series, which could have felt bogged down with such a difficult subject.

Hemsworth also has experts along for the journey, which adds credibility to show in a significant way. Each topic, because each episode focuses on one specific aspect of aging, has at least one, if not more, expert in the respective field who brings him the science behind whatever task he is set with. He works with personal trainers, scientists, world record breakers, and so many others to provide the best and most up-to-date information to help him live a better life.

Perhaps the best and most emotional aspect of the series is the individuals invited to the series who share their personal stories. Some of these individuals are scientists, trainers, and record breakers who are also there to help him achieve his goal. Others are individuals who are just there to help him learn a lesson or restructure his thought pattern in new and novel ways. This is seen quite a bit in the finale of the series, which was my personal favorite. As a psychologist, these moments meant the most because they helped Hemsworth deal with the psychological aspect of aging, which so many people forget about.

The good and the bad of Limitless with Chris Hemsworth

Perhaps the best part of this series for me was the information I was able to take away from it and can now implement in my own life. The science was presented in a viewer-friendly way, that provided cutting-edge science in easily digestible pieces. From things like breathing exercises to showering with cold water, there are tons of amazing advice and easy practices that can be implemented into our lives.

The last episode of the series, without spoiling it, was easily the best episode and helped me to gain a new perspective on aging and death. This episode created a sense of peace in me not just for the loss of my own life, but for those closest to me. As someone who became a first-time dog owner over the pandemic, the thought of my puppy growing older and eventually leaving this world saddens and gives me a heavy heart. However, throughout this show I was able to come to terms with that and so much more about the fleeting time life has to offer. The cathartic cry I had during this series was well-needed and made the show even better for me.

Limitless with Chris Hemsworth also has the actor’s signature humor splashed across it, which was not something I was expecting from the series. In my experience, documentary series tend to be a bit more serious in nature and while this one does have a lot of seriousness, there is a humor to the show that made it that much more enjoyable to watch. It’s a great reflection of how even when life throws your serious moments or thoughts to deal with, like aging and death, that we can find lightness and humor in it. I found this relatively healing as I watched and I imagine others might as well.

Those looking for an in-depth look into Chris Hemsworth’s life such as MTV’s Cribs or Keeping Up With The Kardashians will be disappointed. This series isn’t a reality series rehashing his day-to-day life. It’s focused on this one specific journey as he tries to challenge the restraints age is already placing on his body. That being said, there are points we get small glimpses into his life and family, with his wife Elsa Pataky playing a key role in at least one of the episodes. However if you’re going into it thinking this is a reality television series, you will be disappointed.

As much as I enjoyed Limitless with Chris Hemsworth, I will say that at times I feel like the series could have done with slightly longer episodes or paced out differently. Each episode, with the exception of the last one, is a pretty standard length of time for television but is jam-packed with information, such as the science behind aging, ways to tackle it, and other individual stories related to the subject at hand. As well, there’s also one large task Hemsworth tackles in each episode, along with quite a few mini-tasks building up to it.

That is just so much to shove into one episode, that at times the series went by at break-neck speeds to achieve it. The show is enjoyable, therefore I would have no problem watching it again or even multiple times to absorb all the information, but perhaps with a bit more time in each episode, it would have been easier to take it all in on one go-through.

I enjoyed myself a lot watching this series. It was exciting, hilarious, and impactful. I laughed, I cried, and I found myself reflecting on my own life and how I can do better with the time I have left. Life flies by, especially when you’re living and waiting for the next big event. However, there are things we can do every day to help make the journey easier, more enjoyable, and better use of our limited time.

I didn’t think I would walk away from the show with so much hope and a better look at what’s left, so for that I’m beyond glad this series ended up in my mailbox. This series should be on your list to watch, especially if you are reaching a point in life where the impact of age is starting to occupy time in your mind. Sure, there is nothing we can do to stop it, but Chris Hemsworth shows us that there is something we can do to combat it.

Limitless with Chris Hemsworth arrives on Disney+  this Wednesday. Are you planning on checking out the show? Let us know on Twitter or The Cosmic Circus Discord. And if you haven’t already, check out my spoiler review of Thor: Love & Thunder, the film that coincides with the filming of this fantastic new documentary series.

Thor: Love and Thunder Review: An Ode to the MCU Gods