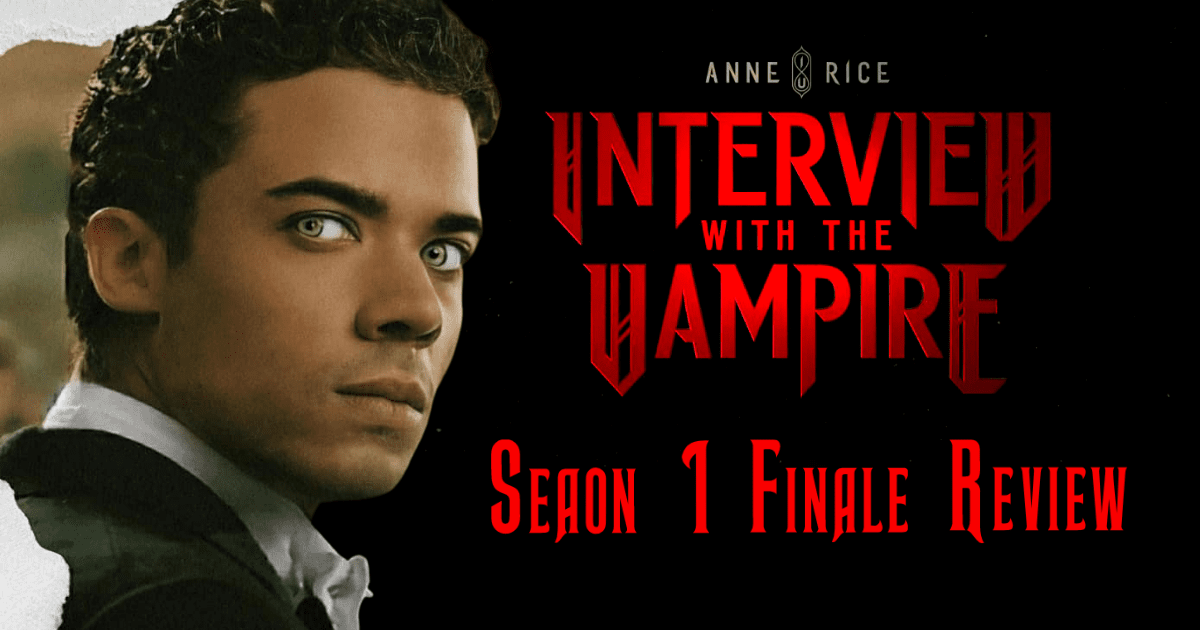 All good things must come to an end, at least that’s how the old saying goes. This saying crossed my mind a few different times as I watched the Interview With The Vampire season 1 finale. While this episode isn’t truly the end, with a second season of the hit AMC show already announced, this episode will be the last one for a while.

The closing of this first chapter in Louis’s (Jacob Anderson), Lestat’s (Sam Reid), and Claudia’s (Bailey Bass) adventures isn’t the only thing coming to an end. The characters within the series see a finality coming to their time in New Orleans. “The Thing Lay Still” played out like a game of chess, with pawns sacrificed, Queens and Kings making power moves, and more than one shocking moment that made me gasp.

The final episode of this season was the icing on a magnificent cake, one that I cannot wait to dig into again. So how did Interview With The Vampire’s season one final chapter begin? With a plot full of hope for a brighter future. If you need a refresher, check out our Interview With The Vampire tag, which has reviews on the first two episodes of the AMC series, along with Luna Gauthier’s book review of the novel!

[Warning: Spoilers from Interview With The Vampire season 1 are below]

“Like Angels Put in Hell by God” – Claudia’s plans

The penultimate episode, “Like Angels Put in Hell by God” ended with Claudia making perhaps her biggest move towards a life of freedom: that it’s time for her and Louis to kill Lestat. Claudia didn’t come to this decision lightly, having suffered at the hands of Lestat for way too long. She once had a taste of freedom from Lestat, however, returned to save Louis, the person she loves and cares about the most.

But both she and Louis have been on the receiving end of Lestat’s abusive, manipulative nature, which has been increasing over time. And in those closing moments, which gave me chills, Claudia decides no more, showing audiences a colder more calculated side than we have seen up until this point.

She’s made up her mind and nothing will change that. This is mirrored perfectly in the game of chess she’s playing with Lestat while she shares the plan telepathically with Louis. This moment is by far one of my favorites of the entire season.

Laying a trap for the vampire Lestat

So when “The Thing Lay Still” begins, Claudia and Louis work together to lay a trap that should rid them of Lestat once and for all. This trap just also happens to coincide with a gigantic party that the three vampires throw in celebration of Mardi Gras.

This party isn’t just a normal celebration, it’s also the trio’s final hurrah in New Orleans. Their behavior and agelessness are beginning to become noticed by many, which means it’s time to move on and start over somewhere else with a clean slate.

The event itself is one of the biggest parties I’ve ever seen, reminding me of the masquerade ball from Phantom of the Opera, masks and all. The three vampires have invited everyone of importance from New Orleans, tagging a few of the guests for dinner after.

Claudia informs Louis that the drugged one of the tagged individuals with laudanum, which contains opium, and arsenic. The idea is that Lestat will drink from the tainted individual, killing him so that Claudia and Louis can escape to their new life together.

What Claudia doesn’t account for is the love that Louis still feels for Lestat. There’s a moment during the party between the music, the guests, and the dancing when Louis sees a glimpse of the Lestat that he fell in love with so many years ago. That glimpse is enough to make Louis second-guess the plan long after it’s already in motion. Claudia manages to talk him off the cliff, bridging him back to the reality that Lestat is evil.

The after-party doesn’t quite go according to plan, leading to one of the bloodiest and most tense moments of the entire season. I felt myself holding my breath from the moment Antoinette arrived on screen with that feeling lasting until the closing moments of the episode. The reveal at this moment was huge, although, for those who have read the book, it would have felt incredibly familiar.

However, the reveal at the tail end of the episode, when it shifts back to the present day as Daniel (Eric Bogosian) interviews Louis, was the biggest shock of the entire season. I won’t say much about it, because it’s truly a moment that needs to be seen and not read about. But fans of the novel series, or the 1994 film, will instantaneously recognize the individual who appears in this moment and will probably be incredibly confused about what is happening.

The final moment in the season finale was a gigantic leap from the source material, helping to cement Interview With The Vampire as something very different than its predecessors.

“The Thing Lay Still” was an excellent closing chapter for an already incredible first season. Every episode continued to build a bigger and more complex universe, however never overcomplicated it in any way. The story focuses on this family of vampires, which will continue to be the driving factor in the second season. At least I would assume so seeing that season one of Interview With The Vampire only covers about the first half of the book.

As the season progresses, however, it puts a bit more energy into building the larger universe, sprinkling in bits here and there that there is more to the world of vampires than Lestat has let on about. When Claudia meets another vampire in the middle of the season, it becomes clear that there is a bigger picture coming into play, which is exciting and makes me hungry for what is to come. They are definitely looking past just the first novel for inspiration, as the story expands past Louis and his intimate worldview.

While I love what this series is doing, I can understand where fans of the original series of novels may be disappointed. This is definitely not a straight adaptation, and similar to Game of Thrones, has decided to go in its own direction, becoming something different.

What I love is that even though the show is adapting to a new time, it still has the essence of the original novel and the 90s film without having to be a 1:1 rehash. It creates an environment of excitement over the unknown, while also having a general idea of what is to come next. I think the decision to make big changes was the best call for the series.

It does feel though that the series downplays some of the seriousness of the situation with Lestat. In the novels, Lestat is abusive and cruel, however, at times in the series Lestat is charming and comes over as incredibly kind and loving to Louis.

I understand they were building up the dance of the relationship, which occurs in abusive relationships, but it also felt like the show ignored some of the sociopathic tendencies of Lestat until the last few episodes of the season. That being said, I think now that we know more about Lestat and his ways by the end of episode seven, in season two we’ll see much more of the crazed Lestat that is haunting and terrifying in so many ways.

Final thoughts on Interview With The Vampire so far

AMC’s Interview With The Vampire is one of the best shows I’ve seen in a long time, cementing itself as one of my top favorite shows. It was a retelling of a story I know quite well but was exciting and different in all the best ways.

It’s incredibly queer, which as a gay man was fantastic to see in such a mainstream show. Usually, I watch television with my computer in my lap and my phone in my hand, however when it came to this show, I was dialed in and the rest of the world was shut off.

The series is a fantastic escape with lots of charm, a bit of scariness, and tons of potential. We’ve barely scratched the surface of what Interview With The Vampire can be, with a larger world coming soon in season two and the spin-off show The Mayfair Witches. If you haven’t checked the series out yet, I implore you to do it soon because you truly won’t regret that decision.