One of the best parts of Disney+ for this writer is how it expanded the MCU in some major ways, while also making being a nerd convenient. Serving as the new home and hub for all things Marvel, with the exception of the Sony properties, a jump into the MCU is only a click away. Disney+ has also brought some stellar new shows and animated series from the Marvel Cinematic Universe, creating a more expansive and well-developed universe for fans to get lost in. The newest entry into the MCU, five I Am Groot shorts dropped today, providing small glimpses into the day-to-day adventures of the cutest little tree in the galaxy.

Each episode is its own little story, exploring Groot, who’s still voiced by Vin Diesel, from the post-credit scene of Guardians of the Galaxy and beyond as he learns to navigate the universe as a baby. So are these shorts worth your time? I suppose it depends on what you’re hoping to get out of watching them.

[Warning: Spoilers from the new I Am Groot shorts are below!]

The first short seems to pick up not long after the post-credit scene of the first Guardians film. Groot is no longer just a twig but is closer in resemblance to Baby Groot in Guardians of the Galaxy Vol. 2. Still in a pot, Groot is living his best life eating cheese puffs and being adorable. However, when some droids bring in a new bonsai tree Groot becomes rather jealous of his replacement.

So begins his revenge plot of bringing the bonsai tree down and hilarity ensues. He learns how to extend his arms to great lengths, pulling at the limbs of the bonsai tree and trying to earn his place as the top tree once more. Through an accident and a smashing of the pot, Groot finds his feet and is off to the races. This is the only short of the set that takes place between Guardians of the Galaxy one and two, with the rest coming after the latter.

Looking out for the little guy

We open on a barren-looking planet with the Guardians’ ship in the background. Baby Groot finds some sticks and within minutes makes an elaborate tree house for himself, which is quite the impressive feat. However, a bird four times the size of Groot steals it, sending Groot into a temper tantrum. While this gag of Groot’s tantrum might make the parents of toddlers’ eyes twitch, I couldn’t help but laugh profusely at it.

In the aftermath of the tantrum, Groot stumbles onto a tiny race of creatures living under a rock. Groot finds them to be exciting playmates, but the little guys view Groot as a very large attacker. The tiny aliens begin a rain fire down on poor baby Groot, scaring him so much he farts out a leaf. As the leaf slowly descends on the tiny aliens, they rejoice! For food and salvation have finally arrived. Well, for at least a moment.

Baby Groot finds himself woken in the middle of the night, wearing a onesie that was so cute, I laughed until I cried. Groot discovers on his hunt a broken vial, which provides a clear path to follow in the form of liquid. Following a late-night pit spot, Groot comes face to face with…himself? Well not exactly.

Groot runs into an Iwua, a shapeshifting alien that ensembles crystalized water, who has taken Groot’s appearance. In true Guardians of the Galaxy fashion, the two creatures start a dance-off to determine the real winner. I’m sure if Star-Lord (Chris Pratt) was there, he would be proud of the youngest member of the team. However, Groot has something else up his sleeve for the sneaky Iwua, a conclusion that made me giggle quite a bit.

Everyone and everything needs a bath and Guardians of the Galaxy are no exception! Groot finds himself a mud bath to relax in, bringing the spa to him in whatever galactic forest he was in. When he leaves the pool, Groot discovers that a fine layer of leaves has grown on his body, similar to hair. This leads to a wonderful montage of Groot trying on different styles of hair, causing another alien on the planet severe irritation.

In the final episode, which in my opinion was easily the cutest of the collection, we follow Groot as he makes a picture of his family for Rocket (Bradley Cooper). Groot races around the ship, collecting supplies necessary for the picture, and somehow get distracted by making an explosive. Blowing a hole in the ship, which draws Rocket’s attention, little Groot attempts to fix the problem with duct tape. The interaction between Rocket and Groot surrounding the picture caused tears to swell in my eyes because it encapsulates the love between the two.

Final Thoughts on I Am Groot

This is definitely the cutest entry of the MCU so far. Baby Groot is 100 percent the baby of the family that everyone can’t get enough of. He’s sweet, he’s fierce and sassier than most toddlers I know, which is probably the biggest selling factor of these shorts. If you want something mindless but fill your heart, this is the show for you.

But if you’re expecting large connections to the MCU or pushing forth the narrative of The Guardians of the Galaxy, you’re barking up the wrong tree. These shorts felt aimed at younger children as a gateway into the MCU. These episodes have jokes that the entire family can enjoy, however, I’m not sure how many adults will be pining for a re-watch.

The VFX from this series was exceptional. I knew before watching it that the series was animated, however, the appearance of the series is hyper-realistic. Groot and Rocket looked ripped from the movies and put on Disney+. I was stunned at times with it, the entire show felt of the same quality as the films, something I wasn’t necessarily expecting after What If…?

It felt like Kirsten Lepore, both the writer and director of all five shorts, understood the heart and message of Guardians of the Galaxy. You could tell she took the time to fully grasp what made the first two movies so special, turning that up exponentially.

I think everyone should check out I Am Groot at least once, though don’t expect mind-blowing storylines. There aren’t any hints about what’s to come in Guardians of the Galaxy Vol. 3. We don’t learn the secrets of the universe through Groot’s eyes. However, you may find some good laughs and an escape from reality, in small bitesize amounts.

These fun new I am Groot shorts are currently streaming on Disney+. Have you watched it yet? Let us know what you think over on Twitter!

And if you need a snack for your viewing party, check out Luna Gauthier’s I Am Groot Chocolate Bark, the newest recipe from Cosmic Cuisine! 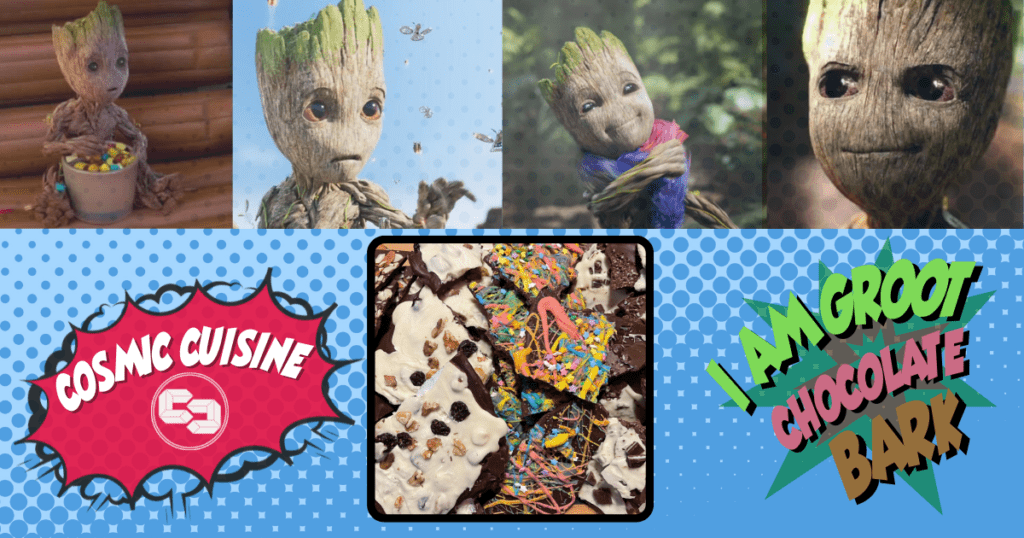