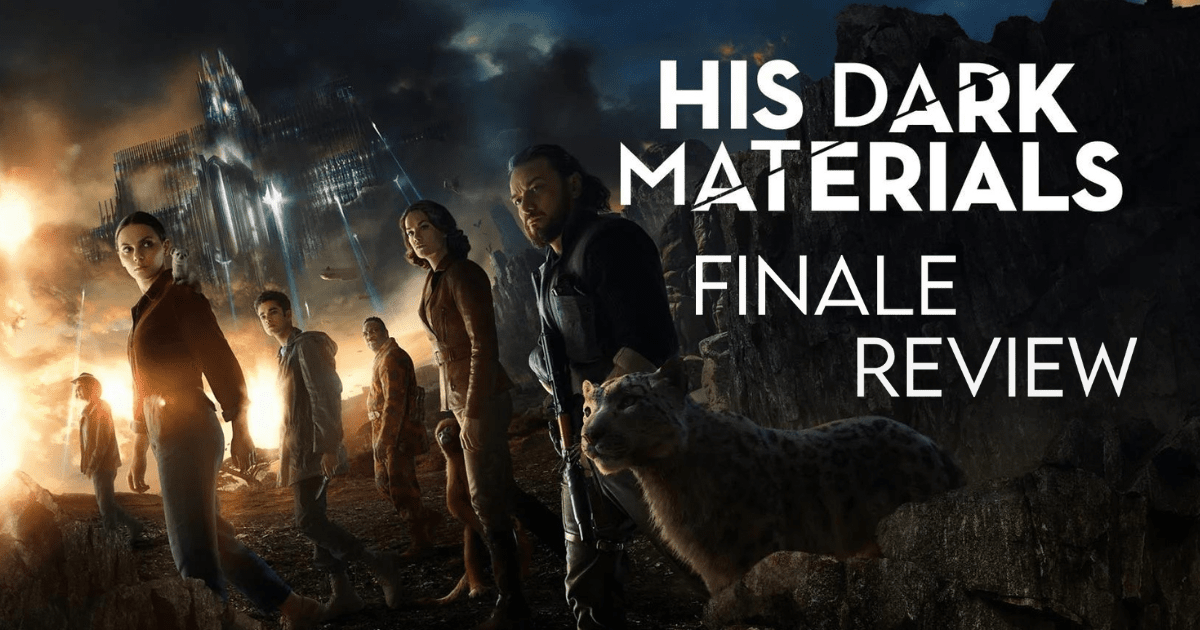 After three seasons of excellent storytelling, His Dark Materials has finally reached its conclusion on HBO. The series is based on Phillip Pullman’s trilogy of the same name following the adventures of Lyra Belacqua and Will Parry, two pivotal individuals in the war between religion and free will. The third season arrived after a long two-year wait but has rolled out in true event-style fashion. HBO has released the eight-part series in two episode batches over the course of December.

This approach made the last season feel like an epic story instead of just another season of a show because each time you turned on His Dark Materials, it was truly an event of an evening. The His Dark Materials series finale might have been the most incredible two hours of the final season, with the story finally reaching its climax while also exploring the aftermath. The war is no longer coming, it’s here, and the fate of every character hangs in the balance between Metatron and the fight for free will from his control.

Dafne Keen, Amir Wilson, Ruth Wilson, and James McAvoy lead the charge in this fantastic last chapter. Amit Gupta returns to direct episode seven, having directed three other episodes this season, with Harry Wootliff taking over for the finale. Francesca Gardiner wrote both parts of the finale, bringing this epic series to its conclusion.

So how did the His Dark Materials series finale wrap up Lyra’s story? With a promise of more to come. If you need a quick refresher on how this season began, check out our series premiere review!

[Warning: Spoilers from the His Dark Materials series finale are below!]

A completed mission and the war with Metatron begins

As we enter into the first hour of the final chapter of His Dark Materials, Lord Asriel (James McAvoy) and Mrs. Coulter (Ruth Wilson) learn that Lyra (Dafne Keen) and Will (Amir Wilson) have completed their mission in the Land of the Dead.

Their goal was to release those stuck in purgatory and allow them passage into heaven, which is more like becoming one with everything. The dead who were trapped in purgatory, when they cross through the door opened by Will, will turn to dust and reunite with the universe. This action, while being incredibly poetic, also weakens Metatron.

This gives Lord Asriel an opening to strike Metatron, which leads to the all-out war we’ve been promised for three seasons. However, he’s also annoyed to find out that his war for free will is nothing more than a distraction for Lyra to complete the prophecy foretold by the witches. That being said, Asriel brings about the best of distractions, with an epic battle between his small-looking yet formidable troop against the many angels of Metatron’s army.

The battle itself reminded me a bit of the final battle in Avengers: Endgame mixed with a Star Wars-level space fight, with incredible visuals for the eyes to feast on. Though this battle isn’t the main focus of the fight against Metatron as the fight becomes personal with Asriel and Coulter as the main focus.

Inside the Kingdom of Heaven in His Dark Materials series finale

Arriving in the Kingdom of Heaven, Asriel fights a Metatron-created replica of Asriel in a well-choreographed fight scene. This scene showcases how well the action of this series is, especially when it’s less CGI-focused. However, perhaps the best part of this segment was the scene with Wilson’s Coulter speaking to Metatron in a different part of the clouded mountain.

Sensing that the tide was changing for the worse, Metatron summons Mrs. Coulter in hopes of righting the sinking ship. He finds her deplorable but also intriguing. He offers her a chance to become one of his angels, granting her immortality if she joins him. This scene alone brought me to tears, as Coulter admits to hating how her love for Lyra makes her weak, a move that finally showed some honesty from a character who has lied her entire life. However, in true Mrs. Coulter fashion, this grain of truth was only to hide her ulterior motive.

Metatron brings Asriel and Coulter together for one final moment, a scene that covers the entire emotional gambit. Asriel fears Coulter has betrayed his cause and their daughter. But for once, Mrs. Coulter is thinking of someone other than herself. The two grab Metatron and fall into the newly weaponized Abyss, which Coulter’s dæmon activates. All three perish, but the war with the false god is finally over.

The real mission for Lyra and Will and fulfilling a prophecy

All while this is happening, Lyra and Will are on the true mission of the series, the one that is actually important to saving the world. Their first goal is to find their dæmons and send them somewhere else for safety, which they complete relatively quickly. Though while the fight with Metatron is happening, their secondary goal is to find a translucent box and release whoever is instead.

Doing so, they discover an old man, who is actually the Authority. Metatron trapped him in the box and assumed the throne. The man crumbles to dust immediately, leaving the path toward fulfilling the prophecy completely open.

Everything, before mentioned, was packed into the first hour, leaving the second half of the His Dark Materials series finale to examine the aftermath. Lyra and Will end up on Mulefa World, attempting to reunite with their dæmons. It would be easier if Pan wasn’t still mad at Lyra for separating them to journey into the Land of the Dead. In her search for Pan, Lyra reunites with Mary (Simone Kirby) the nun turned scientist.

Mary plays an important role in two ways for Lyra and the study of dust. She explains in depth the complex nature of dust and how it arises from consciousness. She shows them, with the help of the amber spyglass, how the Dust surrounds them all, with more Dust surrounding those with more knowledge about the world, A.K.A. grown-ups.

Prophecy-wise, Mary is the serpent that tempts Lyra, the second Eve. She shares a story of love over devotion, her personal story of how she quit being a nun because love was more important. This pushes Will and Lyra to kiss, restoring the flow of Dust in all universes. It also shifts these two from children to adults themselves, with Dust swirling around them, as well as their dæmons settling into their permanent forms.

This moment is a gigantic shift in both their personal lives and the lives of every universe connected by the Dust. However, this joyfulness is not meant to last. Approached by an angel, the trio is informed that Dust is still leaking out of the worlds and the only way to save everything and everyone is to close every door that’s open, with the exception of the one in the Land of the Dead.

This is where the finale turns heartbreaking. The loss and pain Lyra and Will experience are overwhelming. I found myself sobbing long before either one of them. Closing all the windows requires Will to shatter his knife once again. As well, neither can live in the other’s world long, meaning that the love that just sprung into life must be severed. Our heroes take the news with grace beyond their years, something I’m not sure many their age could do. But with the fate of the world in their hands, they do what they must.

An opening for more stories from HBO’s His Dark Materials

In a sequence ripped straight from the pages of The Amber Spyglass, Lyra and Will visit the same bench in their respective worlds at the exact same time each year. This action allows them to feel relatively close to the person they love, even when it’s impossible to ever be together again.

We get to see both of them grow up into adults, which was a touching scene that absolutely broke my heart. I think any adult or individual who has had their heart broken will easily relate to our heroes in this scene.

In a simple over-text at the end of the episode, they inform the audience that this ritual continues on, that is until Lyra goes on another journey, hinting at her future, explored deeper by Pullman in The Book of Dust. Perhaps there’s a spin-off series coming one day, which I sincerely hope they do.

The His Dark Materials series finale worked well for more because of how it was structured. Putting most of the action in the first half of the two-hour block allowed for the epic scale that fans have come to expect from the series, but the second half allowed viewers to sit with the two main characters in a more intimate way. At its core, the story was about the growth of Lyra from a child to an adult, so to end the series in any other way would have been a travesty. The emotional ending and exploration of that growth was the only way for this series to reach a satisfying conclusion.

Final Thoughts on His Dark Materials

Having been a fan of the novels long before the HBO series, I loved how His Dark Materials wrapped up its story. HBO didn’t try to milk the story for tons of seasons but instead stayed true to the series and the core message of the novels.

Ending it similarly to the novels was the right choice because it was already the perfect ending for Lyra and Will’s journey. His Dark Materials is an exceptional piece of television, another homerun from HBO, so if you haven’t checked it out yet, you’re missing out.

His Dark Materials is currently streaming on HBO Max. Have you watched the finale yet? What are your thoughts? Let us know on Twitter or in our Cosmic Circus Discord. And if you haven’t already, check out our review on The Amber Spyglass, the third book in the His Dark Materials trilogy of novels.

Book Review: The Amber Spyglass: A His Dark Materials Novel by Phillip Pullman