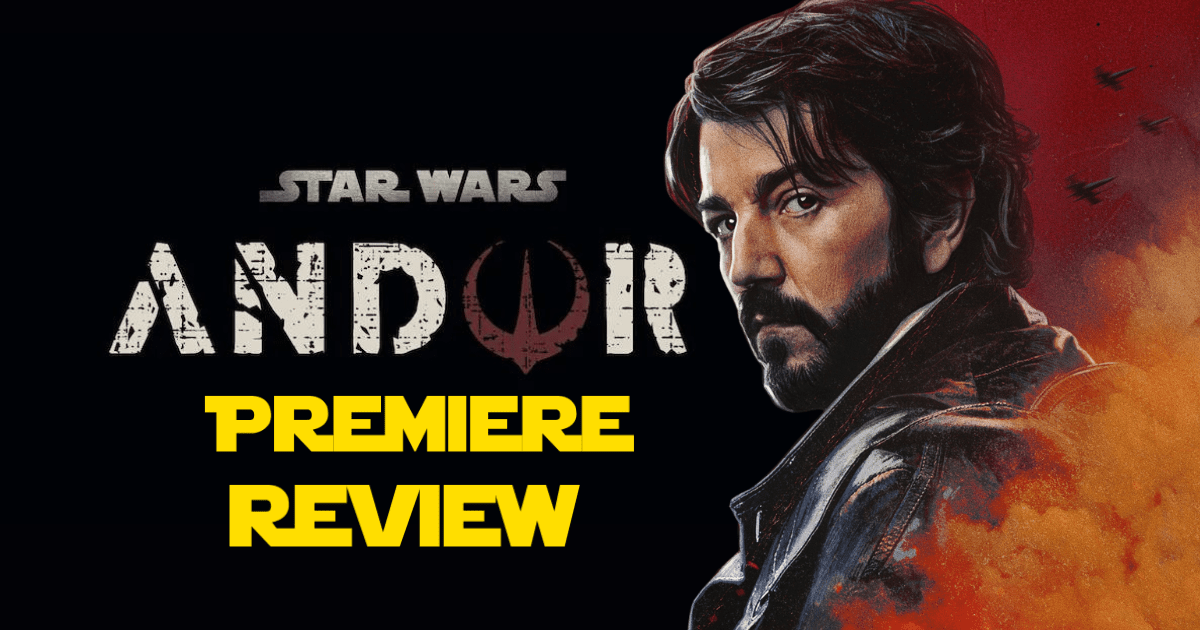 It’s been 6 years since we first met the rebel fighter Cassian Andor, played by Diego Luna, and many fans loved how the character was written. Although Rogue One was a prequel to A New Hope, with the former film ending the story arcs of the Rogue One team, fans still wanted to learn more and dive deeper into the history of these characters. Finally, in 2018 Disney and Lucasfilm revealed to fans that a prequel series to Rogue One called Andor would debut on Disney+.

It took 4 years to finally see Cassian Andor’s adventures on the streaming service, so were the first three episodes of his series worth the wait? And if you need a quick refresher on Rogue One: A Star Wars Story, check out Tucker’s review!

[Warning: Spoilers from Andor’s three-episode premiere and Rogue One are below!]

Cassian was born on the planet Kenari, where he lived with his parents and sister. However, we soon learn that he wasn’t born Cassian, but Kassa. When a Republic ship crashes near his village, he and his people go check out the wreckage, only to find dead Republic officers.

He’s later rescued from Kenari by smuggler Maarva Andor (Fiona Shaw) and her husband who both wanted to save him from the Republic. The Republic want justice for those slain officers, even though Cassian hadn’t killed any of them. This life-changing event all happened on 20 BBY and was the moment when Kassa became Cassian Andor.

The audience didn’t get to see much of Cassian’s childhood at home, however, some of his earlier memories are shown through the premiere. If you remember in Rogue One, Cassian said “I’ve been in this fight since I was 6 years old”, which is a long time for a 26-year-old guy and even more for the audience to absorb.

His past story will surely be explored in future episodes, such as how Cassian learns another language, the loss of his stepfather, and how he became involved in overthrowing the Empire (which ultimately results in his death). There’s already a season 2 in development that may elaborate more, so there’s plenty of time to receive these answers.

Cassian Andor is not a rebel yet!

When we meet Cassian in the first episode, we know it’s 5 years before the events from Rogue One. He hasn’t yet joined the rebellion and doesn’t even know that there are things much bigger and more important than him.

Throughout Andor’s three-episode premiere, we get to see how different this Cassian is from the one we know from Rogue One. He is inexperienced, impulsive, and, most importantly, he is lost. His current goal is to find his long-lost sister, who flew away from Kenari and wandered across various planets.

He finds her trail on a planet called Morlana One. His leaving the planet with not-so-useful information leads to the deaths of two Corporate Security officers, which leads to a warrant calling for his arrest.

This was the moment Cassian returned to his new home planet of Ferrix. Shortly after his return, he decided to leave the planet and sell one of his most expensive treasures, the untraceable Starpath unit. His friend Bix (Adria Arjona) tells him that she knows a person who would very much like to meet Cassian and even buy his treasure from him. The buyer is Luthen Rael (Stellan Skarsgård), and he is more interested in Andor’s skills than in the tiny box.

That’s why he wanted to meet him, not because of some crates Luthen Rael could have thousands of if he wanted to, but because he was interested in a person who really wants to destroy the Empire to his last breath. This is something that can never be bought, which is why he took an interest in Cassian.

Luthen Rael knows what he’s doing and knew how much potential there is in Cassian. During their conversation, they learn that officers are approaching and want Cassian. In their attempted escape, they kill many of these officers and made sure to uncover who they were dealing with.

As we know, the galaxy under Imperial rule was not a happy place to live. It was a much darker place than seen during the prequels, and that’s what Tony Gilroy (screenwriter of Rogue One & Andor) is trying to show audiences. When Cassian lived on Kenari he was happy, as were the people and environment around him. But by the time he is an adult resident of Ferrix, everything is darker, colorless, and even lifeless.

This is not another Mandalorian, Boba Fett, or Obi-Wan story with lightsaber fights or cute kids as comic relief. It is the story of a lost boy who tried to find his sister, and in doing so made mistakes that led to him becoming a target for Corporate Security and the Empire.

Watching Andor, I had the feeling that Diego Luna must have spent the time between the announcement of the series and the start of shooting to learn everything possible about Cassian. He’s the same character we all know and love from Rogue One and yet I still found that I know nothing about him. This leads me to believe that what we saw in Rogue One was just the tip of the iceberg for this dynamic character.

Revisit Rogue One with this review by Tucker Watkins. So far those 3 episodes were something different from all those live-actions shows in the Star Wars franchise that we’ve got. We see that it is a dark universe, without many very prosperous worlds like Coruscant, Naboo, or Alderaan. Danger may lurk at every corner in the form of a stormtrooper or even some minor thief fighting for survival. This is not the galaxy we are used to, it is a wretched hive of scum and villainy. And that’s why what Andor shows us works so well. As viewers, we need to get into the environment in which Cassian works, we need to see what he sees, and feel what he feels. We don’t have to hear that it’s a dark and destroyed planet where there were mines and some miles further away there were beautiful forests, palaces, and lakes. No, when Cassian, for example, says that it was a very beautiful place and it was destroyed when the Empire took over, we see that it was not some fairy tale and instead a destroyed place stripped of its beauty.

A bright future lies ahead for Andor

Although we’re only 3 out of 12 episodes into Andor’s first season, I think we can safely assume that this is one of the most interesting Star Wars series so far. These episodes can safely be called “prologue”, as they are only a small part of what awaits us in the coming weeks.

Despite the fact that the series has a lot of positives, there are also some negatives, which, in my opinion, do not affect the overall of this “prologue” so much. Personally, I think that the first two episodes might as well have been strung together, as they don’t have any interesting action scenes, let alone a good pace to carry the story. There were also some problems with special effects, which rarely, but still, give much to be desired.

And yet, the story is so interesting and unexpected because of the Rogue One factor and the fact that we know about Cassian’s fate. However, it still doesn’t change the desire to follow the development of this character and learn more about him and his companions.

Along with Diego Luna’s Cassian Andor and Stellan Skarsgård, we will also see Anton Lesser, Alex Ferns, and Genevieve O’Reilly in this series, with the latter reprising her role as Mon Mothma.