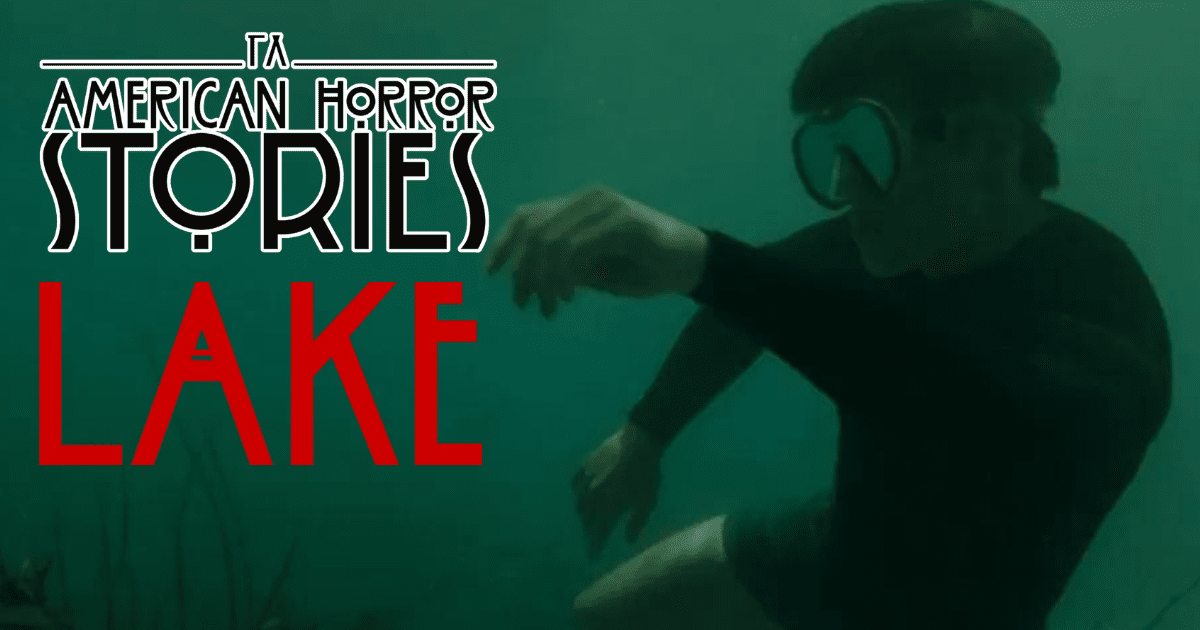 The second season of American Horror Stories has finally come to a close this week, a season that brought many highs and lows over the course of the eight episodes. Some episodes will remain top tier in my mind, such as “Dollhouse”, “Drive”, and “Aura”, while others I didn’t care for nearly as much as the others, looking at you “Milkmaids”. For the complete list of reviews from this second season, check out The Cosmic Circus’s American Horror Stories collection, where I hope you enjoy reading them as much as I enjoyed writing them. However, we have one more episode to explore, with American Horror Stories: Lake.

I was excited and shocked to see Alicia Silverstone’s name attached to this season’s finale. Having been around for as long as I can remember with so many iconic roles (Check out our report on Alicia Silverstone’s appearance at Motor City Comic Con), having someone of her caliber in American Horror Stories: Lake felt like that treat.

This episode also included Teddy Sears, from The CW’s The Flash, and YouTuber Olivia Rouyre. With Manny Coto back to write this finale and Tessa Blake directing, did this second season of American Horror Stories stick the landing?

Fun and fear in the sun in American Horror Stories: Lake

The finale opens with a group of four twenty-somethings lounging on a boat in the middle of a gorgeous lake. The sun is shining, the drinks are following, and fun memories are being made. Jake (Bobby Hogan), the hot but shy and nerdy younger brother of Finn (Olivia Rouyre), talks extensively about the history of the lake.

The lake was created by erecting dams, with ruins of towns and their secrets buried under the depths of the water. Jake wants to swim below the depths to see the town of Reedsville, a swim that goes from fun to deadly in a matter of minutes.

During this deep dive in relics from a time past, a dead-looking hand reaches up from some rocks, grasping Jake’s leg and pulling him back into the depths of the lake. Finn struggles to pull her brother back to the surface but ultimately swims up for air, losing her brother to the lake completely. In horror, she watches his lifeless body as it’s dragged towards the bottom, gone in the murky blackness below.

Four months later Finn returns to the family home, where the happy life they once had now appears shattered. Her father Jeffrey (Teddy Sears) and mother Erin (Alicia Silverstone) are both grieving in different ways. Jeffrey has thrown himself into his work, leaving Erin to grieve by herself.

Both parents seem concerned by Finn’s conviction about the event, as she still believes something or someone grabbed her brother in the lake. However, after some freaky events, one with a similar hand in the bathtub and another with Jake’s voice calling out from the pool, Erin begins to believe Finn’s story and sets out to discover what is going on with Lake Prescott.

Erin, along with Finn, returns to Lake Prescott hoping to recover Jake’s body, but together the two find a larger mystery at the bottom of the lake. Chained to a concrete pillar in the same area Jake drowned were three skeletons, one of which had an odd-looking necklace attached to it. However, when Erin removes the necklace, she is dragged down and comes face to face with her dead son.

Escaping, Erin resurfaces and eventually tells the local authorities about her experiences in the lake, as well as the discovery of the three corpses and the necklace she removed. The Sheriff informs Erin that the symbol of the necklace is a symbol associated with the Boone family, who have roots in Reedsville.

The duo decides to go and talk to the only living relative of the Boone family, Millie (Heather Wynters), who has quite the story to tell – a story of murder, corruption, and greed surrounding the building of the dams. However, there is a huge familial connection involving Erin’s family, which reveals a lot about Jeffrey’s heritage and the reason for Jake’s death.

The good and the bad of AHS: Lake

As an episode, “Lake” was good, however, that is all it was. This episode wasn’t fantastic, but it also wasn’t bad. There was a great story within the episode that had a lot of mystery and intrigue to it. The idea of tormented spirits seeking revenge on a family for their actions is fantastic, give me more of that. But when I reached the end of the episode, it felt rather hollow, as if there was a chunk of the story that was missing.

There was one point where I felt like I had missed something super important because it felt like the story jumped from one part of the story to another. I think being a two or three-part story would have suited this one story more because there was so much lore and history presented that needed more exploration to feel complete. I also wished there was some better resolution with Jake’s body than the one we got, though that might just be a nitpick.

Alicia Silverstone and Olivia Rouyre were fantastic as the mother-daughter duo of Erin and Finn. It was great to see Silverstone once again on my screen and she did an amazing job as a grieving mother who needs answers to properly heal.

Rouyre has a lot of talent, however, I fear it was wasted in a story that lacked the proper depth for her character. I can’t wait to see her again in another story in the AHS universe, where hopefully she’ll have more of a chance to show her acting chops off and truly shine.

Looking at the entire second season of American Horror Stories, “Lake” falls somewhere in the middle. I didn’t hate watching this, however, with so many exceptional episodes it didn’t do enough to wow me. I was also hoping for another connection to Coven, with so many episodes of this season having the magical connection.

Overall, this season is stronger than the first, with all the good outweighing the bad. Although a few of the bad I could have seriously done without. American Horror Stories: Lake had enough good tidbits to make the episode enjoyable, especially for fans of the series. However, I don’t see it being high on my rewatch list when I do eventually watch them all again.