Report: ‘Fallout’ the TV Series to begin filming in June Report: ‘Fallout’ the TV Series to begin filming in June

From Megaton to Girdershade, Paradise Falls to the Republic of Dave, we’re coming to you cosmic wastelanders, with a special report about Prime Video’s Fallout TV series.

Unlike the settlement at Grayditch, things for the upcoming Fallout series are not quiet and appear to be moving along. We’ve found evidence that filming for Fallout will begin in late June of this year in New York.

A job listing on the industry website StuntAccess is looking for new hires for the Fallout gig. Prospective stunt performers would start work on June 20, 2022, in New York. It’s exciting to see that this project is actually happening and getting off the ground after years of rumors! 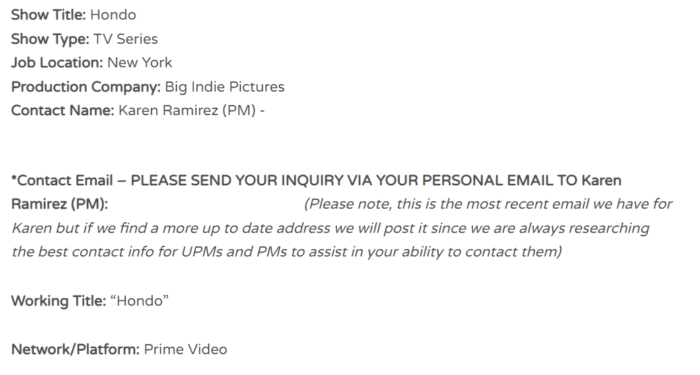 Unfortunately, the job listing doesn’t give us new plot details. The logline from the stunt website states, “The future once envisioned by Americans in the late 1940s explodes upon itself after a nuclear war in 2077.” It does give us a tidbit about casting. At least some of the project is being cast by renowned casting director John Papsidera.

We can also report that the Fallout TV series uses the working title or code-name of “Hondo.” Why a working title? Film and tv productions often use a different title during production to try to keep details under wraps. Marvel does this if you’re a fan of the MCU, and fans have made quite the sport of guessing what colorful names match upcoming projects.

It’s difficult to decipher why the name “Hondo” was chosen. In the MCU, there’s usually an obscure connection between a project title and a working title. “Hondo” is the name of a famous western from 1953, starring John Wayne and Geraldine Page. The cowboy aesthetic in some parts of Fallout: New Vegas certainly aligns with the Wayne Hondo movie in tone. And if the new show is set in the west, that makes even more sense.

“Hondo” could also refer to the city in Texas outside of San Antonio. It still has that cowboy vibe.  The town and The Alamo were one of the few that weren’t as damaged after the Great War. This idea jams with the rumor that the upcoming show has something to do with the Brotherhood of Steel.

There’s also never been a Fallout in Texas, even though Fallout lore has numerous references to the legendary Texas Brotherhood. The canceled Interplay game Fallout: Brotherhood of Steel 2, aka Vagrant Lands, was supposed to deal with this faction, but that didn’t happen.

What do we know about the plot of Fallout so far?

The logline above sums up the total of what we officially know. We don’t have any clue about the time period or, more importantly, the location of the series. The show could be in the Capital Wasteland of Fallout 3 or the land of the NCR in the Mojave of Fallout: New Vegas.

Walton Goggins of Justified and The Righteous Gemstones has been cast as a Ghoul series lead. Ella Purnell of Showtime’s Yellowjackets will play a human named Jean.

Rumors continue to build that a third character, who sports Power Armor and is probably a member of the Brotherhood of Steel, will be the next cast member to be announced.

Who is behind the new Fallout TV show?

Fallout received a complete series order for the first year and will be on Amazon’s Prime Video sometime in the future. It’s a jointly produced production by Bethesda Game Studios and Lisa Joy and Jonathan Nolan’s Kilter Films.

Kilter Films is the husband and wife team behind HBO’s Westwold and Person of Interest. And Bethesda Game studios is the dev team currently responsible for Fallout in the gaming world.

Fallout is being showrun and written by Geneva Robertson-Dworet and Graham Wagner. There’s no word on who else is in the writers’ room or the number of episodes on deck.

Are you excited about filming for the Fallout TV Series? Please share your thoughts in the comments or with us on Twitter @MyCosmicCircus.

And if you like what you just read and have a few extra bottle caps lying around, please consider subscribing to our Patreon.