Ever since Margot Robbie’s Harley Quinn debuted in David Ayer’s Suicide Squad, she has been an undeniable fan favorite. Now that her most recent venture as the character has passed with James Gunn’s The Suicide Squad premiering earlier this month, here I’ll look forward and talk about where I want to see this character go in the near future.

Sometime around the development of Ayer’s 2016 corporate mess of a Suicide Squad film, they had begun development on a Gotham City Sirens film, seemingly because they were expecting the Harley to be a huge hit. Well, the critical reception to the film caused them to make some massive shakeups regarding DC’s future projects, and plans for any Gotham City Sirens project to the wayside.

But the fans yearning for such a project were steadfast, and every time a project featuring the character comes around — whether it be the Birds of Prey film last year or the animated Harley Quinn series around the same time — excitement for a Gotham City Sirens film would rise once again. Now, only a few weeks out from The Suicide Squad and less than a week out from the news that Black Canary would be getting her own project, fans are begging for the project once again.

While I’m not sure that the next Harley Quinn-focused film will be titled “Gotham City Sirens,” I think there is a lot of really great ideas that come from those stories — most prominently, anything involving Poison Ivy. If I could only have one thing for the next Harley Quinn story in the DCEU, it’s the exploration of her relationship with Poison Ivy.

While I’m not familiar with the use of the two characters in the comics, I was fortunate enough to fall in love with the duo while watching the Harley Quinn animated show only a couple of weeks ago. The show analyzes Harley’s brain very thoroughly, even at one point quite literally going into her conscious via Dr. Psycho, and for over two seasons and 20 episodes developed the relationship between Harley and Ivy. Even if the first movie wasn’t a full-on love story (it probably should be), you could still develop the two’s relationship over multiple films — colleagues to friends to girlfriends. It would be nothing short of incredibly fun to watch these two play off of each other and for Margot to finally get to portray Harley in a healthy relationship. 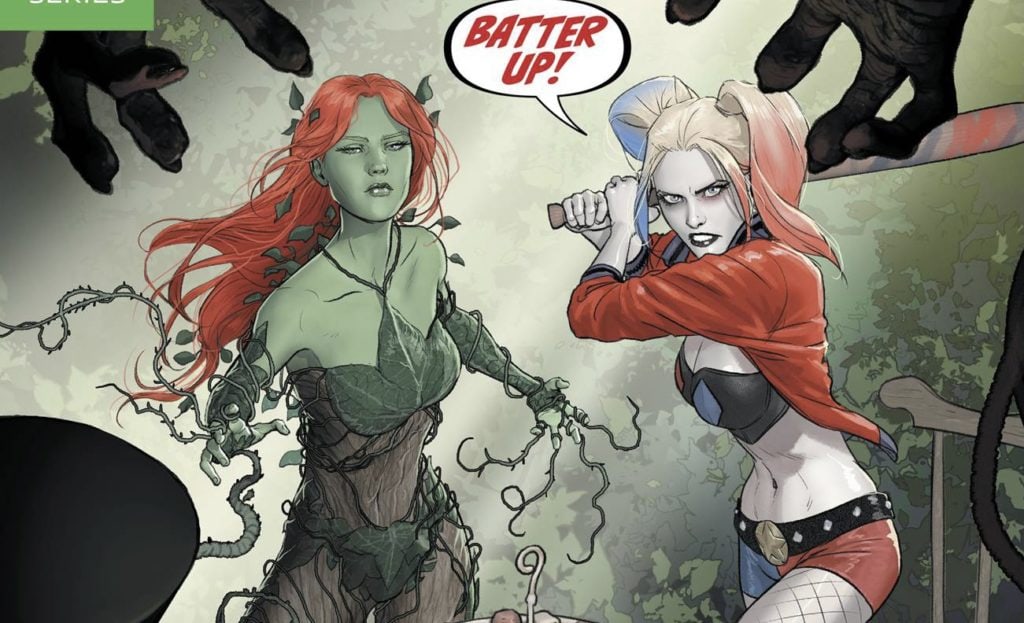 In a normal relationship, it would be that moment after a couple breaks up they have to meet up to swap all of the stuff they left at each other’s house. But here we would trade hair ties, scrunchies, and t-shirts for guns, hammers, and clown cosplay. And naturally, in a story where Harley grows out of her shell and moves on, it would be a great time to analyze her past relationship. Maybe we could see a story that has Ivy and Harley teaming up to take down the Joker for a common goal, but along the way sparks fly between the two and Harley kicks up some nasty memories regarding her and Joker’s past.

Given the recent news regarding Black Canary and fellow comic book Bird of Prey, Batgirl, I’d love to see the group of Gotham heroines make an appearance alongside Harley once again. They had an incredibly fun dynamic the last time they appeared together, and I think it’d be fun to see the anti-heroes cross paths with the more straight-arrow heroes and be forced to clash against each other.

One of my favorite things in every Batman-related adaptation that I love unabashedly is Gotham City. I usually am pretty critical of it, but I almost always love it for one reason or another. Even in Christopher Nolan’s trilogy, it serves its purpose — to ground Gotham and make it feel like a town you could live in. But the interpretations of the city that I love most are the ones that get absurd and cartoonish. The kind of city that you can’t imagine seeing in the daytime, that could exist in perpetual nighttime or clouded overcast. I’m talking about Arkham Knight’s Gotham City.

Arkham Knight, despite its (plentiful) flaws, is one of my favorite games of all time. If nothing else, the sheer visuals alone are enough to make me fall in love, but the way Gotham acts in the game is incredible. You feel like at any time you could turn a corner and run into another villain and I want to see that portrayed on film. Let’s see Ivy and Harley get caught up with the Birds of Prey. Let’s see them get captured and have to escape a temporarily aligned Penguin and Two-Face. Let’s see them face down the Joker and his army of goons in a cartoonishly large and colorful set-piece. Let’s have some fun.

Something else I would love to (finally) see is the development of Harley and Joker’s relationship. While I know that a lot has seemingly happened between the two, it always seems to happen off-screen. They portrayed the beginning of their relationship in a few short scenes in Suicide Squad and they show Harley deal with the fallout of their relationship in Birds of Prey, but we never get to see that final confrontation.

There is a whole world of creativity inside Gotham City and a whole lot of characterization for Harley Quinn and Poison Ivy to go through. I would love to explore that world through the lens of these characters and watch them evolve in front of our eyes. There is a lot of potential for a project like this, and I hope to see it reached someday.