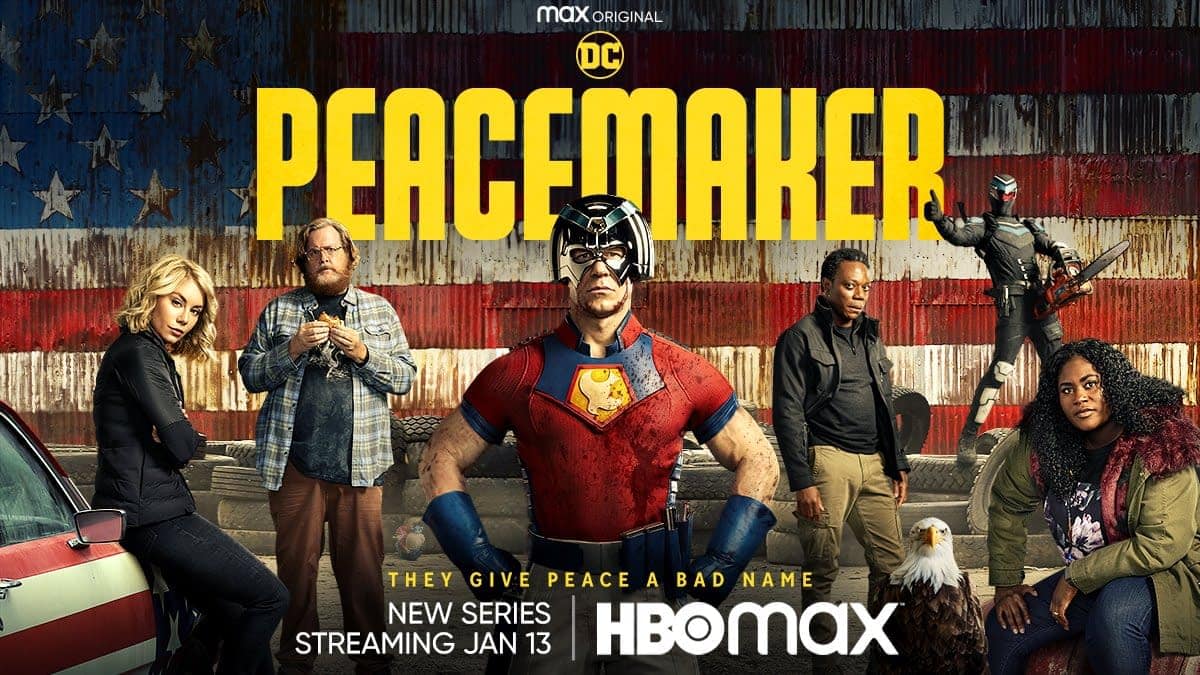 Peacemaker is back and with a vengeance. James Gunn turns the dials all the way to up 11 and brings the raunchiest, weirdest, and potentially most impactful DC project yet. The first three episodes were released at once on HBO Max and that release strategy seems purposeful.

The first two episodes lay a lot of groundwork and spend a lot of time getting into the groove of things, but James Gunn shakes off the growing pains and the third episode hits an incredible stride. We’re now a little under halfway through the series and I’m dying for more.

[Spoilers for the first 3 episodes of Peacemaker below!]

Peacemaker aka Christopher Smith (played by John Cena) is pretty quickly given some fun characterization and enlightening depth. A quick trip to his father’s house gives a lot of perspective to the reason why Chris is how he is and immediately gives the audience a reason to root for this character that I really didn’t want to root for.

Chris’s dad, Auggie is racist and homophobic, and it’s hinted that he could’ve been physically abusive on top of the fact that he was almost certainly mentally abusive. He’s bottom of the barrel and you start to see the seams in Chris’s persona. It’s almost heartbreaking if he didn’t continue to act like an asshole every once in a while. But that’s kind of the charm of all James Gunn characters.

The characterization of the rest of the supporting cast is really stellar and they’ve set up lots of possibilities for where the show can go. Both Harcourt and Adebayo also have relationships with their parents laid out. Harcourt claims that her father got her a gun for her 13th birthday and that’s what began her career.

Adebayo on the other hand has probably the most interesting dynamic with her parents of the entire show. Chris is in denial of the fact that his father is a piece of shit and still wants his approval regardless of that fact, but Adebayo has yet to be enlightened of the truth about her mother: Amanda Waller.

I’m appreciative of how the show handled this because of recent shows. I’m not going to name any names, but recent series have gone the opposite route, where they’ll save the reveals for the end of the series as some sort of twist instead of letting these things play out. Here, we learn upfront that Adebayo is related to Waller, and while the rest of the cast talks about Waller’s damned past and nasty choices, she’s slowly learning. It’s an interesting dynamic that leaves room for lots of development.

The villains of the film so far have been set up as “Butterflies” which sounds right up Gunn’s alley. It also feels very similar to Starro in the sense that they are an alien kind that has descended upon Earth for some reason.

They also seem to have some tech that looks an awful lot like Blue Beetle’s scarab so I guess we’ll see where that goes. I just really love to see a director work in their zone, and that’s clearly where Gunn is. It’s a super comedy, with super violence, and super sex – just what you’d expect from the guy that made Super. And he’s running at top speeds with this series.

That doesn’t mean the series is perfect. They clearly had a lot of fun making it and that shines when the comedy gets going. But there has been more than one occasion where I felt like bits were going on far too long.

Specifically, in the scene where Vigilante makes his first appearance, he interrupts Chris having a little bit of a mental breakdown. It’s a funny moment that cuts through the emotional tension in a very Gunn way but it also then talks about Louis C.K. for like 3 minutes too long. It was kind of brutal. But there is also a bit later about the “Berenstain/Berenstein” debate and that one was kind of fun. The comedy was pretty hit or miss and I hope that the rest of the show has more hits than misses.

Peacemaker has been great so far and there has been a lot to love. Great characterization, interesting plot, all-around fun times. I will definitely be tuning in for the rest of the show and maybe you should too.

The first three episodes of Peacemaker are now available on HBO Max. Check out the official trailer below! What did you think of Peacemaker? Let us know in the comments or on Twitter @mycosmiccircus!