New York Comic-Con has come to a close and on Sunday the team behind the CW’s The Winchesters helped give fans their grand finale. We spoke to Drake Rodger and Meg Donnelly, about the casting process and how the young actors landed the coveted roles of John and Mary.

In addition, the soon-to-be breakout star Drake Rodger had quite a story of destiny involving a very notable song that you’re going to want to read if you’re a Supernatural fan. The Winchesters cast at NYCC shared all of that plus insight on what shenanigans might go on their blooper reel!

If you’re not familiar with it, The Winchesters is a prequel to the hit show Supernatural. It’s set in the 1970s – complete with groovy costumes, sets, technology, and of course, music. The show follows John Winchester (Drake Rodger) and Mary Campbell (Meg Donnelly) as they “put it all on the line to not only save their love but the entire world.”

It also stars a “Scooby Squad” of original characters, including Latika (Nida Khurshid) and Carlos (Jonathan “Jojo” Fleites). For a review of the first episode of The Winchesters, check out Luna Gauthier’s review! 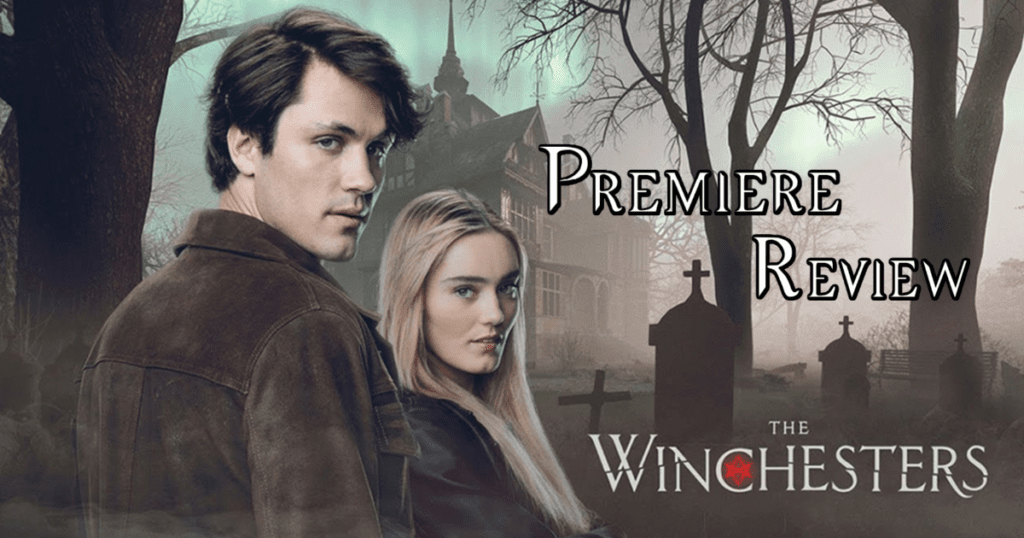 The Winchesters’ connection to Supernatural

Supernatural, the “mothership,” ran for 15 seasons and hundreds of episodes on the WB and later the CW. It followed two brothers – Sam (Jared Padalecki) and Dean (Jensen Ackles) as they investigated things that went bump in the night (and day), all while driving around in a gorgeous black 1967 Chevy Impala. They took on everything from vampires to the devil, all while, at its core, it was a show about family.

[Please note – There are mild spoilers ahead for Supernatural.]

When word got out about the prequel, some Supernatural fans were miffed. In the show, John Winchester (Jeffrey Dean Morgan) and Mary Winchester (Samantha Smith, Amy Gumenick) have pretty hefty storylines predicated on the idea that John didn’t know about monsters until after Mary died.

According to lore, he became a monster hunter after a demon killed Mary, sometime after Sam was born. The inciting incident to the brothers kicking off their journey in Supernatural was that their dad John Winchester was missing after going off on another “hunting trip.” For a complete list of appearances of John and Mary in Supernatural, check out Brian Kitson’s viewing guide!

Because of this deep lore and mythology of the show, Supernatural fans were skeptical about The Winchesters. The team behind the show has gone to great lengths to reassure fans about their commitment to continuity, and part of that was ensuring that they had the right Mary and John.

The Winchesters cast at NYCC: The full roundtable interview of Meg Donnelly and Drake Rodger

Interviewer: So let’s start with kind of a simple question. We know who your characters are, but sort of tell us about this version of the character.

Drake Rodger: Yeah, yeah, we have 15 years of Jeffrey Dean [Morgan] and Samantha [Smith]. Right. So that was kind of a challenge that we’ve been trying to tackle, there’s no way we’re gonna be able to tell that version of the character as well as they did. So how can we give context to the characters without changing anything but giving our own space to it? So yeah, we get to see a little less developed, but less emotionally available, if you can believe it.

Meg Donnelly: Yeah. No. Yeah. I agree with everything you said.

Interviewer: Drake, you’ve said in interviews that you knew immediately what angle you wanted to bring to John. Can you tell us a little bit about that angle? And what is it that you’re hoping fans see in your portrayal of Mary?

Drake Rodger: Yeah, well, with John. Like I said, I watched the show 12 seasons as a kid. So I always knew the character. And when I was younger, I’d never understood like, he was viewed as a bad parent. I never saw it that way. And then listening to a podcast with Jeffrey Dean Morgan. I saw what he was saying about he didn’t, he didn’t play him like that.

And I think what I was excited to do was to show like. Uhh… season one, episode 20, there’s a whole quote of like, this isn’t what John wanted for himself. It’s not what he ever wanted for his kids, certainly not what he wanted from Mary. So I wanted to tell like, hey, this isn’t what I wanted for myself, this is something that I was destined to do, and had to do, it was out of my hands. And I just, you know, so I’m excited to kind of show like, this is the life I wanted for myself. And then like, we all love Supernatural. This is who you had to have, like, you had to have this horrible version of Jeffrey Dean to get 15 seasons of Supernatural.

Meg Donnelly: Yeah, I think for Mary, having so much more context of how she was raised a hunter, that’s all she’s ever known. And she knows exactly what she wants. She’s like a natural-born leader, strong, independent, a girl fighter. So having all of these amazing scenes where she’s just like, kicking butt. I think it’s going to be really awesome for fans to see, and especially a young girl like Mary who you wouldn’t expect it at all. I think is really important. Because it kind of just shines a light that like girls can be badass, too. And I think fans are really going to like it, hopefully, fingers crossed. Yeah.

Interviewer: Can you talk about the casting process for this show? How did you guys get the call? How did you find out? What were your reactions?

Meg Donnelly: Yeah, well, um, I got an audition for it. It was a prequel to Supernatural. And I was like, Whoa, that’s kind of that’s wild. And in reading the script, I thought it was so beautiful how they touch on such amazing topics, but then have such fun action scenes and so much action. And kind of see how John and Mary… kind of just context between the characters and how they meet for the first time.

But it’s so new and exciting. And after reading the pilot, I was like, what happens next? So yeah. And then doing the chemistry, it was always really fun. And I feel like we clicked instantly… Even though he’s so gross… No, he’s great. Yeah, and the chemistries were awesome. And yeah.

Drake Rodger: Oh, yeah. I went through… Gosh, 30. Close to 30 hours of chemistry reads. Yeah, like chemistry testing. But I didn’t hear, so we did nine different sessions. I didn’t hear that I got in until session seven.

So it was like a bunch of mental games that we play with yourself. Why am I here? They’re just playing with me. They don’t like me. And the whole time you find out it’s a different story. So that was yeah, that was mine.

So when I found out I got a call right before the eighth table read. And I got the call beforehand. Now it’s like, well, if they were gonna tell me I’m not cast, or then, after, or during… So when I answered it, I was like, crap. Like they’re seven sessions. That didn’t happen.

I cried, called my mom. On the way to the test though, on the way the test, I kid you not, “Carry on My Wayward Son” came on the radio. Like on the way, and I was like this is just meant to be, and I just felt so relaxed.

Interviewer: That song has a way of doing that.

Donnelly and Rodgers: It really does.

Interviewer: So on that, basically after you guys get together and the show [Supernatural] is well known for a lot of the sort of blooper reel materials that we’ve seen, the fun that people have on set. Is there anything that you want people eventually to see, like the kind of friends, like joking around?

Meg Donnelly: I hope that people get to see our bloopers. Oh my goodness, we have so much fun on set. And it’s always the most important serious days that were the most giggly. And yeah, this guy, every time he always is making silly faces behind the camera, but it’s so much fun. I’m trying to think… if like…you prank us all the time too.

Drake Rodger: Yeah I… people love doing scenes with me. Because I grew up watching- like I would watch the YouTube clips [of Supernatural bloopers]. Our showrunner told me, he’s like, one of the things we really want to do – I forget the name of it, but there’s a whole section of Warner that specifically does Supernaturals bloopers and like, releases them professionally. And he’s said that they were gonna do that for our show, too.

Meg Donnelly: Cool. Oh, that’s gonna be so funny. I wonder if they got when you’re doing the punching bag scene (laughs)

Drake Rodger: Ripped. I thought we were off camera and just like… huge fart. Lotta gas!

Meg Donnelly: I laughed so… oh, my god. That was so funny. I really hope so.

Interviewer: Got in on camera

Where and when to watch The Winchesters for more

You can see the premiere of The Winchesters on Tuesday, October 11th, at 8 pm EST on the CW and stream it the very next day.

Are you a Supernatural fan excited about the series, or are you new to the family? Check out our detailed viewing guide and then cruise on over to Twitter to join the conversation with us at @MyCosmicCircus.