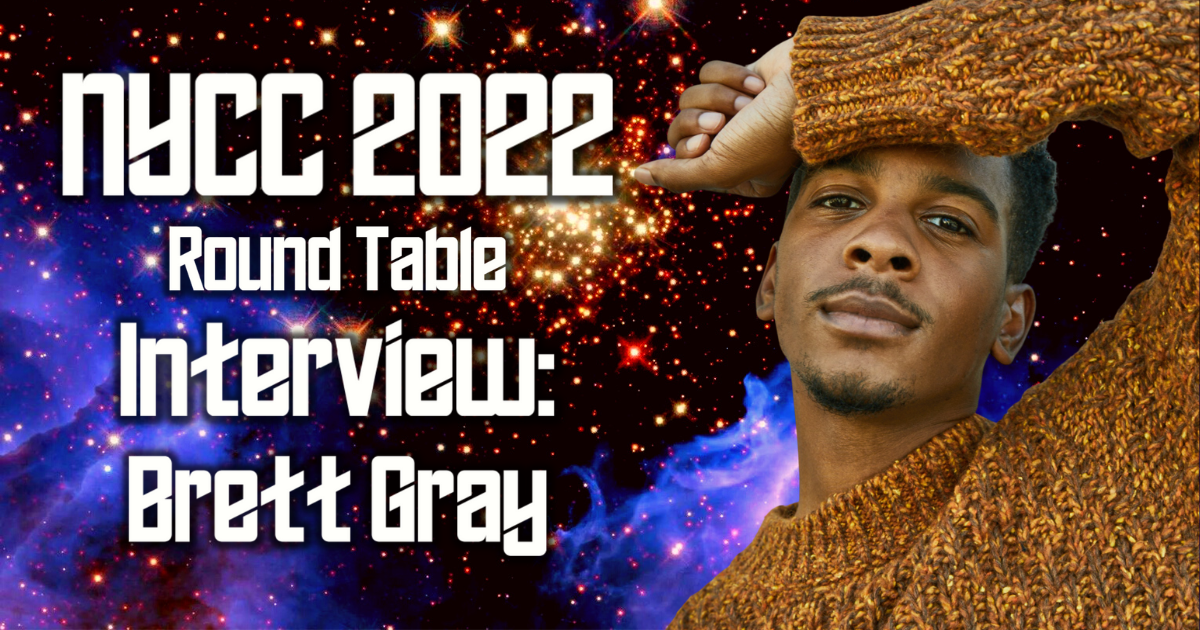 NYCC has come and gone, but we’re still beaming with joy after transporting to Javits Center to celebrate all things Star Trek at the Star Trek Universe panel. During NYCC, we chatted with Star Trek: Prodigy actor Brett Gray (who voices Dal R’El, or Dal for short) about the show and his character. He spoke about what it was like attending his first large con as a Star Trek cast member and the appeal of Prodigy to Generation Z.

Dal R’El: A new captain for a younger generation

Brett Gray is a newcomer to Star Trek but radiates charisma as he embodies Dal R’El, the “captain” of the young group of kids that make up Prodigy’s core characters. A Philly native, he started acting young in a performance at Philadelphia’s hallowed Academy of Music. The multitalented Gray is also a musician. Gray wasn’t always a Star Trek fan – he spoke to us about his fresh take on the franchise at NYCC and what he brings to Prodigy.

[Note: Please be aware there are mild spoilers for Star Trek: Prodigy below. Interview excerpts have been edited for clarity.]

If you’re not familiar with it, Star Trek: Prodigy is one of the newer titles in the Star Trek universe. It’s animated and geared toward younger fans. Given that one of the places you can watch it is on Nickelodeon, that makes sense. It’s a bridge between generations of fans and has stunning animation and drama that will entice kids while also being entertaining to adults.

It also breaks down the more significant concepts from Star Trek – like what it means to be a member of Starfleet and what the prime directive is – into kid-appropriate bits. As the Protostar kids learn about Starfleet, so does the young audience. The way into the show is through its main characters. They’re “kids” from the mining colony of Tars Lamora that escape their captor, the Diviner (John Noble), when they find the crashed Starfleet ship USS Protostar on the settlement. Escaping the colony is only the start of their adventure – they’re pursued by the Diviner and have a ton of growing to do.

The Protostar’s crew cast is heavy with talent – including Dal (Brett Gray), Gwyn (Ella Purnell), Jankom Pog (Jason Mantzoukas), Rok-Tahk (Rylee Alazraqui), and Zero (Angus Imrie.) In addition to those names, Star Trek legend Kate Mulgrew recurs as both Admiral Kathryn Janeway and the training hologram Janeway. Jameela Jamil, of Marvel’s She-Hulk: Attorney at Law, is also a crewman on Janeway’s ship, who, according to our interview with Jamil, has a mysterious past.

Gray’s character of Dal R’El is a bit of a mystery, too. He’s the de-facto leader of the kids and has a lot of growing pains as he tries to be a leader worthy of what he thinks is Starfleet. He even takes the famed Kobayashi Maru and, like other captains past, fails. But we don’t know what his species is or who his parents were. With the other kids, their origin species is pretty adorably clear and is flat-out said as we open the second half of season 1.

On Dal’s growth this season of Star Trek: Prodigy

Gray was asked what the biggest change in his character was as the season progressed. He responded:

“I’d say he’s much more of a leader than before. You know, I think Dal kind of gets a bad rap sometimes. Because he was dropped off as a child on a child labor mining planet and forced not to speak to anyone. And I think that can be very hard for somebody and you know, for him to come and learn how to empathize with other people. And build a team and become a leader. I think that’s the biggest change.”

One interviewer pointed out that NYCC is one of the first big cons for the show since coming out during the pandemic, and asked Gray how it feels being able to see the fans of the show in person.

“Yeah, it feels good. I still haven’t gotten to explore or do anything yet. So I’m excited for when everything dies down, so I can like go sneak outside. But yeah, it’s really cool. You know, the first time we were here, we were sort of premiering this story. And now that we’re here, there’s so much feedback on Twitter. Ella [Purnell] showed me a subreddit the other day all about Prodigy and stuff.

So it’s been really cool to see how people are reacting to the show. And, like, witness our own little mini fan base kind of starting to carve out of the, you know, whole Star Trek franchise. So yeah, it feels cool. It’s very, it’s a privilege and an honor. Because, you know, you hope when you jump into something as big as Star Trek that it’s, you know, you get to make your mark.”

On Dal R’El‘s origin and leadership

Gray was asked if he had any headcanons with regard to Dal’s identity and ideas about the character’s journey of self-discovery which seems to be an important theme in Prodigy.

“Dal has been looking for who he is, who his parents are, where he comes from, what his purpose is since the beginning of the series. So that’s all going to get to be revealed in this next part of the season. And he’s going to have to face it, which is hard for anybody, I think, to meet or sort of figure who they are out.

But yeah, I feel like, for Dal, it’s been imperative for him to learn who he is because it’s hard for him to have sort of a model of how he’s supposed to be, or where he comes from, or what his purpose is in the entire universe. And it can be hard not seeing yourself around. And I think I relate to even just as an actor, sometimes, not seeing a lot of myself on screen. And therefore, you don’t really know which parts to play or where you fit, or how to speak to people. And so I think for Dal especially the position that he’s taken as captain, it’s gonna be a tough reality, to come to terms with who you are, and to be able to accept that and figure out what to do with it after that, especially at such a young age.”

On Gray’s fresh take on the role

The actor was asked about his preparation for his Star Trek: Prodigy role considering the size of the franchise and some of the bigger themes in the shows.

“You’re not gonna like this answer. I tried to barely prepare it all. You know, I was really nervous coming into it. I thought, maybe I should watch every Star Trek. And I should go learn about everything and see who people are and things like that. And as I was reading the scripts for the first season, I realized that I could discover this all as myself with Dal.

And so I don’t know if that was the right way to do it. But I feel like it’s freed me up so much. I remember my first Captain’s log. I don’t know if you’ve heard any of them that I’ve done on the show. They’re getting better. But when I first started them, it was super flippant. And the producers loved it, they thought, ‘Wow, these are usually done very matter-of-factly, and super seriously. Did you choose to do that?’ And I was like, I don’t even know what a captain’s log is.

I think in some ways, it’s freed me up to bring some freshness and to bring some life into these characters in a different way than we’ve seen before. And also, it’s helped me to better chart Dal’s growth. Because if I don’t know, and Dal doesn’t know, then as we both learned together. I can inject that into my performance, you know, so I tried not to watch anything.”

On Trek’s appeal to Generation Z

Another interviewer asked the actor how he thought some of the bigger messages in Star Trek would resonate with Gen Z.

I think it’s a really cool way to sort of introduce young people to the mindset of what, you know, our collective consciousness would be. Especially in the world right now, it’s kind of, it’s kind of bleak, you know, sometimes it can get, it can get kind of rough, it could get kind of limiting. And I think, you know, the freedom of people and the needs of the many outnumbering the needs of the few is an important thing for everybody to start learning and employing more at any age.”

Lastly, Brett Gray was asked to tease a bit about what to expect in the rest of the season for Dal R’El in Star Trek: Prodigy and what he’s most excited to see.

“I’m most excited for people to see Dal’s origin story. I think it again tackles one of the last prejudices I think, even of Starfleet. And I think it’s going to be a big moment in the Trek Universe for momentous change. So yeah, yeah. Thank you.”

New episodes of Star Trek: Prodigy beamed down to Earth on October 27th. You can watch them now, however, you must receive your transmission on Paramount+. If you’re still on the fence, check out our review of the first of the new episodes. And make sure you follow along for further Star Trek coverage.

Are you excited about Prodigy? Please join the conversation and share your thoughts with us on The Cosmic Circus Discord or on social media!

NYCC Interview with Kate Mulgrew about her role in Star Trek: Prodigy