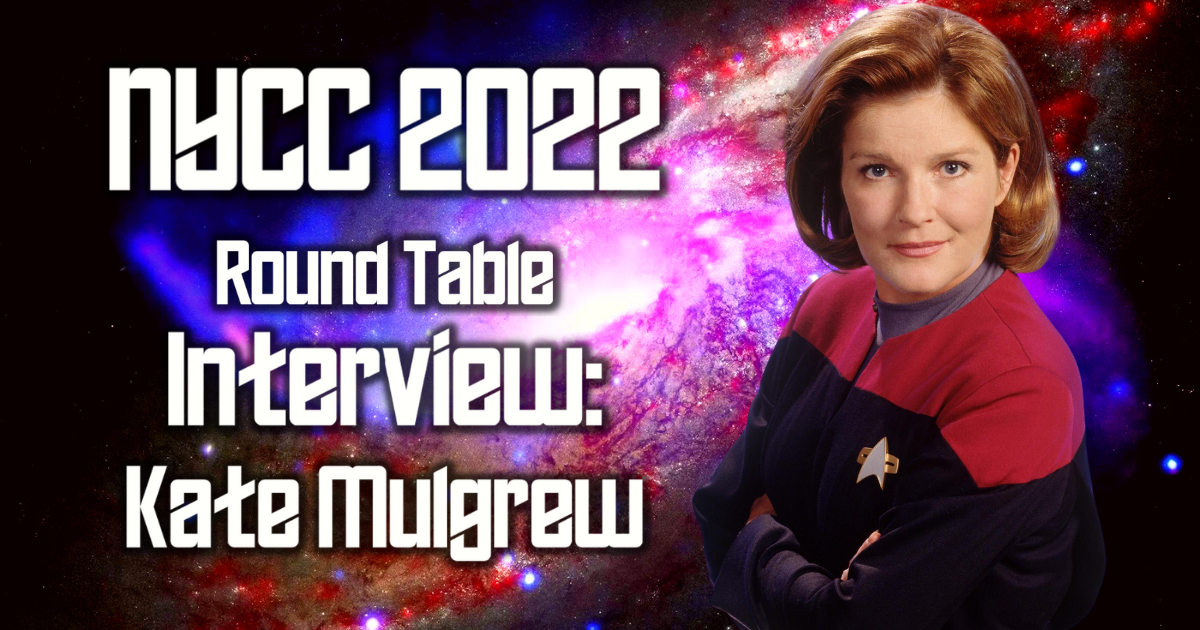 We sat down with the cast from the delightful show, including Star Trek legend Kate Mulgrew, who famously played Captain Kathryn Janeway and is once again lending her voice talents to the franchise. In a roundtable interview, Mulgrew talked to us about bringing a new spin to a character she’s played and going back into the studio to work.

[Note: There are mild spoilers for the first half of the first season of Prodigy ahead.]

A new Janeway for a new Star Trek.. kind of

At least at first, Janeway in Star Trek: Prodigy isn’t precisely the Janeway we remember from Star Trek: Voyager. Through the first half of the first season, she’s a training hologram on board the salvaged USS Protostar. She’s based on the Janeway that defeated the Borg and Species 8472, but her empathy is enhanced. The hologram Janeway, after all, is supposed to teach cadets the ways of Starfleet. And in a way, this parallels some of the overall purposes of Prodigy by being more accessible – this is a Janeway for younger Star Trek fans, and she is kid-friendly.

Holograms based on humans having different personalities than their designers and namesakes are not a new phenomenon. Consider the differences between another famous hologram – the Voyager EMH (Robert Picardo) and the human he was based on, Dr. Lewis Zimmerman. The EMH was adjusted because he had a job to do, just like the training Janeway hologram.

The kids, led by Dal (Brett Gray) in Prodigy, meet Janeway first in hologram form at the end of the second episode, “Lost & Found II.” After their dramatic escape from Drednok, the escapees bit aimless. The hologram greets them after the Brikar Rok-Tahk (Rylee Alazraqui) accidentally activates the training hologram at a fortuitous moment – and from then on, she helps introduce them and guide them on Starfleet’s ways.

The real Janeway comes into the show at the end of the first half of the first season. She’s Admiral Janeway, and she’s on a mission to find out what happened to the USS Protostar, specifically its captain – her old friend and crewmate, Captain Chakotay. The crew of the Protostar still haven’t met her yet, but judging by that cliffhanger, it’s a good bet that they will meet each other soon.

The show’s mid-season finale “A Moral Star, Part 2″ left us with that situation. Kate Mulgrew chatted with us about this and more at NYCC.

[Note: some quotes have been edited for clarity while retaining context.]

When asked how she approached Janeway’s transition from being “captain-mentor” to just a mentor, Mulgrew replied:

“It took some adjusting, of course. It’s a hologram we’re talking about. Correct. So the challenge was, how do I endow this hologram with interesting tricks without making sort of a cardboard copy of what once was. So I very slowly, but suddenly tried to place humor. Even some degree of discernment. She likes some, she doesn’t really trust others’ opinions. And I’ve developed that slowly.

But I’ve tried to ground her. She gets this barometer, hologram game, like Vice Admiral gives this. So I’ve just run the gamut when I’m given that shot. And often I have scenes where they’re back to back. So I get to switch on and switch off, which is really challenging and really fun.

Hologram Janeway is a little lighter in tone, so that the children are listening to me with a certain degree of comfort. Because I think if you deepen it, and you go to the Admiral, you’re going to turn them off. Right? But you lighten it, even in your command, and say, “You do that again, you’ll pay a price for that.” So I have to do this well, according to what’s going on in my imagination, but fun. You’d be surprised at the freedom in the booth. Freedom.”

On separating the personal and professional for Janeway

Q: I’ve always felt that Janeway’s commitment to personal relationships, and also traditions are always… it’s hard for me to tell which one is stronger than the other. In your search for Chakotay, how much of that is personal? Is there a bigger mission?

“Well, that’s already very astute. Because this is the essence of Janeway. They’re inseparable. Her investment is always personal. Even if it’s species 8472, who she loathed. In the end, she sort of felt sorry for them. Look at Seven of Nine, how deeply personal and in short order.

On working with the Hageman brothers and voice acting

Mulgrew was asked to compare the seeming loneliness of voice acting with working on a soap opera or other live-action shows with a large cast.

“Oh, it’s much, much easier. And it’s very freeing, very liberating. And I’m collaborating with Kevin and Dan Hageman. Not only genius-level creators or writers, but they’re so good, decent men, that when I’m working with them, I just feel that I could do anything. And that we’re in it together. And I’ve seldom felt this level of collaboration. Because in live-action, it’s very intense.

Even Orange is the New Black where there was a lot of stuff going on, it was hit your mark, cut, print, moving on. You get to take maybe at most two takes. Here we work we play, can I get another one? I’d like to try this. They never say no. And they always say try this though. Let’s go here. And it just makes a great.

It’s me with those guys. And it’s fine. I’m living within the confines of my own imagination. What’s wrong with that? That’s my job anyway. Usually, the audience is there to enhance it in some way or another, and on a soundstage – the camera acts as that. But I have to use my own judgment, my own mind. And for some reason, it’s just it’s very confidence-instilling. It’s very relaxed. I mean, I can really feel like I can go anywhere.

You know, when you walk on the stage in front of 1500 people, which I’ve done a lot in my life, there’s a nervousness that constricts the diaphragm. So that even if you’re playing Clytemnestra, [does voice] “it can sound like that.” Do you know what I mean? In the sound booth, there’s nobody there. So I’m relaxing. It’s flowing through my vocal cords, the larynx is free, my jaw is relaxed, and I can go up, I can do down, I can go over. And the motion comes is very, very easily.”

On the cross-generational appeal of Star Trek: Prodigy

Kate Mulgrew was also asked her thoughts on her character now helping to introduce a new generation of fans to the Star Trek universe.

“But of course, who else could it be? She’s a great choice. They were smart. Smart to ask me. Because he, I think he understood something that even I could not see. But which is why he’s the visionary now and has assumed the mantle or the franchise. I think he knew that the mother would say to the child, five-year-old child, we’re going to watch Star Trek: Prodigy and I’m going to tell you who that person is. The child’s going to understand it as hologram Janeway but the mother’s going to support it with her knowledge of Captain Janeway. So the whole thing is just… I think that was the intention to make it a cross-generational passionate conversation. And that will be an extraordinary accomplishment.”

On bringing something new to the holographic version of Janeway

Of course, Kate Mulgrew had embodied Janeway long before Star Trek: Prodigy. She was asked if there’s anything that she tweaked about the character for the new series, that wasn’t quite there initially in Prodigy.

“Of course, of course… When I say the Hageman’s are completely collaborative, they know that I created Kathryn Janeway, so they’re not going to tell me how to bring this hologram to life. And I think after I finished tweaking the animatics, for physical being, and I did play a big part of that. The humor.

As I said to you earlier, a little bit of, not softness, not tenderness but empathy. This hologram has empathy for these kids. I mean, they’re all in trouble, especially Dal, who has suffered, arguably more than all of them put together. And so hologram Janeway’s going to have to really exercise her diplomacy and her wisdom when it comes to dealing with a guy like Dal. Who was so sure he’s going to die, that he does everything to, you know, upend it. And so it’s a very good – again, it’s the personal investment. But it has to be always grounded in the fact that I’m there to teach them Starfleet skills. The Prime Directive. Take each other’s hands and let’s get going. You can’t do this alone. If only we knew that as a species, but we don’t know how to do we? We cannot do this alone.

You can watch the new season of Star Trek: Prodigy on October 27. You can watch it, as well as any of your other favorite Star Trek series on Paramount +.

Are you excited for the second half of the season of Star Trek: Prodigy? Please join the conversation and share your thoughts with us on Twitter @MyCosmicCircus.You can also check out our discord if that’s more your warp speed.