Report: A Nova Project is in Development with ‘Moon Knight’ writer Sabir Pirzada Report: A Nova Project is in Development with ‘Moon Knight’ writer Sabir Pirzada

After many months of rumors, Deadline confirmed today that Marvel Studios is developing a new project about the cosmic peacekeeper Nova. Details about the project are under wraps for now, but rumors say it will be a limited series for Disney+. Sabir Pirzada, a writer on the upcoming Disney + project Moon Knight, will be writing the project.

While unknown whether it would be a movie or series sources say likely to be limited for Disney+ https://t.co/7VLtwVTMgK

The news comes after years of yearning by fans for a live-action appearance for Nova. The planet Xandar, the capital of the Nova Empire, was in Guardians of the Galaxy and later during Avengers: Infinity War. The appearance left many fans speculating that we would soon see the superhero. And considering that the MCU is pushing deeper into the Skrull comic lore with the upcoming Disney + series Secret Invasion, a project about Nova, who has had many Skrull run-ins, makes sense.

According to the Deadline report, this Nova project will be about Richard Rider. There’s no mention of Sam Alexander as of yet, but that doesn’t mean we won’t see that incarnation of the character as well at some point. Needless to say, we’ll be on the lookout for more information about this very exciting and much-anticipated Marvel project! 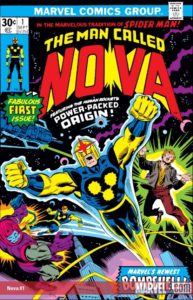 Richard Rider’s Nova first appeared in the comics in September of 1976 in Nova #1 – The Man Called Nova. In the comic origin story, a human high schooler named Richard Rider gets a cosmic infusion of Nova-prime superpowers from a dying Nova Centurion named Rhomann Dey. If the name Rhomann Dey sounds familiar, it’s because we saw the character, played by John C. Reilly, in the Guardians of the Galaxy.

Dey is pursuing the evil Zorr the Conquerer, who destroyed his planet as he hurtles through space. The Centurion passes by Earth when he starts to succumb to his injuries.

Unable to continue, he sends his powers to Richard via emerald beam and tasks him with defeating Zorr. In classic comic book fashion, Rider has a bunch of self-doubts but eventually comes to terms with his new powers and decides to use them for good. He ultimately has a showdown with Zorr to defend Earth, ending with Zorr’s defeat.

Of note, Sabir Pirzada is a home-grown talent by Disney. The screenwriter was one of 10 screenwriters to be selected and go through the highly prestigious 2018 Disney TV Writers Fellowship. Before he wrote for Moon Knight, he was a writer and story editor on the CW reboot of Roswell, New Mexico. Pirzada was also a writer on the hit-show Person of Interest with the director of the upcoming Fallout show, Jonathan Nolan. Pirzada is the author of a Ms. Marvel comic from last year in Marvel’s Voices: Identity in the comic world.

Are you excited about seeing Nova in the MCU? Please share your thoughts in the comments or with the team on Twitter @MyCosmicCircus.