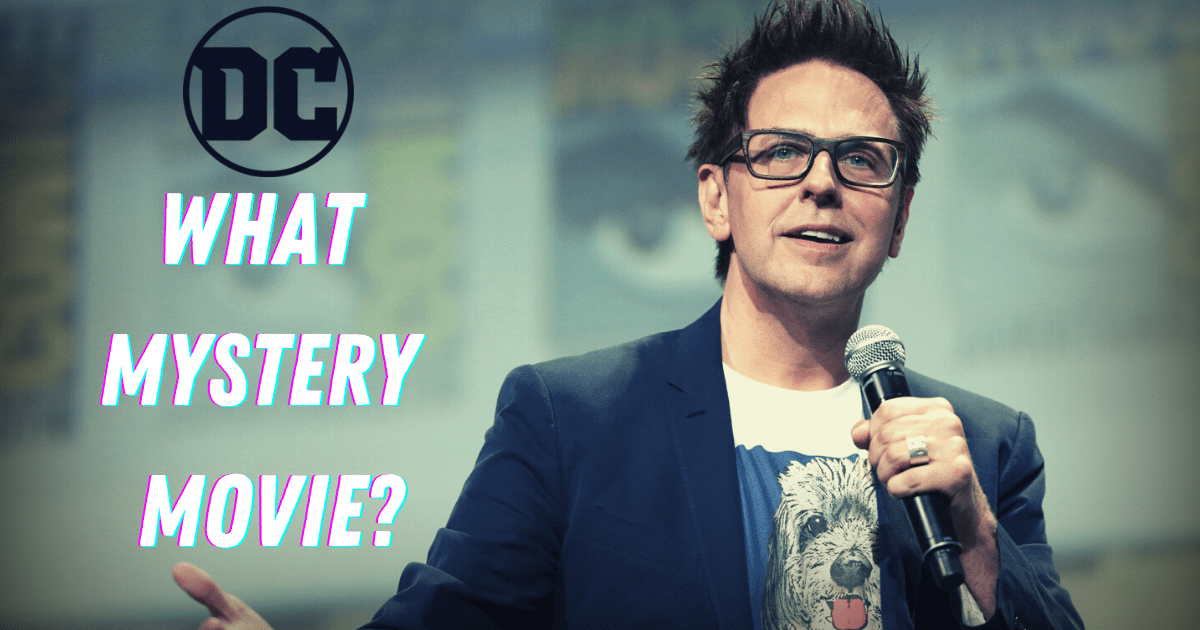 While it’s known that James Gunn will continue making films for DC, not just the Peacemaker series for HBO Max, we don’t know what his next DC film is. As THR recently reported, “Sources tell THR that Gunn and producer Peter Safran are in talks with Warners for a mystery movie, possibly more, that Gunn would tackle.” But what could that or those projects be? [Update 10/25/22: The Hollywood Reporter has revealed that James Gunn and Peter Safran are to lead the film, TV, and animation division as co-chairs and co-CEOs under DC Studios.]

Here are my top 10 picks for what those could be based on the strongest possibilities and on Gunn’s talent for creating movies that are well-received, no matter who they focus on.

Read on and see with you agree with my list or not. This list is in no particular order.

Deathstroke is a very interesting character from the DC universe. Depending on which origin story, he is either a mercenary soldier who works for the highest bidder or a trained assassin under the thumb of Ra’s Al Ghul. He’s better known as a villain or anti-hero who very often fights Batman, Nightwing, or the Teen Titans.

With Gunn’s style and the balance that typically accompanies it, the director could make a very fine psychological drama about the DCEU’s Slade Wilson (Joe Manganiello), whose potential has been squandered so far.

It could be a very serious kind of film where Slade Wilson is resurrected too many times from the Lazarus Pit, returns to his home confused at every turn, and his mind begins to sink into madness. Gunn has shown in Peacemaker that he can create a series about a bad guy, where at a certain point in the story we start to sympathize with him.

James Gunn is best known for assembling heroic teams in which each character gets equal time, origin, and development. He makes these teams so popular and successful, way more than one could expect, and that’s what he could do with Metal Men.

If you’re unfamiliar, Metal Men is a team of six advanced robots created by a scientist named Dr. William Magnus. Each of them represents different characteristics and superpowers.

While this team may not be one of the most popular, there’s still an interesting story to tell there. Although, perhaps without the need to be included in the larger DC universe. Think of it as a suggestion for a funny, dramatic, bonding family film that could begin to tell stories of lesser-known heroes as DC’s plan expands.

Charles Victor “Sage” Szasz is one of the most mysterious characters in all of DC. He doesn’t have superpowers but he knows martial arts and has very well-developed detective skills. Sage is very often portrayed as a paranoid conspiracy theorist, and sometimes as someone who might even be smarter than Batman.

I would like to see a detective film with elements of some personal drama of The Question sprinkled in. In a story similar to the comics, The Question could have cancer and be facing his own mortality, however, he needs to solve one final puzzle. His greatest puzzle to date. It seems to me that Gunn could create something like a family drama with some elements of humor mixed in with the heavier subject matter. This could be a story where Sage passes his mantle to Renee Montoya. It could continue Montoya’s arc from Birds of Prey or be outside the DCEU with a story on another Earth.

If you’re familiar with James Gunn’s filmography then you’ve probably heard of Super starring Rainn Wilson. It’s a film about a normal guy whose wife leaves him for a drug dealer, after which he decides to become a superhero. As for Plastic Man, it’s a similar case, but Plastic Man is working for gangsters, had an accident, and gained superpowers. When he discovered that he could do more good than harm with these powers, he began to act like a hero while balancing a normal life with his wife and child.

If Plastic Man is one of Gunn’s secret projects, I wonder what his idea for the story would be. We know he can surprise us with his interpretations of characters and that’s a good thing. Plastic Man has been a heavily rumored DC film for several years, so maybe the hero has finally found its director.

Booster Gold is undeniably one of the coolest characters in the entire DC universe. While he may not be a great superhero like Batman or Superman, he can definitely call himself a hero. This guy has saved the world hundreds of times just by traveling through time. However, we can’t forget that he also accidentally destroyed it many times.

A movie about Booster Gold would be great, especially since a Blue Beetle film with Xolo Maridueña is arriving in 2023. Booster Gold was better known for his interactions with Ted Kord’s incarnation of Blue Beetle, who was his best friend.

Maybe we’ll see a movie where he works with Kord, probably set in the past, and then in the near future, perhaps we’ll see him again in a sequel to Blue Beetle. Then Jaime and Booster could work together to stop one of Ted Kord’s old villains. No matter what film Gunn decides on, If it is Booster Gold then I stand 100% behind the idea.

Kite Man has recently become a popular character thanks to his regular appearances in HBO Max’s animated series Harley Quinn. He doesn’t have any superpowers, but he is a very skilled glider pilot who uses very different types of kites

Yes, I know it sounds very absurd, but a movie about him would have to be. You can’t have a very serious Kite Man, because he wants to be a big gangster-like Joker or Two-Face. Unfortunately for him, his lack of seriousness is very often his undoing.

Of course, we may get a movie about a more anti-villain Kite Man, but if it’s James Gunn’s mysterious DC film, I’ll be very curious to see what the director will do with it.

Many people are wondering what happened to 2016’s Suicide Squad and why James Gunn brought back only Harley Quinn (Margot Robbie) Rick Flag (Joel Kinnaman) and Captain Boomerang (Jai Courtney) in his version. This film could answer a few questions, while giving us a little redemption for the old squad, which is fighting a new team led by, let’s say, cyborg Rick Flag or something like that.

This could be a very big movie, well maybe not as big as Justice League or JSA level, but still a big event. It could be a very well-shot and written film about this great team. But the most important thing is the proper justification for the return of some of these characters.

The Amanda Waller series or season 2 of Peacemaker are great places to serve as a prequel to these events. Waller may get a new Suicide Squad to hunt down every person from the new team that survived the events from Gunn’s Suicide Squad movie, and to make up for the events of the Peacemaker season one finale.

Despite my strong dislike of 2016’s Suicide Squad, I would love to see Deadshot (Will Smith) and Katana (Karen Fukuhara) return for this pumped-up action film.

Adam Blake, or Captain Comet as he is commonly known, got his powers from a comet’s low-level radiation waves when it flew through the sky at the moment he was born in 1931. He grew up and to find he had superhuman powers such as super strength, invulnerability, flying, telepathy, and super speed. It was then that he decided to become Captain Comet and help stop criminals and protect Earth from alien invasion.

Captain Comet is the perfect character to explore both the more grounded and more cosmic aspects of the DC universe. We’re expecting to get a Green Lantern Corps series in 2023, but after that, we can’t stop with them being the only medium for exploring the galaxy.

Captain Comet can also teleport to any place in the universe, making him a very important part of the DC universe. He’s the one who could get people interested in the galactic part of DC. Since James Gunn did it very well with Guardians of the Galaxy, he could certainly do the same with Captain Comet.

Doom Patrol is definitely on the list of my favorite teams in all of DC, not only because of the diverse characters but also because of how they broke through to the mainstream. They became widely recognized after their first appearance in Titans season 1. Later they got their own HBO Max Doom Patrol series. This was a remarkable thing for DC fans because the TV series version of Doom Patrol is much better than their comic incarnations.

If there were indeed plans for James Gunn to make a Doom Patrol movie, it could easily be made with the same characters and actors from the series. Not only because these actors know these characters, but because these castings are so perfect. I can’t imagine anyone else for the role of the Chief (Timothy Dalton) or Cliff (Brendan Fraser) especially.

Superman has been a pop culture icon since his first appearance in 1938. There have been many incarnations of Superman from the iconic Christopher Reeve, the likable Brandon Routh, and the sensational Tom Welling, to the doubting in himself Henry Cavill, and to the family man Tyler Hoechlin. Frankly, we can’t imagine a DC universe without Superman in it, we just can’t. The people need Superman!

When I think of James Gunn potentially joining a Superman project, I don’t think of him directing Man of Steel 2, or J.J. Abrams‘ idea of a Val-Zod movie. I think more of the Black Adam vs Superman movie that Dwayne Johnson has teased, or maybe the next Justice League movie.

A sequel or reboot of Justice League, in which Superman would be a part, could show people why he is one of the greatest defenders of this world. James Gunn could give us a full-blown action movie where not only Superman could prove himself, but other heroes as well. His strength in working with a team of stars and characters has been proven already both with Guardians of the Galaxy and The Suicide Squad.

What do you think about that choices? Do you agree with them or not? What do you think James Gunn’s mysterious DC film is? Let us know on Twitter. And if you haven’t already, check out our article about Henry Cavill’s return to the role of Superman once again!