The Case of Multiverse of Madness vs. Everything Everywhere All At Once The Case of Multiverse of Madness vs. Everything Everywhere All At Once

On May 10, 2022, actress Jamie Lee Curtis declared war on Disney. This is definitely a bit of an exaggeration. What really happened was the actress, a co-star in the A24 film Everything Everywhere All At Once, took to Instagram to attack the box office titan Doctor Strange in the Multiverse of Madness.

Curtis went after the film for being, essentially, a worse version of Everything Everywhere, saying the movie poster for Doctor Strange was derivative and that Everything Everywhere “out-marveled” any Marvel movie. While some might say that Curtis was being overly competitive and unnecessarily harsh towards Doctor Strange, what she spoke on relates to a much larger (and very real) issue that is ongoing in the entertainment world: Disney’s media and pop culture monopoly.

Why was Doctor Strange the target of Curtis’ wrath? Mainly, the two films share a somewhat similar plot, yet the arguably better Everything Everywhere seems to be overshadowed by the massively successful Doctor Strange in the Multiverse of Madness.

Judging by the numbers alone, Everything Everywhere has much better critical and audience reception than the Marvel Cinematic Universe sequel. It has earned a 95% Rotten Tomatoes score, an 8.3-star rating on IMDB, and an 81 Metascore, as opposed to the Doctor Strange sequel receiving 74%, 7.1, and 60 respectively.

When comparing the two films, many publications noted that though the movies shared some conceptual similarities, Everything Everywhere used its concepts, budget, script, and actors far better. SlashFilm praised the film for more thoroughly and meaningfully exploring its science-fiction concepts, as well as developing more complete and satisfying character arcs. Judging by all of this, one might make the claim that Everything Everywhere All At Once is simply a better movie.

And yet, Doctor Strange has been vastly more successful financially. According to The Numbers, the film has made $949.6M at the worldwide box office, as opposed to Everything Everywhere, which brought in a comparatively small $85.9M (despite being released one week earlier than Doctor Strange).

So, why did Multiverse of Madness make over 10 times as much? There are, of course, a wide variety of factors in this, such as Multiverse of Madness being a sequel in a long-running franchise, Disney’s formidable marketing resources, and the film taking up a huge number of showings in theaters across the country.

Disney is an excellent example of a media mega-corporation that has diversified its portfolio to the point that it is nearly unrecognizable, and holds massive power over global media consumption. When we think of Disney, we first think of Mickey Mouse, cutesy cartoons, theme parks, and family-friendly content. However, Disney is the definition of a mega-corp, it owns countless media assets across the entire spectrum of content.

Among Disney’s many properties are an eponymous publishing company, an eponymous record label, ESPN, Hulu, Hotstar, Pixar, Marvel Studios, Lucasfilm, 20th Century Studios, Searchlight Pictures, ABC Entertainment, ABC News, ABC Signature, Freeform, FX, and National Geographic. Essentially, Disney owns a piece of everything from music to entertainment, from sports to news. From a purely economic perspective, this is a positive thing, because Disney is such a huge and successful company that is providing important entertainment, news, and so on to millions. However, monopolies such as this are a symptom of a deep cultural issue.

When a few large organizations monopolize all entertainment, media, and culture, it is ultimately up to the central hub, in this case, Disney, to regulate and control what can and cannot be broadcast to the world. This is not to suggest that Disney has some sort of evil hive mind that is manipulating all its content to control the masses. However, it’s definitely worth considering the implications of having so much content owned and regulated by Disney.

Disney has long upheld a reputation as being a “family-friendly” entertainment company. It used to go nowhere near properties above the PG rating. When Disney announced its first PG-13 rated film, Pirates of the Caribbean, it was met with plenty of skepticism. Of course, since then, Disney has churned out plenty of PG-13 rated flicks, mainly the Marvel Cinematic Universe and their recent Star Wars movies.

Essentially, Disney has massive control over pop culture. Considering Disney’s version of entertainment is oftentimes somewhat watered-down, this is kind of a problem. For the most part, Disney properties aim to please the largest possible target audience and avoid divisiveness as much as possible.

This is not to say that Disney has never directly created anything progressive or divisive. For instance, films such as Pixar’s Turning Red and Beyoncé’s Black is King (both of which are on Disney+) are excellent examples of art pieces that have drawn negative attention and are called by some “too liberal,” or treated as something to that effect.

In fact, even in Doctor Strange in the Multiverse of Madness, America Chavez’s lesbian mothers are shown in a flashback sequence. But despite Disney’s baby steps in the direction of progress, that still leaves the glaring issue of entertainment mega-corporations getting to decide on the morality and visibility of a vast portion of global culture and media.

I am not trying to dismiss Multiverse of Madness as some form of lower art; superhero movies get enough flack from the film community as it is. Overall the movie was a mixed bag for me (in terms of plot), but I was delighted by its visual and stylistic inventiveness. It felt far different from any MCU movie before it. Sam Raimi really brought his signature style to this movie, and I really appreciated how daring and surprisingly dark it was, by Disney’s standards.

However, I ultimately was left feeling a little empty because of the script itself. The film moved at such a breakneck pace that it felt incredibly difficult to become involved in the plot. Other than Wanda’s character arc, which has been built up over numerous movies and series, there didn’t really feel like a particularly strong emotional core to this film.

Doctor Stranger in the Multiverse of Madness Review 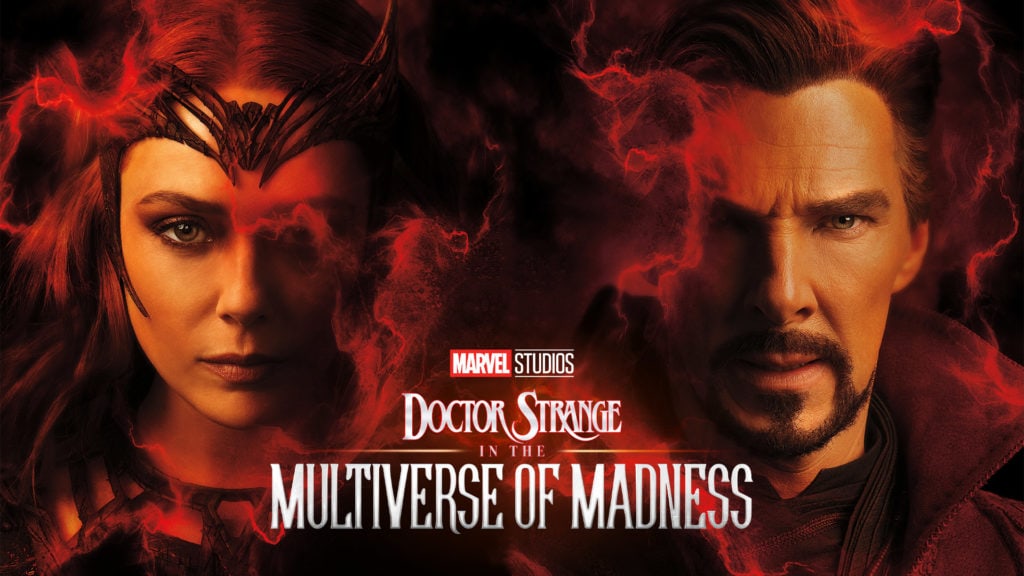 Most notably, as cool as the visual effects were, a lot of the multiverse stuff felt like it was purely done for CGI eye-candy, rather than substance. For instance, Strange and Chavez briefly travel through a universe where everything is made of paint. This makes for some cool visuals, but… why is it there? It comes off as simply being a visual gag and nothing deeper.

Ultimately, Multiverse of Madness is innovative and fun, but it feels like a movie where stuff just happens. It comes across as a vehicle to quickly and suddenly conclude Wanda’s character arc, introduces America Chavez, and throw in a couple of cameos of beloved comic characters. At its core, MOM is a relatively cut-and-dry superhero narrative where superheroes need to overcome their personal demons, do the right thing, and save the world/multiverse.

This is in stark contrast to Everything Everywhere All At Once. This film is not something that Disney would likely touch in a million years. It is hard R-rated, provocative, experimental, and it very explicitly deals with issues of race, immigration, gender, and sexuality in a way that is central to the plot rather than peripheral.

On top of being thematically rich and poignant, Everything Everywhere All At Once is wild, entertaining, zany, and often hilarious.

Moreover, it was produced by A24, the independently owned and run studio responsible for numerous critically acclaimed gems such as Minari, Midsommar, Hereditary, Lady Bird, and Moonlight. Audiences and critics alike praise A24 films for their originality, inventiveness, emotional depth, and their ability to directly deal with topics that most mainstream movie studios skirt around.

Everything Everywhere All At Once Review

So what is the issue with both movies, both studios, simply coexisting and getting along? In this particular case, beyond the obvious massive discrepancy in box office numbers for these two similar films, Doctor Strange was so high in demand that it ended up dominating showtimes in theaters across the nation and overshadowing plenty of independent films, like Everything Everywhere, in the process.

When you are a media titan like Disney, churning out high-in-demand sequels monthly, you have the power to make your properties more visible and available than those of smaller producers. The result, in this case, has been the lukewarmly-received Doctor Strange being far more successful and discussed than the arguably much better and more culturally relevant Everything Everywhere.

There is no denying that Disney’s overall unrelenting optimism and feel-good attitude have brought joy to millions of hearts for over a century now. But now that Disney is on top of the media world, owning everything from sports to news, and thereby controlling the flow of information for countless aspects of global life, it becomes clear that Disney’s more digestible, straight-forward, and under-nuanced storytelling style has the potential to be harmful to our culture.

When studios and audiences allow those fluffy, feel-good narratives to dominate over harder-hitting, more thought-provoking, and just generally better pieces of art created by independent studios, we become less rounded as a culture. We become almost afraid of touchy subjects and new ideas in general. We begin to crave the same, formulaic blockbuster projects over and over again instead of looking for new, original pieces of work.

While there is nothing inherently wrong with the relatively inoffensive products created by Disney, it would be a shame if somehow Disney became the only creator and owner of all media. If Disney someday manages to buy out even A24, and other such independent studios, who knows what our movie landscape might look like?

I’m certainly not advocating for a total collapse of the Disney empire. I, like most, get a lot of enjoyment out of straightforward, fun Blockbusters. My overall goal in comparing these movies is to advocate for more media literacy, and general awareness of what is out there besides movies and shows by Disney, Warner Brothers, and other such media mega-corps.

If you liked Multiverse of Madness but were left feeling a little let down by parts of it, I highly recommend seeing and supporting Everything Everywhere All At Once if you haven’t already. It takes the multiverse concept, the characters, and the themes much deeper and farther than Multiverse of Madness, while still being massively entertaining and enjoyable.

Additionally, I urge everyone to get out to your local indie or arthouse theater (where available) and check out a movie you’ve never heard of before. Going to the theater to see the newest Marvel project will always be a fun experience, but going out of your way to find an indie flick is often equally, if not more, delightful, enriching, and entertaining.

Doctor Strange in the Multiverse of Madness, starring Benedict Cumberbatch and Elizabeth Olsen, is currently available to watch on Disney+ and on Blu-ray on July 26th. Everything Everywhere All At Once stars Michelle Yeoh and Jamie Lee Curtis, and is now available on digital and on Blu-Ray.