Here at The Cosmic Circus we are so excited for the new Ms. Marvel show coming this June. Despite being such a new character, Ms. Marvel’s solo title and team appearances have already made her one of the best characters Marvel has ever created! To get into her comics, you can just start from the beginning and read as much as you like. In the Quick Start are some of her most important arcs, including the same stories we expect to see in the show. There’s a lot to love, so take your time and enjoy it!

And these ~40 issues are just the beginning! Listed below is so much more, and you know what? She’s worth all of it.

So far there hasn’t been a consistent omnibus series for Ms. Marvel, but we can only hope this changes in the near future. Instead, the Ms. Marvel series has been collected as individual trades (in various sizes), so to collect the whole series you’ll have to pick up the trades one by one. In the guide below, we’ll learn the differences between the collections so you can make the best decisions for yourself. As always, I’ve also included tie-in events and side stories to embiggen your reading experience! So start from the top, take a look, and have a good time reading!

It all begins here! After getting her powers in iconic Marvel fashion, the epic journey of Kamala Khan as Ms. Marvel begins in this beloved record-breaking series by G. Willow Wilson & Adrian Alphona, under editor Sana Amanat. It’s a fantastic place to start and it’s easy to follow: Just start from issue #1 in Ms. Marvel: No Normal and read all the way to #19 in Ms. Marvel: Last Days!

The week the show’s trailer came out, Cosmic Circus writer Anthony Flagg binged all 19 issues in just two days! His response? “I’m a big fan of weird. Just anything generally weird, and Ms. Marvel is a big, warm ball of weird and fun that I felt ended too early. Her fondness of her family is something that resonated with me well. It was awesome.”

Show notes: #13-18 feature Kamran, Kamala’s crush and the male lead of the Disney+ show. The main Kamran storyline is #13-15, but he continues into #16-18, which also features Kamala’s first meeting with Captain Marvel herself! Show notes: #2 introduces Tyesha Hillman, a recurring character throughout the series, and #4-6 is the wedding of Tyesha and Kamala’s brother Aamir. The prologues of #8-12 tell the story of how Ms. Marvel’s bangles were passed down from her great-grandmother (which I also wrote about last month), as well as Kamala’s own journey to Pakistan. #19-22 feature Kamala’s family celebrating Eid, which is rudely interrupted by a shady organization named K.I.N.D.! And finally, Red Dagger is the co-star of #23-30, with special emphasis on #23-24 and 29-30. All of these story elements are expected to be strong influences on the upcoming Marvel Studios show! 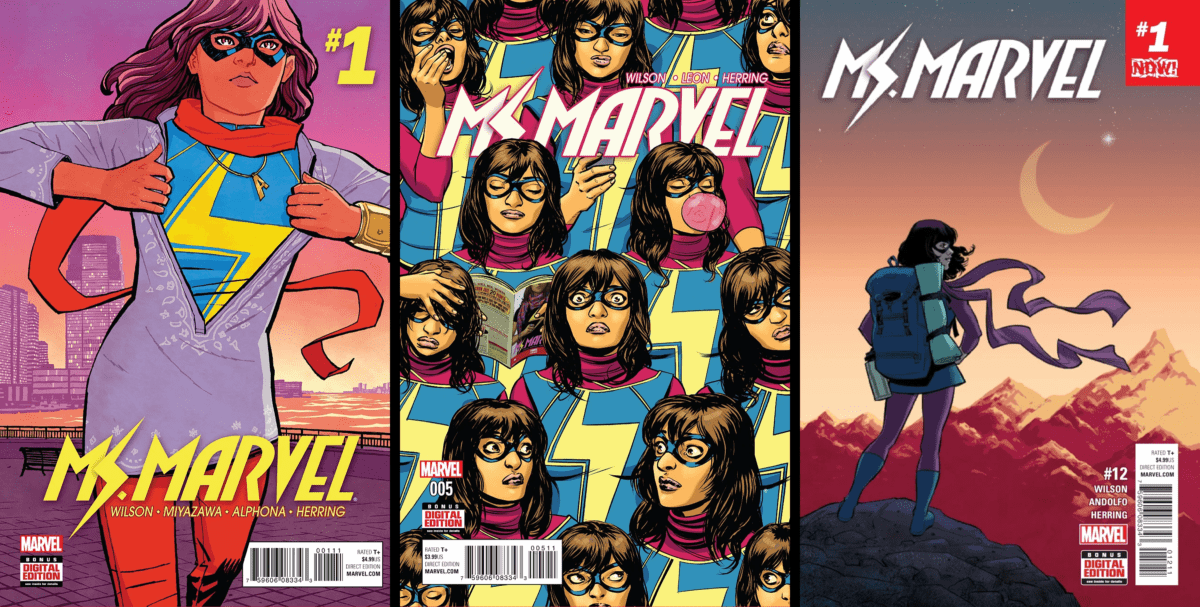 But following that was Champions, also by Waid. This ensemble book ran parallel to Ms. Marvel (2015) #13-38 and is highly recommended, with the trio of Nova (Sam Alexander), Spider-Man (Miles Morales), and Ms. Marvel being a major highlight of the title. After seeing her grow up in her solo books, it’s exciting to see Kamala Khan take up a leadership role. Like before, just read straight through, from #1 to #27. Watch out for the annual and the Avengers crossover! G. Willow Wilson stepped away, but the quality of Kamala’s comics continued! The series was relaunched as The Magnificent Ms. Marvel, with the fresh blood of Saladin Ahmed & Minkyu Jung taking over creative duties. Their fun 18-issue run recently ended with Kamala Khan’s 75th issue.

Magnificent #15-17 features C.R.A.D.L.E., another organization that could have possibly had an influence on the Disney+ show. Lastly, the “Seeing Red” and Love Unlimited short stories might have helped influence the Red Dagger/Ms. Marvel relationship in the MCU! 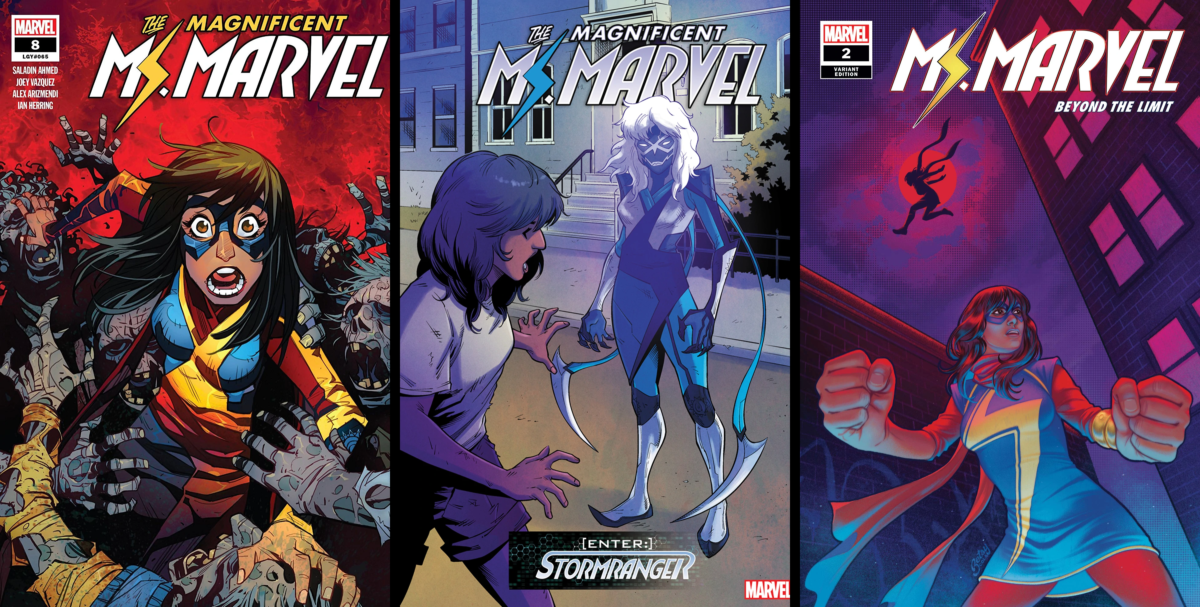 Outside of her Magnificent Ms. Marvel solo series, Kamala has also been on a bunch of teams recently. First with the multiversal Exiles, then with two runs on the Champions, a series of Team-Ups with Spider-Man and Captain Marvel, and even a miniseries with America Chavez and Squirrel Girl! 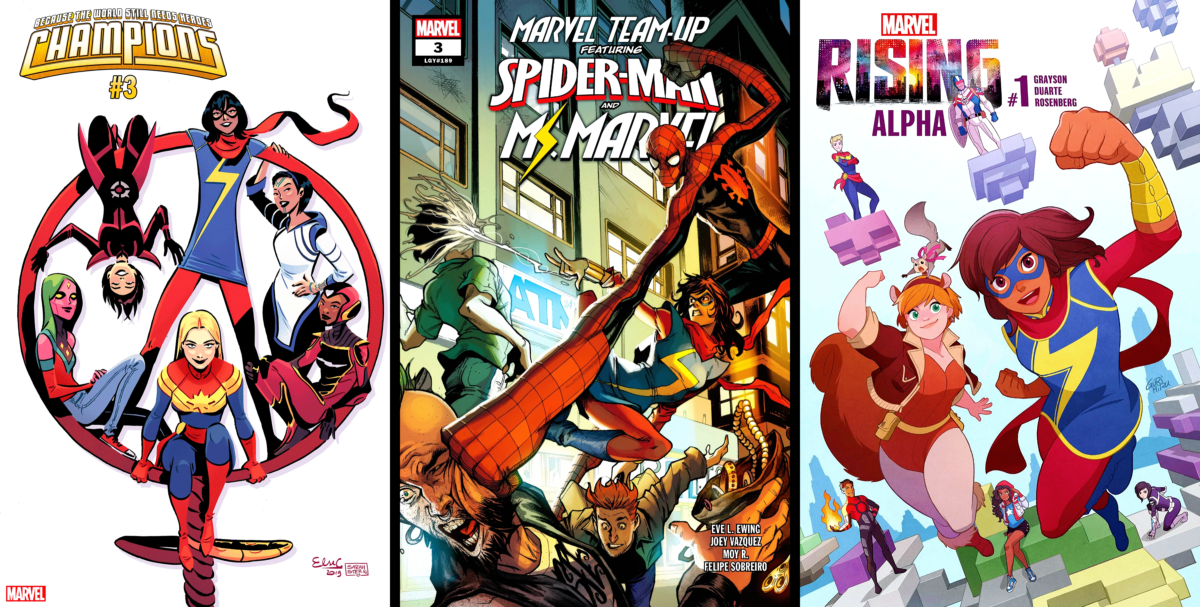 From G. Willow Wilson and beyond, that’s the history of Kamala Khan so far! Are you a new reader or a returning fan? How excited are you for the new show coming to Disney+ this June? Let me know on Twitter @vinwriteswords and remember to follow the site @MyCosmicCircus!

Lastly, thank you SO MUCH to all the wonderful fans who sent in their favorite artwork from the comics! Kamala Khan is the embodiment of all of us crazy online fans, so thank you for helping us do her justice. We tried to include as many submissions as we could, so I hope you can find your picks somewhere on this page 🙂

All images courtesy of Marvel Comics. Thank you again to everyone who sent in Ms. Marvel art!