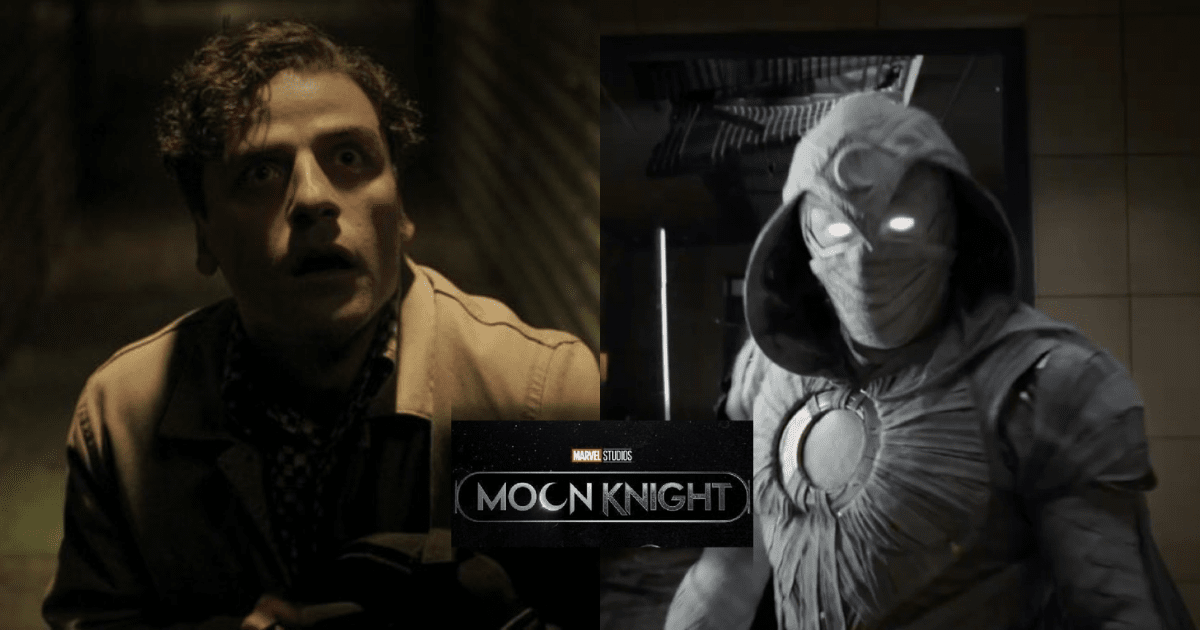 Marvel Studios has just released the trailer for their brand new Disney+ series releasing on March 30th: Moon Knight. The series features Marc Spector (played by Oscar Isaac), an ex-soldier with Dissociative Identity Disorder, who clearly exhibits lapses in his ability to remain in the moment and be aware of what is happening in his life. Here is the trailer, and my trailer breakdown as we try to piece together the reality that is Moon Knight’s world.

The trailer shows off a new side to Marvel, one that will be tackling darker and more mature themes in terms of its tone and how it’s handled, possibly without as much humor being added to relieve tension. In this article, we will break down the trailer, to determine just what we can expect from Moon Knight upon its release. Or rather, WHO we can expect to see, given the circumstances.

What’s going on in the Moon Knight trailer?

From the beginning of this trailer, it is made clear to the audience that our main character (Steven/Marc) is suffering from Dissociative Identity Disorder. Steven is not aware of this yet and is only aware that he cannot tell the difference between dreams and reality. He cannot sleep and is on the verge of breaking down in almost every situation he finds himself in.

It would appear that very early on in the trailer Steven is hallucinating images of disfigured creatures wielding historic artifacts, that end up being real people in the end. This will obviously be linked to the Moon Knight and connect to the Egyptian god Khonshu that Moon Knight originates from.

It is not made very clear what is happening here, what Steven or Marc is experiencing, in terms of the Moon Knight costume seemingly wrapping around his body in the middle of a street. The exact purpose of his Vigilante persona is still unknown, and it’s not clear how he is turning into the role either. The villain of the series, however, may not actually be the gods or eldritch creatures he is seen attacking, but the character we were introduced to just before the transformation took place.

After much speculation about his role, Ethan Hawke’s character has finally revealed to be an older male, wielding a cane, whose presence alone causes those around him to bow on one knee as he walks through the crowd. While this appears unrelated to the current crisis Steven/Marc is experiencing, it could actually be linked to the cause of these events.

Closed captioning on the trailer has revealed Ethan Hawke’s character to be named Arthur Harrow. Harrow is seen observing Steven, and claims that there is “chaos within you”. This revelation shocks Steven, and is then followed by the transformation, voiced over by Arthur, heard saying “Embrace the chaos.” It is unclear if this Arthur Harrow will be a combination of characters from the comics, as Marvel Studios sometimes does, and not necessarily solely based on the comics character.

Our hero is very confused as to what reality is, meaning that Arthur may use this to his advantage, and may have been the reason Steven/Marc becomes the Moon Knight in the first place, by encouraging him to let the chaos inside him take control, and use it.

Of course, it begs the question of why Arthur would manipulate him, despite having just met him, but given we’ve seen his influence on the townspeople already, making them kneel in his presence, there is potentially a cult-related factor in this. Moon Knight clearly intends to discuss the role of Gods, and Arthur Harrow’s following already portrays him as some sort of leader in an unsettling manner. Harrow may even consider himself a ‘God’. His following includes armed henchmen, which only adds to the villainous cult leader vibe that he gives off from the moment he is introduced.

There is the potential that this series could portray Moon Knight as a villain at first, with a great power being wielded by an unstable man. It could also turn out to be a case of manipulation by someone who simply wants to take these powers for himself.

Another character revealed thanks to subtitles is that of May Calamawy’s character. You may recall we had a report on this a few weeks ago, saying that we had heard that the actress is playing a character named Layla. You can read our full report and the speculation about who Layla might be HERE.

The trailer gives off incredible psychological thriller vibes, with intense theatrical music, alongside a popular song (“Day ‘n’ Nite” by Kid Cudi) and a constant tone shift in terms of how we view Steven/Marc’s confusion of his own identity.

The trailer frequently skips through multiple scenes, dragging the viewer through experience after experience resulting in confusion. This helps us understand the main character’s world better, as this is what his life has been like so far. The trailer displays Steven’s confusion again in a scene where he answers a phone and finds a woman relieved he is alive on the other end, even though he does not know who she is, or why she’s calling him Marc.

It’s hard to say what is real, however. It is made clear that Steven/Marc is not doing very well mentally as he struggles to see the reality of his life, and has frequent hallucinations. Is what Moon Knight is beating up really an eldritch creature wielding historical artifacts or is it simply a dream state? It seems highly unlikely that Marvel would use that storyline here, but the main character is currently confused and scared, meaning manipulation is very likely to occur, which adds to the mystery.

What Is Going To Happen in this show?

The series trailer expertly portrays a confused state, and timeline of events, by constantly placing the viewer in scenarios that happen far apart from each other. I suspect we will see the tone and camera style shift as Marc’s identities do.

It’s hard to know what to expect for certain in this new series, but one thing is made clear. This series will NOT be like any other we have seen. The tone of this series is set from the beginning of the trailer. The audience is placed to feel as Steven/Marc does; when he is confused and afraid, we are too.

Mental Health will clearly play a major role for this character. He is there to remind the audience that struggles with mental health are okay, and it’s my hope the show focuses on this by continuing to discuss and showcase Dissociative Identity Disorder in a realistic manner. The show will be intense, and perhaps even distressing for some, but I believe this to be a good thing for the future of the MCU. This show may help viewers understand mental health struggles better, and encourage future discussions about these conditions.

Overall, it’s not entirely clear what exactly is happening in the series, especially for viewers that have not read the comics, but based on the trailer, these are the basics we can figure out:

There is a lot to be intrigued and excited by from this show from the trailer alone. But I am still admittedly a little wary. Time will tell just what kind of show we’re in for starting at the end of March, but I believe it could be the most popular and successful yet.

What did you think of the trailer? Excited, or scared? Let us know in the comments below or on social media! And lookout for more Moon Knight content coming your way!