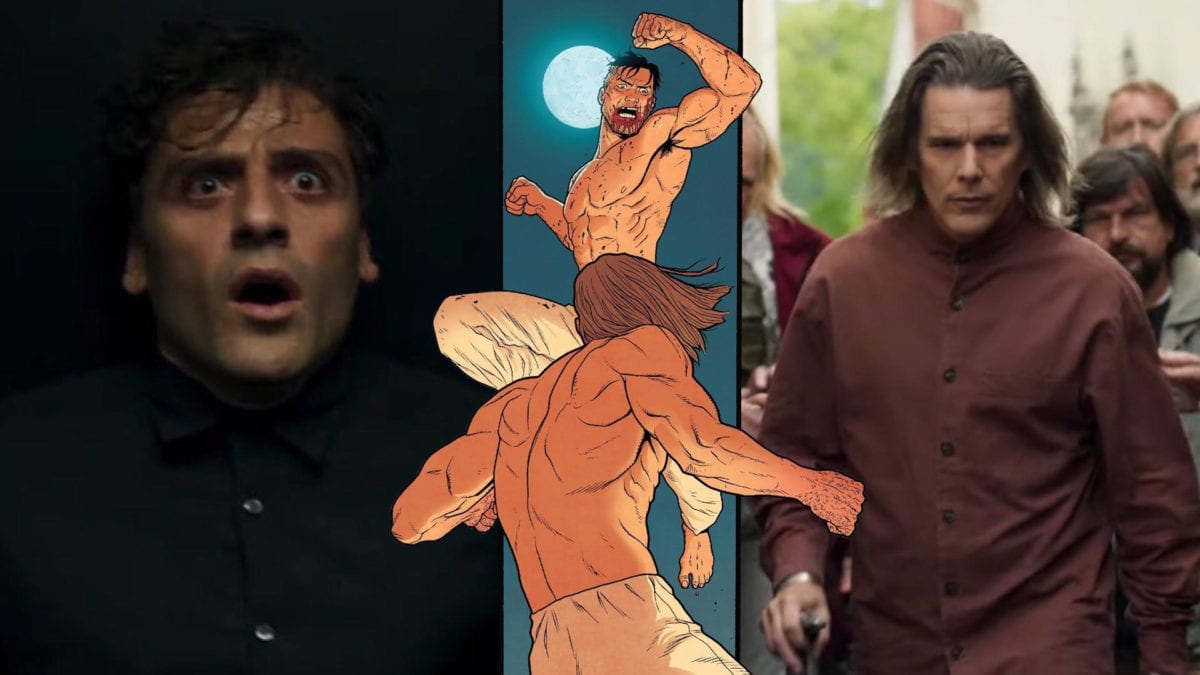 Ever since its announcement back in 2019, fans have been waiting to see what the premiere of the MCU’s Moon Knight will look like. Now, a little over 2 years later, we finally have a trailer for the upcoming series starring Oscar Isaac and Ethan Hawke.

One of the biggest mysteries has been who the villain of the series will be, and this trailer finally gave us enough to piece together who the antagonist of the series is. You couldn’t nab a more fun and interesting actor than Ethan Hawke, and it looks like they’ve paired him with one of the most charismatic and intimidating villains of Moon Knight’s comic past.

Who Is Ethan Hawke Playing?

Before the trailer’s release, one of the prevailing theories was that Hawke would be playing the Marvel Comics version of Dracula. While it’d be a good enough reason to shoehorn in Mahershala Ali’s Blade, there was more than enough footage of Hawke wandering around in broad daylight to gather that he’s probably not a world-famous vampire. Moving on…

Subtitles on the trailer have revealed that the character goes by the name of Arthur Harrow, which rang about zero bells across the collective comic book fan consciousness. In the comics, Arthur Harrow is a character with probably about as little an impact as you can get. He only appeared one time over the years in a single 1985 issue (Moon Knight Vol 2 #2) and left very little in the way of a reason to remember him.

Harrow was a scientist that had a facial defect that drove him mad with agonizing pain. That, in turn, drove him to do some pretty messed-up experiments in the search for a cure for himself. While the trailer directly named that character to be Arthur Harrow, seems as though there’s more going on here – especially since Hawke’s character seems to adopt zero of the defining traits of Arthur Harrow.

There seem to be a couple of key defining traits, as shown in the trailer, that we could use to deduce an identity. Number 1 is that he seems to be a sort of charismatic leader. Number 2, and more interestingly I think, is the way that he talks to Steven/Marc.

The character that I’m thinking of is one that has a sense of elevated nature. The way that he talks and the way that he acts gives the notion that he probably thinks he’s better than you, and a lot of that is the very reason he acquires this cult of followers.

Right now, I think that Ethan Hawke is playing a version of the Sun King that has been combined with the Harrow character somehow. Marvel has done a similar combining of characters to fit into the MCU before. In the comics, Sun King (or Patient 86, as he has no name) has only appeared in one arc but unlike Arthur Harrow, he made quite the impression in the only 8 issues of that arc.

Who Is The Sun King?

Throughout the comic arc, Crazy Runs in the Family (Moon Knight Vol 1 #188-193, 199-200), we are introduced to this “Patient 86” as he is diagnosed and treated by a “Doctor Emmet.” Doctor Emmet is a crucial part of 86’s story as she leads him on a journey towards further delusion.

Dr. Emmet uses her past with Marc Spector as a way to help 86 with his sense of self, so she introduces 86 to the Egyptian god Amon Ra hoping that the relation to the god would help ground 86 the same way she thought it did with Marc. However, the plan backfires when that relation with Ra imbues 86 with that very sense of self-grandeur and elevation I was talking about earlier. That sense of greatness that puts him above everyone else, and what leads him on the journey to kill the avatar of Ra’s son, Khonshu – and puts Moon Knight right in the crosshairs of this fire-wielding god.

But still, none of that explains why 86 would be going by the name of Arthur Harrow; so I put together a theory. In the comics, the main reason we see Doctor Emmet taking on 86’s case is due to her past with Marc Spector. That’s the very thing that leads her to the conclusion of giving 86 an avatar to ground him.

But with the Disney Plus series focused on Moon Knight’s origin story, it’d be hard to use that character and their motivations. So, what if they changed Arthur Harrow to the doctor who treats 86? A man with agonizing pain who tries to treat people with special gifts so that he can solve his own issues. But, upon 86’s uprising, he gets killed, and 86 steals the name Arthur Harrow for himself.

There’s also the strong possibility that Kevin Feige and Jeremy Slater have just joined the two characters together. Perhaps who was once “86” is now just Arthur Harrow – a man with burning agonizing fire inside of him who’s driven mad by the curse (or gift) he’s been given.

The brilliance of using a character like Sun King is that the lack of background is what makes him so harrowing (pun intended). That mysterious past and the lack of information on the things that led him here is really what elevates the idea of a god-like man. Maybe the audience even starts to believe what he says; that’s exactly why it could work. You don’t have to spend all this time establishing who he is. In fact, the less time you spend telling us who he is, the scarier he gets.

Also just a little side note: the use of the Kid Cudi song “Day ‘N’ Nite” in the trailer would certainly be a fun allusion to the contrast between the Sun and Moon gods Amon Ra and Khonshu (if Sun King truly does have a role in the series). You can check out the new trailer for the Moon Knight which debuts on Disney+ March 30th below.

Do you think Ethan Hawke could be playing the Sun King? Do you think it might be someone else from Moon Knight’s comic past? Let us know in the comments or on Twitter @mycosmiccircus!