Greetings fair reader! Upon ye eyes rests the cov’td Reading Guide for the Mighty Thor! A most renown epic that hath been cherished across the nine realms for nigh over a decade, the saga of Thor Odinson and Jane Foster is now to be thine treasured tale, should ye complete the collections below. Foretelling the fable of Thor: Love and Thunder, the grand adventures gathered ahead giveth account to the complete chronicles composed by Jason Aaron, telling of the unworthiness of Thor, the rise of the Mighty Thor, and the nefariousness of Gorr!

These 52 issues cover everything you need to know about Thor, Jane, and Gorr the God Butcher before the new movie coming out this July.

At the end of March, Marvel Comics will release Thor by Jason Aaron Omnibus Vol. 1, a massive high quality hardcover containing the first four years of this groundbreaking, expansive run. Feel free to grab that collection if you’d like, since it’ll make it super easy to read and follow everything in one place. For now I’ve chosen to focus on the other trade paperbacks in order to clear some of the confusion from the more complicated collecting formats.

So read on! In the guide below, we’ll go into depth on the different ways these comics have been collected, as well as some additional reading and tie-in events that could help enhance your reading experience. Strong recommendations are in bold. Enjoy reading!

Whosoever reads these books, if they be worthy, shall possess the power of Thor!

The time-spanning epic begins here, with Gorr the God Butcher! Who is this beast and why does he butcher gods? Read on to find out! You’ll also get to meet young Thor and old Thor and maybe some more Thors in between!

This series is not included in the Thor by Jason Aaron & Russell Dauterman hardcover collection. 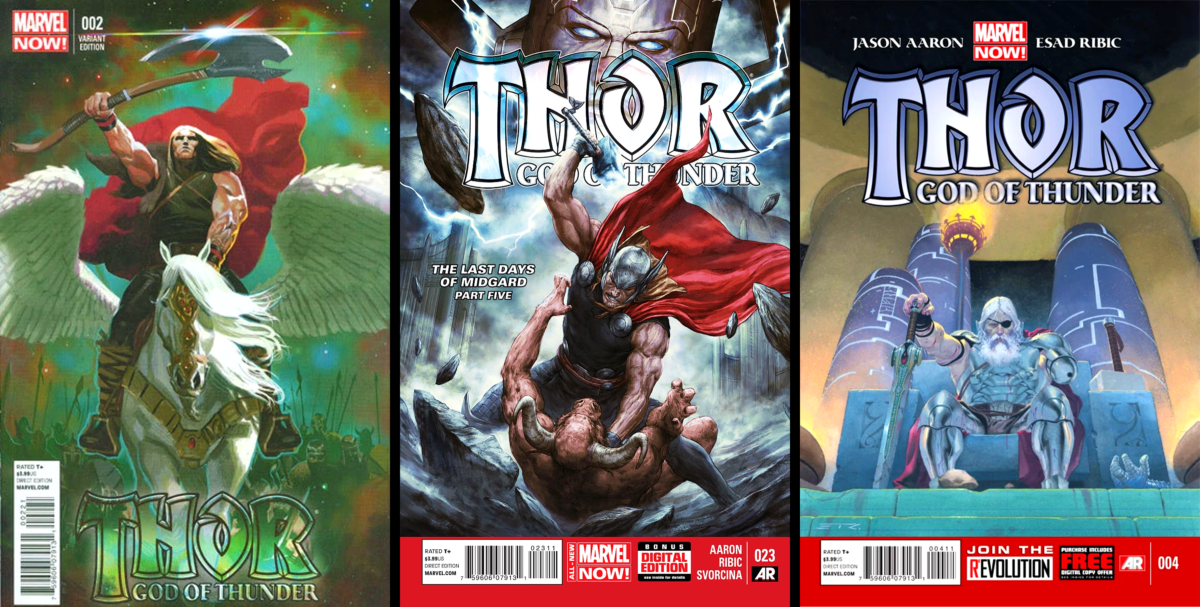 Thor becomes unworthy after learning a secret about Gorr! Could we see something similar in Love and Thunder?

Original Sin was a strange storyline that’s not great and mostly skippable. It’s technically important for the Thor/Mighty Thor transition, but everything you need to know is recapped in the main Thor comics. Feel free to move on to the next section if you want. 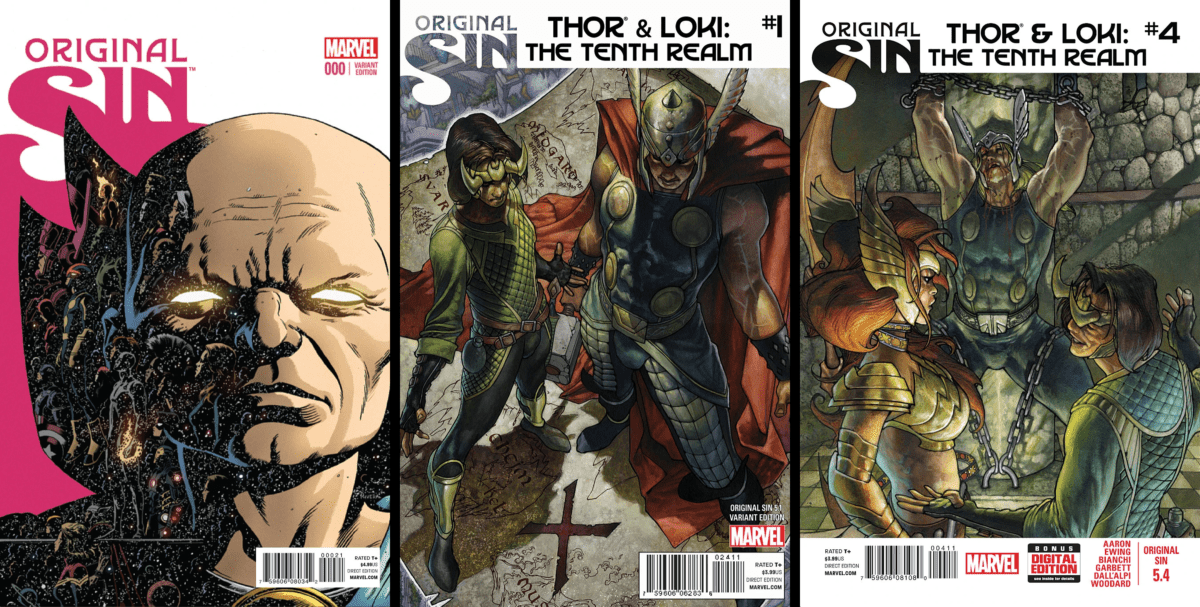 Following Thor’s unworthiness, a new Mystery Thor has appeared! But she has a mysterious secret, and being a hero may come with a cost…

A quick recap Jane Foster’s history up to this point:
In the vein of typical silver age superhero comics, the Jane/Thor relationship started as a love triangle between Thor, Donald Blake (Thor’s human alter ego), and Jane. As Thor grows closer to her, he struggles with Odin’s disapproval, to the point that Odin eventually wipes Jane’s memories of Thor. Having forgotten everything, Jane moves on, marries a doctor, has a son, and becomes a doctor herself. But when Thor comes back into her life, she leaves her family and follows Thor to Asgard. In short, Marvel never really knew what to do with a flat love interest like Jane Foster. That is, until Jason Aaron changed everything. The pinnacle of Jane’s time as the Mighty Thor! Meanwhile, classic Thor gets his own Unworthy Thor miniseries, which runs parallel to Mighty Thor (2015) #19. And picking up from Secret Wars, Ultimate Mjolnir shows up from across the multiverse! After the finale of Mighty Thor, the original Thor has to reclaim his title! This leads into War of the Realms, the bombastic line-wide event finale of Jason Aaron’s 8-year saga. Finally, flashforward with King Thor, the quieter 4-issue epilogue focused solely on Thor. Jason Aaron continues his work with Jane Foster as a Valkyrie and leaves Thor to the new creative team of Donny Cates and Nic Klein. Following the events of War of the Realms, both characters receive significant upgrades, with Jane being chosen to wield the all-mighty All-Weapon and Thor becoming not only the new All-Father, but the Herald of Galactus as well. And that’s the Mighty Thor saga! Jason Aaron’s unforgettable epic stands as one of the greatest comic runs of all time, and it’s thrilling to imagine how it could continue to influence the MCU in Thor: Love and Thunder and beyond! How much have you already read? What are you reading next? Let me know on Twitter @vinwriteswords and remember to follow the site @MyCosmicCircus!

Be sure to check out our other reading guides here, share the links on social media, and stay tuned to the Cosmic Circus for more coming soon!